Eddie Jordan called it "poetic justice". Mark Webber described it as "an appointment with karma". Red Bull team principal Christian Horner said it was "a great team result". But whatever your view of Webber's victory in the British Grand Prix, it is difficult to see how it will do anything other than store up a whole load more trouble for Red Bull Racing.

There have been a fair few angry racing drivers at various points during this brilliant Formula 1 season, but it is hard to recall one more upset than Webber was after qualifying on the day before his dominant win.

In the seeds of that emotion lay the result of the race - good for Webber and bad for team-mate Sebastian Vettel, who finished seventh after suffering a puncture caused trying to prevent the Australian passing him at the start.

As he sat in the news conference at Silverstone on Saturday afternoon, Webber, face like thunder, could barely even bring himself to look at Vettel, who had just beaten him to pole position.

Webber's anger had been provoked by a team decision an hour or two earlier to take the only remaining new front wing off his car and give it to Vettel after the German's similar wing had fallen off in final practice and been damaged beyond repair.

Red Bull responded angrily on Saturday afternoon to suggestions that the decision - which Horner said was his - was evidence of favouritism towards Vettel.

But neither I, nor any journalist I know, could find anyone in the paddock outside Red Bull who shared their view. Most were flabbergasted by it to the point of incredulity.

"They did what?" asked one veteran technical boss, when the story was relayed to him. Another simply described Red Bull's actions as "ludicrous", adding: "To take it off one car and put it on another - I've never heard of that. Unless you have a clear number one driver and a novice, in which case you'd give the number one both wings."

Horner's argument was that it was not Vettel's fault that his wing failed in practice, that the incident left the team with only one, and he had to decide whom to give it to. 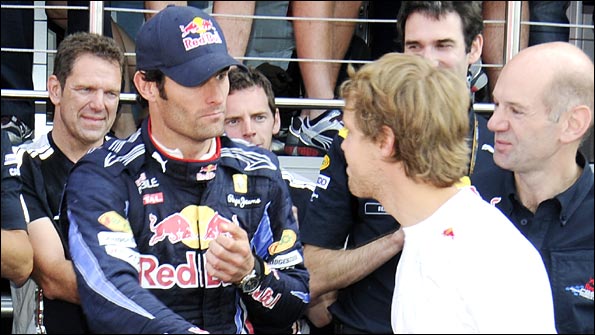 Webber's stare speaks volumes as Vettel congratulates him on his win. Photo: AP

He claimed the advantage the wing gave was minimal - the common view from speaking to people at Red Bull was that it was worth about 0.1secs a lap - and he added that he made the decision on the basis that Vettel was ahead in the championship and had expressed slightly more preference for it on Friday.

Any suggestion that the decision was effectively saying Vettel was the de facto number one driver was batted back.

It is absolutely clear that Red Bull bosses do not understand why the rest of F1, and most of the media outside Germany, perceive this as favouritism towards Vettel. They think they are being even-handed.

"Mark knows how we operate as a team," Horner said. "He knows there was no malice behind it or manipulation."

But that is not the way it looks to most observers - and that has absolutely nothing to do with Webber's popularity as a man in the paddock.

The wider view within F1 is simple:

You have two cars and two new front wings, which give a small advantage. One of the wings falls off one of the cars and cannot be used again. That's bad luck for that driver.

If you are treating your drivers equally, that one reverts to the old wing and the other continues with the new one. Any intervention by the team to change that is altering the natural course of events and, by extension, manipulating them.

The problem for Red Bull in terms of public perception and - more importantly - the rising tensions within the team is that this comes six weeks after the controversy at the Turkish Grand Prix, when Webber and Vettel collided while disputing the lead.

The team's immediate response to that - effectively blaming Webber for an incident that most thought Vettel was more responsible for - was perceived as being the final confirmation of what had been suspected for some time - that Vettel was Red Bull's favoured driver.

Even without that, Horner's decision on Saturday would have been regarded as favouritism. Add the two together, and it becomes even harder to see it any other way, regardless of whether the team mean it that way or not.

Of course it is Red Bull's prerogative to treat their drivers in any way they see fit - but they can't have it both ways. If they want Vettel to be their lead driver - and it would be understandable if they did - they can't at the same time claim to be treating them both equally, and employing Webber on those terms.

One senior figure in F1 described Horner's decision as "declaration of war" by Red Bull against Webber, adding: "It guarantees trouble at the first corner."

His prescience was remarkable. Webber made a better start than Vettel, who squeezed his team-mate towards the pit wall before realising he had no choice but to give way.

With nowhere to go because Lewis Hamilton's McLaren was coming up the inside too, Vettel tried to sit it out with Webber around the outside of Copse, the 170mph first corner, which was never going to end in his favour. And he got a puncture after a touch with Hamilton, ruining his race.

So yet again Red Bull have failed to capitalise fully when they had the fastest car, the two drivers have swapped positions in the championship, but remain third and fourth, and McLaren drivers Hamilton and Jenson Button have consolidated their advantage.

In Hamilton, Red Bull face a rival who is absolutely at the top of his game and on Sunday brilliantly salvaged a second place from a race that, on Friday evening, looked like turning into a disaster for McLaren. It was a stupendous performance by the 2008 world champion - and Button's in finishing fourth from 14th on the grid was very nearly as good.

Meanwhile, not only are Red Bull not realising their potential, but they are letting their rivals score more than they should, and they will not have the car advantage they had at Silverstone at all the remaining races.

On top of that, these rows are driving a wedge inside the team.

"Not bad for a number two driver," Webber said on the radio on the slowing down lap. "Do you think you'll manage a smile now?" Horner responded.

And Vettel made thinly veiled remarks that seem to have been aimed at Webber: "Sometimes good and bad you get to know people a little better and see their true faces. So I think I have learned my lesson and focus on myself."

Horner said after the race that having "two such competitive drivers" was a "very good problem to have". That may be how he sees it. But from the outside it looks like it might end up costing Red Bull a championship that has always been theirs to lose.