Welcome to the latest edition of our classic grand prix series, which focuses on the German Grand Prix.

We have come up with four great races from the event's history and we want you to tell us which one is your favourite - and why.

We will then use those views to help us decide which one to highlight next week in the run-up to this year's German race. That means we will show the 'Grand Prix' highlights programme in full, as well as the shorter highlights edit we cut for all the races.

It is Hockenheim's turn to host the race this year, after the Nurburgring held it in 2009, and all of our selection, with the exception of 2009, are from the era of the old Hockenheim track - with its four-mile-plus layout blasting through the forests and through three chicanes before returning to the Stadium section that survives on the current layout.

1986 is in by popular request, after its omission from last year's list caused an uproar.

The race was ultimately won by Williams-Honda driver Nelson Piquet, and was one of the rare races that year in which his team-mate Nigel Mansell was uncompetitive. But it was not an easy win for the Brazilian - he fought a race-long battle with the McLarens of Keke Rosberg and Alain Prost.

Unusually, Rosberg was the more competitive of the drivers in the red and white cars in a season in which Prost, fundamentally, pulverised him; even more surprisingly, the McLarens had locked out the front row at a track where power was a critical part of a competitive car.

Their TAG Porsche engine had been left behind by Williams's Honda by this stage, but for the German race the team introduced new turbochargers, and they certainly worked in qualifying.

But the two men made poor starts and Piquet, who had qualified fourth behind Ayrton Senna's Lotus, took the lead.

The race soon developed into a tactical battle between Piquet, Rosberg and Prost, which went on until the Williams emerged from its final stop ahead of the McLarens, with the win clearly in his pocket.

Rosberg and Prost looked set for the final two podium places, but on the last lap it all went wrong.

This was F1's fuel economy era, and cars were allowed to use only 195 litres of fuel for a grand prix. The McLarens were usually among the most efficient cars, but that afternoon they got their calculations wrong and both men ran out on the last lap, and were classified fifth and sixth.

Prost, whose car spluttered its last coming out of the final corner, provided some late action by trying to push it over the line - but he couldn't make it.

Our next choice, 1994, features one of the biggest first-lap pile-ups in F1 history.

Four backmarkers tangled off the grid, and then a collision between McLaren's Mika Hakkinen and Williams's David Couthard at the first corner caused chaos. All in all, 10 cars were taken out - and Jean Alesi's Ferrari joined them before the end of the first lap, thanks to an electrical failure.

Alesi's team-mate Gerhard Berger, who had started from pole position, went on to dominate the race, after the challenge of world championship leader Michael Schumacher in the Benetton ended on lap 19 with an engine failure. 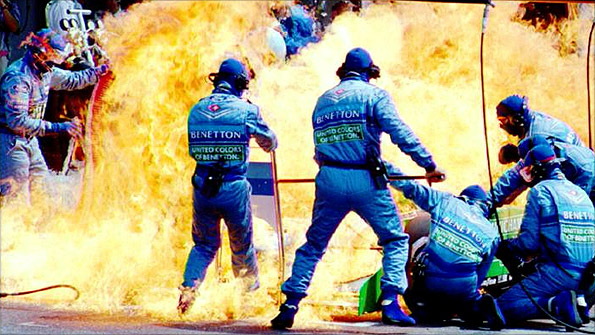 That was the least of Benetton's problems, though, for four laps later Schumacher's team-mate Jos Verstappen had made his pit stop for tyres and fuel - and the car was engulfed in flames following a leak. Amazingly, neither Verstappen nor any of the mechanics were seriously injured, although the driver and some pit crew did receive minor burns.

The incident turned into the latest of a series of controversies that engulfed Benetton that year. Investigations established that Benetton had removed a filter that was there to stop debris getting into the nozzle and causing problems with it attaching to the car.

Removing the filter speeded up the flow of the fuel by 12.5%, giving the team an advantage at pit stops - one reason why their strategy was so often so effective until that point.

Benetton blamed the removal of the filter on a "junior team member" and were not punished after it emerged that fuel rig manufacturer Intertechnique had allowed teams to remove the filter.

Two years later, the attention was all on Damon Hill, who arrived at the German Grand Prix amid a storm of speculation about his future after Autosport magazine had published a story - written by yours truly - saying he was going to lose his Williams drive at the end of the year.

The story was correct, but as it was written about the man running away with the championship it generated widespread disbelief in the paddock, not least from Hill himself.

The Englishman responded well to the pressure, setting pole position, but a poor start left him behind both Benettons, with Berger ahead of team-mate Alesi.

That put Hill in a difficult position, as he was on a two-stop strategy and the Benetton drivers were only making a single stop. Now they were in front of him and holding him up, Hill's strategy was going to pieces as he was unable to run at his own pace and build the gap he needed to make it work.

He drove out of his skin after his first stop to try to make up for lost ground, and succeeded in leapfrogging Alesi - but Berger was still just ahead.

Try as he might, though, Hill could not get past until three laps from the end when he had a slice of luck - Berger's engine failed and the Williams swept by to win.

Berger got payback a year later during an emotionally charged weekend. The German Grand Prix was his first race for six weeks after sinus problems left him on the sidelines, and shortly before the race his father was killed in an aircraft accident.

On arriving at Hockenheim, Berger announced to the media - following Benetton's announcement that they had signed Jordan's Giancarlo Fisichella for 1998 - that he would be leaving Benetton at the end of the season (and F1, as it turned out, although he did not admit he was retiring at the time).

With a point to prove, he set pole position and led much of the race. In a reverse from the previous year, though, Berger was on a two-stop strategy and his rival for the win - who was Fisichella, ironically - was making just one.

When Berger rejoined after his second stop, he was right behind the Jordan and he set about placing the Italian under the heaviest pressure - and Fisichella wilted almost straightaway, making a mistake at a chicane and allowing the Austrian past.

Fisichella continued to chase Berger, but a puncture with six laps to go ended his hopes.

The race was also the scene of Rubens Barrichello's famous "blah-blah-blah" comment - uttered when he explained why he was not interested in hearing the Brawn team explain how they had not deliberately messed up his race, which he started from the front row, led, but finished sixth.

A tricky choice, then. I look forward to hearing your views.