Welcome back to our classic grand prix series.

Regular readers will know we took a break in our trawl through the rich Formula 1 archives for the European Grand Prix because of the demands of the World Cup and Wimbledon. But we have a truly tasty selection for you ahead of the British race at Silverstone next weekend.

For those of you less familiar with this feature, we pick four great races from the past, as well as last year's grand prix at that venue, and ask you to tell us on this blog which is your favourite.

We use those responses to inform our choice of which race to highlight - that means we broadcast the full 'Grand Prix' highlights programme of the time for that race, as well as the shorter highlights package we cut for all the races.

The 1982 event - the first of two choices this time that were held at Brands Hatch, which used to alternate with Silverstone - was won comfortably by McLaren's Niki Lauda, who took his second victory of his comeback year. But it is remembered for a remarkable performance by Toleman's Derek Warwick.

The Englishman had qualified 16th in the unlovely and uncompetitive Toleman-Hart TG182, which until race day at Brands had not troubled the usual front-runners. But as the race began to unfold, something odd started to happen.

At first, Warwick's progress went unnoticed. In a dramatic start, pole-winner Keke Rosberg's Williams was left on the grid as the field set off on the formation lap, and then the turbocharged Brabham-BMW of Riccardo Patrese, which was second on the grid, stalled at the start and was hit from behind by Rene Arnoux's Renault. 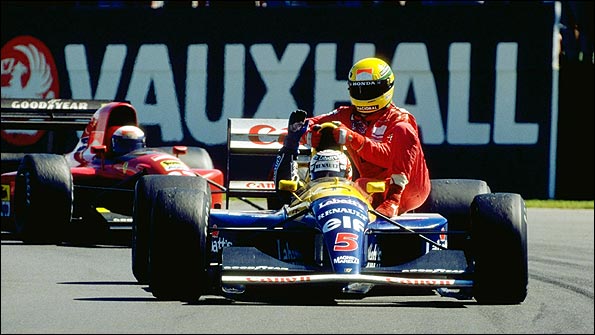 Senna hitches a lift back to the pits with Mansell at Silverstone in 1991. Photo: Getty

That put Patrese's team-mate Nelson Piquet in the lead.

Brabham had brought along refuelling equipment for the first time, a huge novelty when refuelling had not been seen in F1 for 30-odd years. And Patrese and Piquet both went to the grid on half tanks and soft tyres, with the aim of building a big enough lead to come in and refuel and fit new tyres and still win the race.

As was to become a pattern that summer, though, the poor reliability of the cars prevented their audacious strategy from playing out. Piquet led the early laps, but retired on lap 10 with fuel pump failure.

That left Lauda in the lead from Ferrari's Didier Pironi, but attention was starting to swing towards Warwick, who was already up to sixth place and flying.

He passed the Alfa Romeo of Andrea de Cesaris, the Williams of Derek Daly and then the Lotus of Elio de Angelis and, astonishingly, began to close on Pironi, passing him on lap 26. Warwick surely couldn't win, could he?

No. On lap 40, the Toleman ground to a halt on the pit straight with what was the team said was a broken CV joint. Only many years later did they finally come clean and admit that they had only filled the car with half a tank of fuel with the aim of grabbing a bit of valuable publicity.

Warwick's retirement promoted Pironi back into a second place that put him in the lead of the world championship for the first time - a position he was hot favourite to retain to the end of the year.

But this was the Frenchman's penultimate grand prix. Two races later he suffered a huge crash during practice at the German Grand Prix that was scarily reminiscent of the one that had killed his team-mate Gilles Villeneuve in Belgium in May.

Pironi survived, but his legs were badly broken and he never raced again.

Our next choice is 1986, another race at Brands Hatch and a thrilling battle between Williams team-mates Nigel Mansell and Piquet.

When people think of those two and the British GP, they tend to remember Mansell's brilliant recovery to pass the Brazilian and win at Silverstone in 1987. This race, in their first year as team-mates and before their relationship had completely fractured, was very nearly as good. 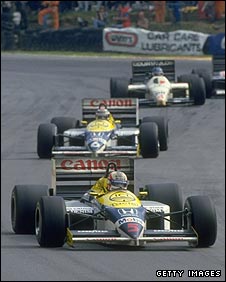 The battle very nearly didn't happen. Mansell's car failed at the first start but a multiple crash - in which Ligier's Jacques Laffite suffered leg injuries that would end his F1 career - forced a restart and the Englishman was able to take to the spare car.

He lost second place behind Piquet to Gerhard Berger's Benetton in the course of the first lap, but soon re-passed the Austrian and went after his team-mate.

With Mansell remorselessly closing in, Piquet eventually cracked under the pressure and missed a gear going into Surtees bend. Mansell dived down the inside into the lead, to the delight of the massed British fans.

They battled for the rest of the race, but Mansell held on to take his second consecutive win at Brands Hatch, following his maiden F1 victory in the European Grand Prix the previous autumn.

We switch to Silverstone for our third choice and the 1988 British race dominated in appalling conditions by McLaren's Ayrton Senna.

The win was never in doubt - Senna led throughout having started from pole position in one of his many brilliant wet-weather performances. 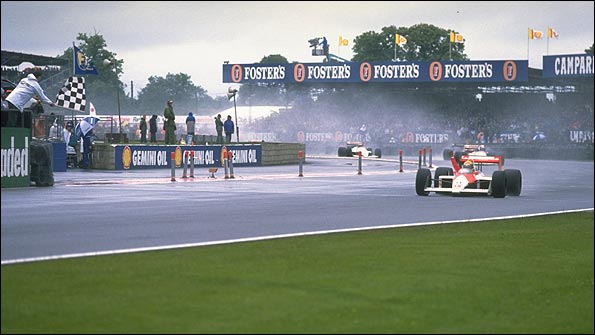 Behind him, though, there was drama. First of all, his team-mate Alain Prost, who shared the front row with Senna, struggled badly, dropping further and further back until finally controversially parking his car in the pits on lap 24, saying it was too dangerous to continue.

By this time, Mansell was tearing through the field from his 11th-place grid slot in his Williams, putting in a terrific drive that earned him second place behind Senna.

Mansell arrived at Silverstone with low expectations, driving a car fitted with a normally aspirated Judd engine on a track that was always going to favour the turbo-charged cars such as the McLarens.

He was also struggling with the active suspension that was fitted to the Williams. This was the forerunner of the system Williams used to dominate in 1992 and 1993, but at this stage it was far from bug-free. It behaved unpredictably, and Mansell was close to being at the end of his tether with it.

Williams finally gave into his demands, and worked through the night on Friday into Saturday to convert the car to conventional suspension for qualifying. Mansell repaid the team's hard work with a quite magnificent race.

Three years later in 1991, Mansell, after two years at Ferrari, was back at Williams and this time he ended the race at Silverstone on the top step of the podium.

He made a bad start from pole, and lost the lead to Senna, but blasted past the Brazilian's McLaren on Hangar Straight, and disappeared into a race of his own.

The action behind him was provided by an incident-packed race from Senna's team-mate Berger.

Senna and Mansell then produced one of F1's defining images, when the Englishman stopped on the slowing down lap to give the Brazilian a lift back to the pits.

Last year, Red Bull's Sebastian Vettel drove to an equally dominant victory. It was far from a classic, but it was enlivened by a great mid-race scrap between Lewis Hamilton and Fernando Alonso, who went at it hammer and tongs with only pride at stake even they were disputing only 15th place.

So there you have it. I look forward to reading your views.