Canada is back on the Formula 1 calendar this year, to almost universal delight from both fans and those who work in the sport.

Because Montreal is such a vibrant, historic city, the race on the Circuit Gilles Villeneuve is one of the most popular among the teams and drivers.

For fans, even those who are not in Canada, the race also promises many delights - it is traditionally one of the most incident-packed races in the season.

Canada dropped off the schedule in 2009 because of a financial dispute between the organisers and F1 boss Bernie Ecclestone. But the last two events there have truly lived up to the race's reputation.

Lewis Hamilton was centre-stage in both.

The then rookie sensation scored his maiden win in 2007, a race that also featured Robert Kubica's monumental crash. In 2008 the old karting rivals' fortunes were almost reversed as Hamilton retired after an embarrassing collision in the pit lane with Kimi Raikkonen's Ferrari, letting the Pole slip in for his own first win.

But neither of those races feature in what is our first classic races selection for Canada - the BBC only taking the UK TV rights back from ITV last year.

Instead, to whet your appetites for the race on 13 June, we have chosen a mix of what we hope will show the very best of the Canadian Grand Prix.

Your job, as regular readers will know, is to tell us which one you think is the best. We will use those views to inform our choice as to which one to highlight next week in the run-up to the race.

That means that if the selected event is from the 'BBC era' - ie before 1997 - we will broadcast the full 'Grand Prix' highlights programme shown on TV at the time, along with the shorter edits we cut for all the races.

So here's the selection:

1979 - After winning the inaugural race at what was then called the Circuit Ile Notre Dame in 1978 to become a national hero, Gilles Villeneuve did not repeat his feat the following year - but this was nevertheless one of the greatest drives by the man for whom the track was named after his death in 1982. 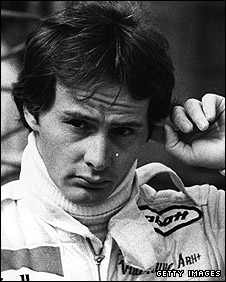 Villeneuve lined up second on the grid to Williams's Alan Jones, who had dominated the second half of the season, and the Australian's car advantage was plain to see from the 0.7-second margin between himself and the Ferrari in qualifying.

But making one of the super-quick starts for which he was to become famous, Villeneuve edged ahead of Jones into the first corners - then a high-speed esses, which no longer features on the track, it having long ago been deemed too fast and dangerous.

That was the start of an intense race-long duel between the two men as they left the rest of the field behind.

Jones tracked Villeneuve, who was working wonders to keep the slower Ferrari ahead, until the Ferrari began visibly losing grip, and Jones finally sneaked ahead into the hairpin with 21 laps to go, the two rubbing wheels as the Williams took the lead.

After dropping back a little, Villeneuve regrouped and came back at his rival, and they spent the closing laps circulating in close formation, Jones crossing the line a second ahead.

1986 - a race that confirmed the superiority of the Williams-Hondas early in a season in which one of their drivers should have won the title. Equally, though, it demonstrated partly why they ultimately lost the championship to McLaren's Alain Prost, then at the height of his powers in an inferior car.

Williams driver Nigel Mansell took a dominant victory from pole position, but Prost finished second, ahead of the Englishman's team-mate Nelson Piquet with a drive that, like Villeneuve's in 1979, was one of his best.

Qualifying only fourth, Prost moved ahead of Piquet at the start and immediately found himself being held up by Ayrton Senna's Lotus, which had qualified on the front row.

Not in the mood to hang around, Prost pulled a quite superb overtaking move on the Brazilian which was particularly brave given Senna's already well established reputation for taking a no-compromise approach.

The Frenchman went around the outside of Senna into the first, right-handed part, of the flat-out-in-top Esses, and chopped across into the following left, forcing Senna to lift and put two wheels on the grass.

It was, as my former Autosport colleague Nigel Roebuck put it at the time, "as cold-blooded a pass as any you will see" - and quite in contrast to the cautious reputation Prost developed, largely unfairly, later in his career.

1991 - from the sublime to the ridiculous for Mansell. He had dominated the race but got a bit carried away with himself on the last lap. Waving at the crowd, Mansell let the revs drop too low and the car stalled and, lacking enough power to drive the hydraulics, Mansell could not select a gear. 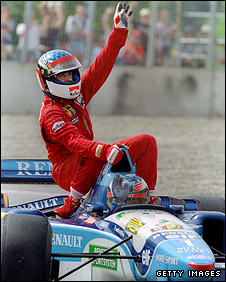 He was out of the race with less than a mile to go, and a joyous Piquet - Mansell's bitterest rival - swept by to win the race for Benetton, and totally failed to hide his joy at the Williams man's mistake.

1995 - for a long time this was looking like another routine victory for Michael Schumacher as he marched inexorably to his second world title. But after dominating the race the German's Benetton suffered an electrical problem with 11 laps to go that left it stuck in third gear.

Schumacher pitted and the team, suspecting the fault was with the gearchange paddles, fitted a new steering wheel. This solved the problem, and Schumacher rejoined in fifth place, from where he set a series of fastest laps as he chased Olivier Panis's Ligier for fourth place.

Meanwhile, the lead was inherited by Ferrari's Jean Alesi, and the Frenchman went on to score what turned out to be the only victory of his F1 career.

It sent the Ferrari-mad crowd wild as they witnessed the first win for one of the Italian cars in Montreal for 10 years.

They broke through the fences and invaded the track. Meanwhile, Alesi ran out of fuel on the slowing down lap and coasted to a halt at the hairpin, climbing out of his car and standing on its nose as it rolled to a stop.

He was given a lift back to the pits by Schumacher, an image that was given added poignancy when it emerged soon afterwards that Schumacher would be taking Alesi's seat at Ferrari the following year.

1998 - one of those races that has forged Montreal's reputation for providing non-stop action, this was an incident-strewn classic. 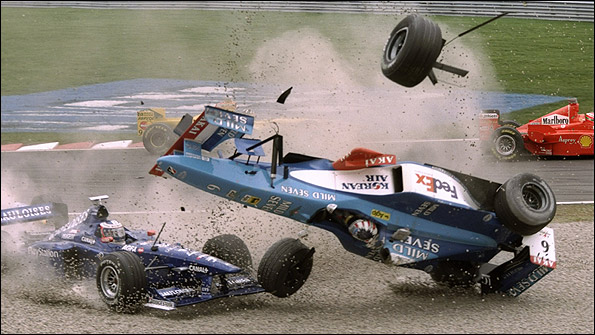 Wurz's specacular crash was just the start of the drama in Montreal in 1998. Photo: Getty

There were two first-corner crashes - one at the re-start after Alexander Wurz had rolled his Benetton at the first green light; two safety cars; Jacques Villeneuve threw away the chance to emulate his father's victory on his home track with a crass error; and Schumacher won despite a 10-second penalty for driving Williams's Heinz-Harald Frentzen clean off the track upon rejoining from the pits.

Quite a choice, I hope you will agree. I look forward to reading your responses.