Formula 1 has announced a major drive to cut the sport's carbon emissions and doubtless that move, by a sport renowned for its profligacy with resources of all kinds, will be greeted with cynicism in some quarters.

But this is not a shallow effort to win some cheap brownie points; this is a genuine attempt to help the world consume less fossil fuels and emit less greenhouse gases.

Of course, there is some self-interest involved - on several levels.

F1 bosses recognise that, in a world of diminishing resources and rising global temperatures, there is a risk that, sooner or later, questions may well be raised about a sport that literally burns fossil fuels for fun.

Although the actual carbon emissions created by F1 are miniscule on a global level, the sport's high profile as an activity that effectively glamourises and popularises machines that are responsible for a significant proportion of the world's greenhouse gases - cars - makes it vulnerable.

Beyond that, F1 teams need money to race. And they have struggled to attract sponsorship from certain types of companies because the sport's image runs counter to the one those companies wish to project.

Essentially, F1 has become known as a sport that more or less defines the phrase conspicuous consumption, with a dose of dubious ethics thrown in for good measure. 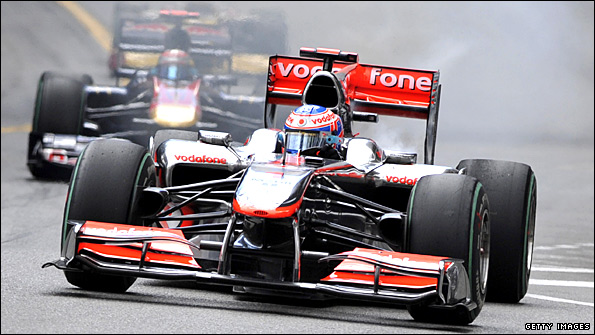 Beyond that is something called "corporate social responsibility", CSR for short, which all major companies are taking increasingly seriously.

Essentially, it's about doing - and being seen to do - the right thing. Partly because it's the right thing to do, and partly because of sound business reasons - if you are seen to be acting in the interests of the wider world, then other companies with similar views are more likely to do business with you.

It's easy to turn around and say CSR is fundamentally about finding ways to make more money; but those companies engaged in it see that as a cheap shot.

It is a capitalist world, they would say, and they can hardly be expected to do something that is to the detriment of their business. But if by helping their business they can also do a good thing, then they will.

So that's the motivation; as far as F1 is concerned, what's the substance?

The F1 teams and the sport's governing body, the FIA, have decided to put efficiency at the heart of the sport's future. They have signed up to a plan to cut emissions by 15% over the next three years, and more beyond that - and are deadly serious about their aims.

As one insider put it to me on Wednesday: "F1 has a uniquely well-positioned opportunity - you can't make the world green by hitting a golf ball. But people need cars - and will do for the rest of our lifetimes."

The internal combustion engine will continue to be the device that powers road cars for at least another 20 years or so - no other technology is close to being in a position to replace it.

Currently, even the most efficient petrol engines still waste about 72% of the energy contained within their fuel.

And F1 feels it can play a major role in increasing that efficiency - and therefore reducing the carbon emissions produced by road cars.

There are three reasons for that:

1) F1 has a collection of some of the best engineering brains in the world;
2) the teams have the budgets and resources to give those people the space to be creative;
3) in the grands prix themselves, they have an incredibly powerful publicity machine that can play a role in popularising those new technologies.

One way of reducing carbon emissions has already fundamentally been agreed - from 2013, the current 2.4-litre, normally aspirated V8 engines will be abandoned and replaced by turbocharged engines of in the region of 1.4-1.6-litre capacity, making significant use of energy recovery systems similar to, but far more efficient than, those used in hybrid road cars.

These, it seems likely, will be part of a major change in sporting regulations that will see the amount of fuel cars can use in a race limited - and that limit reduced year by year.

That will force engine builders in F1 to produce ever more efficient engines, the lessons of which can then be applied to the engines in our road cars.

Other things are in the pipeline, too, such as looking at ways to reduce the emissions created by travelling around the world, and in operating the teams' factories where the cars are designed and built.

"The new generation of F1 bosses are people who understand how the world is changing," one insider said on Wednesday, "and want to reflect that. They want to be able to walk tall and be proud about the sport and say: 'We're not state of the art; we're ahead of that.'"