What F1's future means for the car you drive

Formula 1's power-brokers are close to defining a new type of engine to be used from 2013 - and their decision will help shape the car you drive on the road in the next few years.

F1 currently uses 2.4-litre V8s which broadly reflect the belief that a high-performance car requires a big-capacity, normally-aspirated engine that uses a lot of fuel.

But, under pressure from diminishing supplies of fossil fuels and stricter emissions regulations, both F1 and road-car manufacturers, even those who make fast sports cars, are now taking a different approach, striving to get power from increasingly efficient, smaller engines.

These new engines - both in F1 cars and on the road - will feature a reduction in fuel consumption of as much as 50%, thus moving from being big and thirsty to being smaller and more frugal. They will be smaller, and combine modern turbocharging with energy regeneration and other innovative technologies. 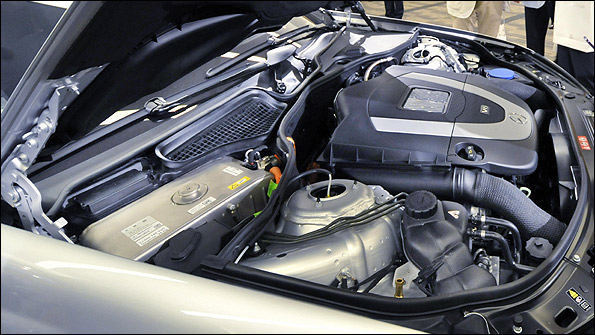 Your car engine could be affected by F1's proposed plans

BMW, which pulled out of F1 at the end of last season, already plans to use this type of engine in its new 3-series, scheduled for production in 2012. Mercedes is following suit with its range, while Renault predict that, by 2015, more than three-quarters of the engines they produce will be small-capacity turbos.

All very appealing in its own right, but F1's involvement is key here, for it will help the road-car manufacturers popularise the new technology, making it more acceptable and attractive - in much the same way as semi-automatic gearboxes, pioneered in F1, are now increasingly common and desirable in road cars.

OK, so far so good. This is the point where I get a little more technical, so please bear with me.

Negotiations between F1's power-brokers are continuing, but the new engines will be somewhere between 1.5- and two-litre four-cylinder units, using modern turbocharging and fitted with powerful electric motors that will be charged by energy that would otherwise be lost in areas such as the brakes or the turbo. These electric motors will then supply power back to the wheels.

Unlike the Kers power-boost and energy-recovery systems used by some teams in 2009 but abandoned for 2010 on cost grounds, these new 'hybrid' systems will be fully integrated into the engine architecture.

There have been recent reports, incidentally, saying that the engines will have a 1.5-litre capacity. My sources tell me that is not accurate - they are likely to be either 1.6- or 1.8-litres.

Using powerful energy-recovery systems opens up all sorts of possibilities on the sporting side, as the power-boost could be used, for example, to provide push-to-pass buttons, which drivers could use only a specific number of times in a race.

Further enhancing road-relevancy, it looks increasingly likely that Ferrari will be successful in their aim to have the new formula include a technology called 'gasoline direct injection'. This is when the fuel is injected directly into the cylinders' combustion chambers. This is much more expensive than the traditional route - injecting the fuel through an inlet port - but it improves power and efficiency.

And because filling a car up is central to the everyday user's experience, refuelling, which is banned in F1 this season, may well be reintroduced.

That's the technical bit over. Now for the politics.

The introduction of these new engines in 2013 has been the subject of high-level talks for a number of months, and a number of opposing views have had to be reconciled.

In terms of the big picture, there was pressure from some quarters for F1 to be as 'green' as it could possibly be, perhaps going as far as trying to develop a zero-emission engine that could be used in road cars in forthcoming decades.

But there were three major problems with that approach:

First, the fact that internal combustion engines will be around for several decades to come as they remain the most energy-efficient solution;

Second, the cost, at a time when F1 is trying to reduce the size of budgets;

Do that, the argument goes, and you risk the accountants who work for the major car companies deciding to pull the plug at some point in the future, claiming: we don't need you to do that - we can do it ourselves and not spend millions on you flying your racing cars around the world.

F1, it was agreed, exists in its own right as the world's premier motor sport. Any new rules have to recognise that, while also staying relevant to road-car engine technology.

On top of that, F1 will always have a problem trying to present itself as 'green', for the simple fact that any engine that produces the 700bhp or so required to keep it as the pinnacle of motorsport is, by definition, going to have reasonably high carbon-dioxide emissions and therefore not be environmentally friendly.

As it happens, though, considering their performance, even current F1 engines are paragons of efficiency. Here are a couple of facts that might surprise you:

The problem, though, is that because an F1 engine is so powerful, it still uses about 160kg (210 litres) of fuel in a grand prix. To most people, that would sound like a lot for 200 miles. The 2013 engines could reduce that to 90kg - still a lot of fuel, but a huge improvement.

Developing these new engines will cost many millions of pounds at a time when the global economy is still struggling, car sales are down, sponsorship revenue is limited and F1 is working hard to reduce budgets.

And while the car manufacturers have a vested interest in developing these engines, a way has to be found to ensure engine builders such as Cosworth - which supplies four of the 12 teams this year - can develop a budget plan to do so. The smaller, privateer teams must be able to afford to run them, too.

Cosworth is confident F1 is heading towards a workable solution. Commercial director Mark Gallagher says: "Everything we've seen suggests F1 will think very carefully before introducing regulations that will incur great expense. The new regulations are likely to be innovative but not at a huge price. We're confident we'll be able to deliver within that."

The prize here is huge. On a global level, a future generation of super-efficient road-car engines dramatically reduces greenhouse gas emissions, with F1 speeding their take-up in the general population.

As far as F1 is concerned, if the sport can shed its image of profligacy with resources - in this case, fuel and money - while embracing and helping to develop and refine road-relevant, future technologies, new manufacturers could be attracted into the sport.

My sources tell me, for example, that Volkswagen and Hyundai - neither of whom have ever been involved in F1 - have had talks about entering the sport on that basis.

So while the fine detail is yet to be resolved, one thing is clear - smaller capacity turbo engines with integrated energy recovery are the future for F1. And for the car you drive on the road.