The promised rain did not come, but Formula 1 still delivered an enjoyable spectacle at the Malaysian Grand Prix, and after Sebastian Vettel's overdue victory for Red Bull the season is shaping up nicely.

Vettel probably would have won the first two races of the year had reliability problems not intervened, but Red Bull made amends for those failures by getting both cars to the finish at Sepang in conditions as testing as they come.

Once McLaren and Ferrari had left their drivers at the back of the grid by making such a mess of qualifying, badly misreading the weather and failing to go out when the track was at its driest, this race was an open goal for Red Bull - as long as they could get their cars to the finish. 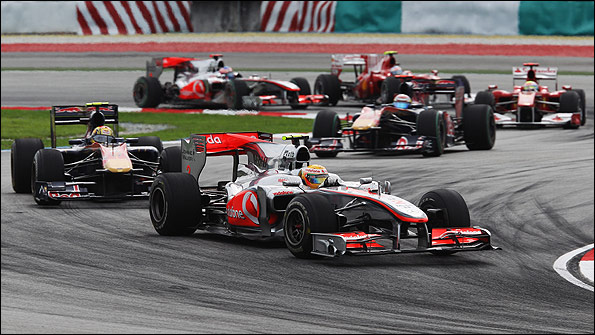 Lewis Hamilton leads the midfield pack as he, team-mate Jenson Button and the Ferrari drivers try make up ground during the Malaysian Grand Prix

As it turned out, though, the hairiest moment was right at the start, when Vettel dived down the inside of his pole-sitting team-mate Mark Webber at the first corner to claim a lead he was to lose only briefly around the time of his only pit stop.

After that, it was easy, with the only cars that would have been able to give them a race delayed by having to fight their way through the field.

Lewis Hamilton, Jenson Button, Felipe Massa and Fernando Alonso all drove superbly, but in the end their teams had asked too much of them and they were left with minor points finishes - with the exception of Alonso, whose engine failure on the penultimate lap will concern him more for what it says about Ferrari's reliability than for the two points he lost as a result.

As he put it himself: "If the gearbox and then the engine are going to break, it's better that it happens when you are ninth than when you are leading and you lose 25 points."

Hamilton, in particular, was thrilling to watch as he made his way quickly up through the field in the opening laps.

But there was great racing throughout the field - with Force India's Adrian Sutil and Renault's Vitaly Petrov mixing it entertainingly with the big boys - and the mixed strategies gave a fascinating added dimension.

In the end, Button's decision to come in early on lap nine for what he successfully hoped would be a single stop - gambling there would be no rain and mirroring his race-winning decision in Australia last week - did not pay off.

Hamilton, stopping 22 laps later, just - only just - beat him out of the pits from his tyre change, and Button's tyres had lost too much grip by the time Massa came up behind him in the closing laps to defend his position successfully.

The Englishman was able to hold back Alonso, until the Ferrari's retirement, but the Spaniard's job was made that much harder by a broken clutch, which affected his downshifts and compromised his braking - not what you need when you're trying to make up ground from 19th on the grid.

Alonso drove superbly to proceed apparently unimpeded despite that problem, demonstrating a true great's ability to drive around problems with his car. But it is the other Ferrari driver who leads the championship after the third race of the season.

Massa might have been outpaced by Alonso in the last two races - after finishing second behind him in the season-opener in Bahrain - but the Brazilian's seventh place has given him a two-point lead over his team-mate and Vettel in the championship.

Button is two points further back, tied with Rosberg, with Hamilton and Renault's Robert Kubica a further four and five adrift.

So three races in and the top seven drivers are covered by nine points and things are brewing up nicely for exactly the sort of brilliant season that most had expected.

There are, too, still so many questions unanswered.

How will Red Bull and Ferrari - the two fastest cars - compare in a straight fight throughout a race distance? Have McLaren, who appeared much quicker on pure pace in Malaysia than in Bahrain or Australia, now caught them up? How will Alonso cope with Ferrari's continuing strategy of not asking Massa to let him by even when he is quicker? Can Renault keep up their progress towards the front-running pace?

China in two weeks' time should begin to provide some answers. Bring it on.