Welcome to the first edition of BBC Sport's Classic Grand Prix series for the 2010 season.

It seems like only yesterday that Sebastian Vettel was romping to victory for Red Bull in the final race of 2009 and here we are about to head off to the Middle East again for the start of what everyone seems to agree could be one of the greatest Formula 1 seasons for years.

To whet your appetite for the main event on 14 March - and indeed every other race throughout the season - we are, as promised, running this series again.

But for any newcomers, here's a brief explainer:

Ahead of each grand prix, we trawl the archives and come up with a selection of five classic races from the past.

You then let us know, by responding on this blog, which one of the five you would most like to see - and why. We will then use your comments to decide which race to highlight in the run-up to the relevant grand prix.

Like last year, we cannot offer longer edits for races that were originally broadcast on ITV - i.e. from the years 1997 to 2008. But we have listened to your feedback and have done our best to limit the number of races we choose from where possible.

The problem with the Bahrain Grand Prix is that it has only been on the calendar since 2004 - and we used all the previous races as highlights last year.

So, in a model we will repeat in similar situations throughout the year, we have decided to choose highlights from other memorable races - in this case, other season-openers - to go along with Jenson Button's victory in last year's race.

The first of those events is the 1978 Argentine Grand Prix. This was not a great race for the lead - it was dominated by Mario Andretti's ground-effect Lotus, setting the tone for the American's world championship year - but it featured some fascinating battles for the other points positions.

It is also a reminder of the original Buenos Aires circuit before it was truncated for its brief return to the calendar from 1995-8 - and there is no doubt that track deserves the description 'classic'.

You can take my word for it, too, that the Sportsnight edit we have provides a fascinating snapshot of a bygone but fondly remembered era, both in terms of F1 itself and broadcasting on the BBC.

The next choice is the 1982 South African Grand Prix - and that really does deserve the label 'classic' in every sense.

For some reason, this is something of a forgotten race, which is a shame because it had pretty much everything - lead changes, excitement through the field, and a quite brilliant recovery drive by Alain Prost. 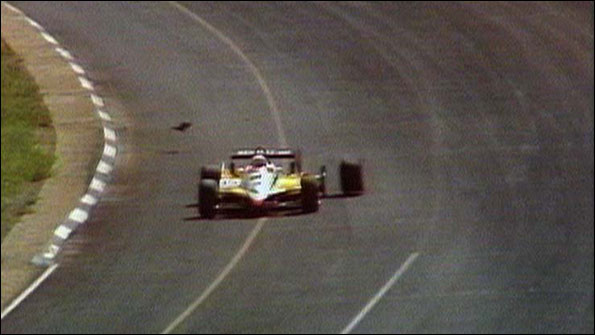 The Frenchman was dominating the race in his Renault after catching and passing team-mate Rene Arnoux but suffered a puncture that dropped him to seventh place well after half distance, from which he climbed back to take a superb win.

Prost also won our next choice, the 1984 Brazilian Grand Prix, on his debut for McLaren. It was a particularly sweet victory for Prost, for it came at the expense of Renault, who had sacked him at the end of the previous season for failing to win the championship - a failure for which he was entirely blameless.

Although Prost won, McLaren faced a real battle. In fact, though, Prost and Lauda went on to utterly dominate the year, winning 12 of the 16 races between them, with the only opposition they faced generally coming from each other.

Finally, we have the 1990 US Grand Prix in Phoenix, which was made famous by the fabulous battle for the lead between McLaren's Ayrton Senna and the Tyrrell of Frenchman Jean Alesi.

Alesi led from the start and built a lead, but was gradually reeled in by Senna. But when the great Brazilian passed the Tyrrell, Alesi had the cheek to repass him at the very next corner, and it took another lap for Senna to reclaim the lead for good.

Finally, there is last year's victory by Button in Bahrain - a win that was built on a brilliant pass of Lewis Hamilton, his new team-mate at McLaren, at the end of the first lap.

So, there we have it. I hope you'll agree that we've come up with some good choices. I look forward to reading your views, and we will publish the result in the run-up to the race next week.