The decision by a French court to overturn the bans imposed on former Renault bosses Flavio Briatore and Pat Symonds for fixing the 2008 Singapore Grand Prix leaves Formula 1 in a state of limbo.

The judgement effectively means that, for the time being at least, F1's governing body, the FIA, cannot hand down any punishments to members of F1 teams if they are found guilty of any wrongdoing.

The FIA has characterised the decision as "procedural not substantive", but I'm not so sure it's as simple as that.

What we're talking about here is that, following a scandal that the Times newspaper described as "the worst case of cheating in the history of sport", there has effectively been no punishment handed down by the governing body in question.

Judging from the FIA's statement on Tuesday - which talked about ensuring "no persons who would engage, or who have engaged, in such dangerous activities or acts of intentional cheating will be allowed to participate in F1 in the future" - new president Jean Todt does not intend to let that situation stand.

Briatore's ban stands for now while the FIA decides whether to appeal against the decision. If the FIA does appeal, it might win, and it might not. If it does not, Briatore and Symonds are free to do as they wish - although, having been found guilty of cheating, it would probably be wise to leave it some time before they go back to F1.

But even if it does appeal and wins, Todt clearly needs to change its administration of the sport to ensure the FIA can pass judgement on all participants. Given that Briatore won his case on the grounds that, as he was not an FIA licence holder, the FIA had no right to punish him, the most obvious way would be to extend the list of those who require licences. 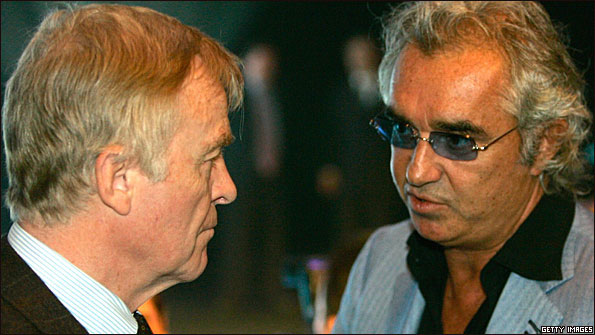 Todt's victory in last October's FIA elections was greeted with wariness by F1 teams who remember his divisive presence as Ferrari team boss for 15 years. But it has to be said that judging by his record so far the Frenchman's stewardship of the FIA has got off to a good start.

He has been careful to praise the efforts of his predecessor Max Mosley, who presided over the Singapore race-fixing case, but all Todt's actions have been to start a subtle but perceptible shift away from them.

Among them is a review of disciplinary procedures, which includes the setting up of a new independent body to deal with such issues (Mosley would contend that his World Council was independent; the problem was, few in F1 believed him, and credibility is all-important in these cases).

Certainly the French court decision was an indictment to some degree of Mosley's methods, with his role at the September World Council meeting that banned Briatore likened to being prosecutor, judge and jury all rolled into one.

Members of the F1 community have been expressing similar misgivings about Mosley's running of the World Council for years, so it might seem surprising that it has taken so long for someone who has fallen foul of it to challenge it in this manner.

The reason is that, in the Mosley years, F1 operated under a climate of fear - the general belief was that it was better to swallow whatever punishment Mosley came up with because by challenging it you risked it getting even worse.

This was certainly what was behind McLaren's decision not to challenge the absurdly large $100m fine levied on them for their role in 2007's 'Spy-gate' saga, and which many in F1 believed was rooted in personal vindictiveness on the part of Mosley towards McLaren boss Ron Dennis. Had they fought it, they worried Mosley would ban them from the sport, which would effectively have shut the team down.

It's true that Ferrari took the FIA to the French civil courts last summer in the course of the row over budget caps that ultimately led to Mosley's demise, but Ferrari are too powerful to have the same fears as others in the sport.

The same applies to some degree to Briatore, but clearly he was also encouraged in his fight by the fact that with Mosley gone - even if he remains on the FIA Senate - the risks of repercussions were greatly reduced; and, more importantly, having been banned for life, he had nothing to lose.

In some ways, though, the court case has distracted attention from what could be said to be the central issue here - which is that despite the high-profile investigation into the Singapore 2008 race-fixing allegations, there is still no definitive answer as to what exactly went on in one of the most shameful incidents in F1 history.

The FIA - and Renault's own internal investigation - found that Briatore and Symonds had conspired with Nelson Piquet Jr to cause a deliberate crash to aid team-mate Fernando Alonso's bid for victory. But only those three people really know what happened, and they can't agree on it.

Piquet says he was asked to crash by Briatore and Symonds. Symonds says it was Piquet's idea, but that he went along with it, a decision which he says is "to my eternal regret". Briatore, meanwhile, continues to protest his innocence, even if he does so in the strangled, practically opaque, language for which he is so famous.

So we have the three parties involved all saying different things. Faced with this contradiction, the FIA and Renault were able to come to their conclusions about the guilt for the conspiracy only thanks to the evidence of a fourth party, a whistleblower within the Renault F1 team.

The identity of this person has never been made public, but most people in F1 believe they know who it is. Whatever, this person - deemed "Witness X" in the World Council hearing - gave evidence that he had been told of the plan.

He said that Piquet had approached Symonds after qualifying in Singapore and suggested the idea of a deliberate crash; that Symonds mentioned it to Briatore; and that no-one else was involved.

This was the only independent evidence available to the FIA. The conclusion on the basis of it was to ban Briatore for life; Symonds for five years; and to let Piquet off on the grounds that he had been granted immunity for coming forward in the first place.

And here's the rub - in all the acres of coverage given to this event, remarkably little has focused on the role of Piquet.

The Brazilian told the FIA that he feared for his seat at Renault, and he thought that by going through with the crash it would persuade Briatore to keep him on for the 2009 season.

Clearly, whatever the circumstances, he should never have done what he did - I still find it difficult to comprehend that a man whose job it was to drive grand prix cars chose to crash one deliberately. He says now that he regrets his actions. Yet he was perfectly happy to keep quiet about them for 10 months - until he was sacked by Briatore following the Hungarian Grand Prix in July 2009.

In its justification for not punishing Piquet, the FIA said that it wanted whistleblowers to come forward without fear of prosecution. But it seems to me that this is something different from that.

This is not an innocent bystander coming forward to reveal a sinister plot, but fearing for the repercussions for himself. This is the man who committed the offence in the first place being let off in favour of punishing the two people who, depending on who you believe, either asked him to do it, or went along with his idea. Or, by Briatore's account, knew nothing about it at all.

As Renault's new number one driver, Robert Kubica, said at the time: "Normally if you go to the police and you say you killed someone but you know someone else who killed three people, you will still go to jail."

As he is pondering his approach to any similar events in the future, Todt may want to have a think about that.