Michael Schumacher's possible return to action with Mercedes in 2010 has been the hot topic in Formula 1 circles since BBC Sport pundit Eddie Jordan first put meat on the bones of the vague rumours last month - and it is now looking increasingly likely to happen.

Bosses at the Mercedes team have all scrupulously avoided dampening down the speculation in the last couple of weeks, with the latest remarks coming from chief executive Nick Fry, who said a comeback by the seven-time champion would be "very interesting".

And this morning, the German tabloid Bild reported that Mercedes had offered Schumacher a salary of seven million euros (£6.3m).

On top of that, my information is increasingly that Schumacher's return as Nico Rosberg's team-mate is looking like a done deal.

Jordan says he thinks it will now definitely happen - and he believes it is only subject to a medical examination by leading F1 physician Dr Johannes Piel on the neck injury that stopped him returning as a replacement for Felipe Massa last summer.

Other sources are pointing in the same direction.

One figure who until recently had a senior role at Ferrari, who would have to release Schumacher from his consultancy contract, is saying it is definitely going to happen.

And I received cast-iron information from a reliable source this morning about the plans of those potentially affected by Schumacher's decision that, shall we say, points very strongly to him driving for Mercedes in 2010. (If that sounds vague, I'm sorry, but I was told in confidence and cannot reveal any more).

Armed with this mounting evidence, I phoned Schumacher's media spokeswoman Sabine Kehm to ask her what was going on with her client.

She is normally very forthcoming - it was Kehm who gave me the information with which BBC Sport broke the story back in July that Schumacher would consider a return as a stand-in for Massa.

At the time of Jordan's remarks she said a return was "highly unlikely", but that she "would never say never". But this time, although as friendly as ever, she was unusually reticent.

I realise that none of this is definitive evidence that Schumacher will be back in F1 in 2010. But I have to admit that, after being initially sceptical about it, I'm now increasingly convinced that it could well come true. 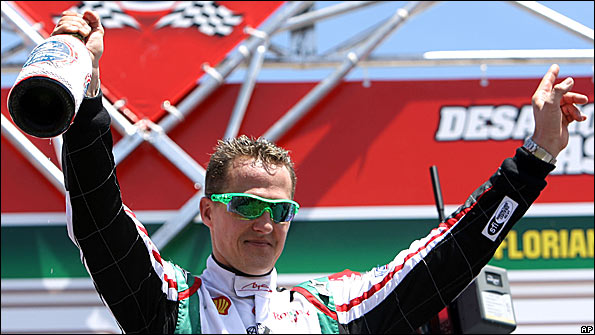 Schumacher continues to go karting when he can - is it in preparation for an F1 return?

If Schumacher does come back, it raises a whole load of interesting questions. The first of those is probably why, when he will be 41 in January and has absolutely nothing to prove, would he want to?

Until Schumacher himself speaks, there is no definitive answer to that. But it is pretty obvious that the competition bug still bites him hard - he drives karts as often as he can, and won Massa's karting challenge in Brazil last month.

It would also be a neat book-end to his F1 career - Mercedes, for whom he was driving in sportscars at the time, paid for him to make his F1 debut with Jordan in 1991, but he has never driven in a grand prix for them. He would also be continuing his relationship with Mercedes GP boss Ross Brawn, who has masterminded all his seven titles, two at Benetton and five at Ferrari.

There is, though, also the issue of whether his neck has fully healed - but Kehm has already said that there is no reason to believe it won't have done by the end of the year.

Schumacher, Kehm and Brawn have all said that he is not interested in a new career. But that is not what this would be about, should it happen. At 41, any comeback by Schumacher is necessarily going to be short, but then this one only has to be.

Mercedes have already signed Rosberg for 2010 but, promising though the German is, he is not considered to be of the same calibre as Lewis Hamilton and Fernando Alonso, who will be leading the challenges of McLaren and Ferrari, nor of Jenson Button, Hamilton's new team-mate, or Sebastian Vettel of Red Bull.

And although Nick Heidfeld, widely believed to be Mercedes's second choice as Rosberg's team-mate, is a consistent, reliable performer, he isn't either.

Vettel is Mercedes's main target - but they cannot have him for 2010 as he has a contract with Red Bull. That deal also lasts through 2011, but it is believed Mercedes will make strenuous efforts to prise the 22-year-old out of that deal during next year with a view to having him lead their team in 2011.

With that in mind, Mercedes need a stop-gap for 2010. And while Heidfeld would certainly be a decent one of those, he is not going to have the same impact, on and off the track, as Schumacher. After all, given the choice, who would you go for?