Toyota's decision to quit Formula 1 is the latest in a series of high-profile exits by the world's biggest car companies - but it will almost certainly be the last, at least for a while.

Toyota follows Honda and BMW as the third manufacturer to pull out of the sport in the space of 11 months. But the three left in - Mercedes, Ferrari and Renault - all seem to be secure for the foreseeable future.

Certainly, no-one has any doubts about Mercedes and Ferrari.

Mercedes, which owns 40% of the McLaren team, is in the process of expanding and strengthening its commitment. It is currently deciding whether to take a controlling interest in the championship-winning Brawn team - perhaps as much as 75%, although that would probably mean Mercedes divesting itself of its shareholding in McLaren.

Ferrari, who are owned by Fiat, have been in grand prix racing since the 1920s - and are the only team to have raced in F1 every year since the inception of the world championship in 1950. And, historically, the car company was born out of the race team, not the other way around.

As far as Renault goes, there have been doubts this year about its commitment. During F1's summer of political discontent, the French company were mentioned by Max Mosley, the former president of F1's governing body the FIA, as one of three manufacturers likely to pull out - the other two being Toyota and BMW.

But in the wake of the Singapore race-fixing scandal, Renault's bosses confirmed to the FIA that they would remain in F1 in 2010.

And further indication of its commitment came in the signing last month of the highly rated Polish driver Robert Kubica. They are expected to announce imminently - perhaps as early as Thursday - that the German former Toyota driver Timo Glock will be in the other car.

Toyota, by contrast, might have been making noises about wanting Kimi Raikkonen or Kubica for 2010, but they were conspicuous by their lack of signings.

And whereas Renault, Ferrari and McLaren all have motorsport in their corporate blood - in that they absolutely understand what is required to succeed - Toyota never really seemed to have worked it out.

In eight years of F1, Toyota lurched from one mediocre season to the next. The closest they came to appearing to be on the right track was in 2005 and into 2006, after they signed the top designer Mike Gascoyne to lead their technical department.

But they sacked him in 2006 after one race - in which then Toyota driver Ralf Schumacher finished on the podium - because he questioned the management processes that he, and many others, felt were holding Toyota back. 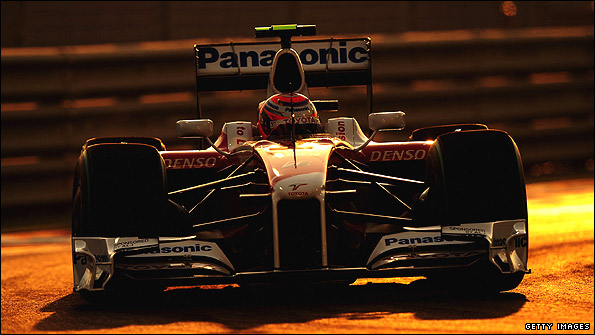 The sun has set on Toyota's involvement in F1

The company is wedded to a management philosophy called the "Toyota Way". But while this has played a key role in making them the biggest car company in the world, it has proved less well suited to the quick decision-making required in such a fast-moving sport.

And after spending in the region of £1.6bn (more than half its last-posted annual loss) to win nothing in F1, the board's decision to cut its losses (literally) in the context of its worst-ever financial figures, and fears about the very survival of the company, is to be expected.

And following tyre company Bridgestone's decision to stop at the end of 2010, F1 will be without a Japanese corporate involvement for the first time since 1983, when Honda returned to the sport.

On top of the global financial crisis, this, according to my sources in Japan, is also a result of key executives in those companies not liking motorsport - and preferring to chase the bottom line. So it is unlikely this will change until the management of those companies changes.

This latest development also sheds a slightly different light on the political upheavals of the summer.

When Mosley was trying to force through his plan for a £40m budget cap in F1, Toyota were one of the members of the F1 Teams' Association (Fota) most vociferously opposed.

At the time, Mosley's contention that three manufacturers were on the verge of pulling out looked like a ploy and there was the fear that it would turn into a self-fulfilling prophecy.

It might still have been that. Yes, there are global financial reasons for Toyota's withdrawal - as there were with Honda and BMW - but how are we to know whether what the manufacturers viewed as Mosley's arbitrary and authoritarian governing of the sport did not also affect their decision?

Mosley lost the war with Fota - he was forced out, and failed to push through the budget cap. But he has been proved right up to a point.

F1 did need new teams to protect itself against the withdrawal of the manufacturers, and his attempts to drive down costs have definitely had an effect on getting them in.

As it stands, four new teams are already entered for 2010 and Toyota's withdrawal paves the way for a fifth. The Sauber team, which BMW bought and used as its F1 vehicle, was last month named as first reserve should any other teams pull out.

How many of these new teams actually make it on to the grid next year remains an open question - there are doubts about at least two of them.

But however many make it, there has definitely been a shift in the balance of power in F1.

When Fota forced Mosley to back down in the summer, it appeared to have emerged as one of the most influential forces in F1, with the FIA marginalised.

But now there are only three manufacturers, and more than double that number of private entries, that surely means the power of the new FIA president has been strengthened.

Fota has stayed united in the face of all the FIA's attempts to divide them so far, but the new teams weaken that unity.

Todt has not yet revealed what his plans are - although he has mentioned cost-cutting. But whatever they are the latest development will probably make it easier to get them through, even if the big beasts of F1 do not like them.

BLOG UPDATE, 1700: The BBC has learnt on Wednesday that Renault is discussing at an emergency board meeting on Wednesday whether to pull out of Formula 1.

The board is discussing whether to quit the sport, stay on as an engine supplier, sell the team or pull out altogether.

A decision is not expected to be announced on Wednesday or Thursday, but could come any time after that.

Obviously this could change some of the views I expressed at the top of this article on Renault, but the thrust of much of what I have said remains valid no matter what Renault decides.