Our classic Formula 1 series is in a bit of a purple patch at the moment and it continues with the latest selection looking ahead to the Brazilian Grand Prix.

Like Belgium, Italy and Japan before it, Brazil has been a long-time fixture on the Formula 1 calendar, so there has been plenty of time for it to build up a catalogue of great events.

It helps, too, that the Interlagos track in Sao Paulo lends itself to overtaking, with its long pit straight and demanding corners.

Interlagos was the host of the first Brazilian Grand Prix in 1972, but two of our five choices are actually from the race's time at Rio de Janeiro's Jacarepagua track, which hosted the event in 1978 and then from 1981 to 1989, after Interlagos in its original five-mile form was deemed too dangerous.

The first of our selections, 1982, is one of my personal favourites. As a 12-year-old, I was deep into my childhood obsession with Formula 1 and, for a wide-eyed schoolboy, this race was enticing for being in an exotic location I didn't know much about as well as exciting in itself.

It featured a starring role from my childhood hero Gilles Villeneuve, who led the first half of the race after starting second on the grid in his Ferrari, putting in one of his trademark never-give-up drives as he battled with rapidly deteriorating tyres.

The great French-Canadian eventually lost his battle with his car's diminishing grip, and spun off at around half-distance, leaving the lead to be disputed between Brabham's Nelson Piquet and Williams's Keke Rosberg.

The 1982 grand prix cars were notorious for the pain they put their drivers through, with their rock-hard suspension and high levels of grip thanks to underbody 'ground effect'.

All the drivers were suffering in the sticky heat of Rio. Piquet's team-mate Riccardo Patrese spun out with exhaustion after 34 of the 63 laps. And just four months after he won his first world title in Las Vegas despite crossing the line in a semi-comatose state, Piquet was in little better shape in his home race.

The Brazilian managed to hold off Rosberg, but the podium ceremony was too much for him. He collapsed and had to be held upright by Rosberg and third-placed finisher Alain Prost of Renault.

The drama was not over, though. F1 was going through one of its most poisonous political battles and, after the race, Piquet and Rosberg's cars were disqualified for being underweight, making Prost the winner. The rules allowed for teams to fill up with 'essential fluids' after the end of the race, and the teams using Cosworth engines, which were out-powered by the turbos of Ferrari and Renault, were using this loophole to run their cars underweight in races.

Adding to the interest in that race, it featured arguably the best F1 grid in the history of the sport, in terms of the depths of talent on display - with Villeneuve, Prost, Piquet, Rosberg and Patrese joined by Carlos Reutemann, Niki Lauda, John Watson, Didier Pironi, Michele Alboreto, Nigel Mansell, Rene Arnoux, Elio de Angelis and Jacques Laffite. That's more than half the grid filled by multiple grand prix winners, with a fair old smattering of greats as well. How often has that happened?

Our next selection is 1989, also in Rio, and one of Mansell's most remarkable victories. 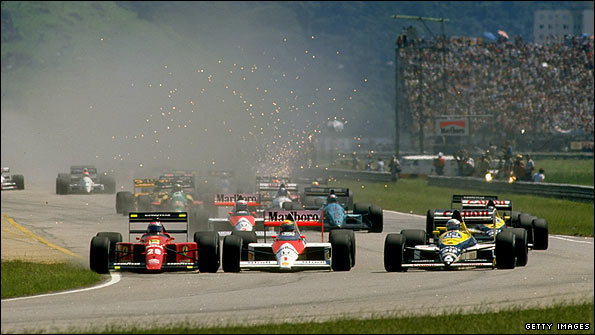 Berger (left) and Senna collided at the start of the 1989 Brazilian GP, which Nigel Mansell went on to win

Ferrari designer John Barnard pioneered the semi-automatic gearbox with this car, the 640. Within a couple of years, the system, operated through paddles on the back of the steering wheel, was to become de rigueur in F1. But Ferrari had serious development pains with it.

The car had failed to complete more than a handful of laps at a time in pre-season testing. And so convinced was Mansell that it would not last the distance in the heat that he booked an early flight home - which he promptly missed when the Ferrari not only lasted the race, but finished it first as well.

By 1993, the Brazilian Grand Prix was back at a truncated Interlagos. It was only the second race of the season, but already it was clear that Prost, now driving for Williams, was a lock for his fourth world title. The Frenchman took pole position in Brazil, with team-mate Damon Hill second and local hero Ayrton Senna only third.

But the race was far from the expected Williams demonstration run. There was a huge accident at the first corner, which took out Ferrari's Gerhard Berger and the McLaren of Michael Andretti, who was at the start of what turned out to be an ill-starred attempt to break into F1.

Prost did indeed dominate the early laps, but the track was then hit by a typical Sao Paulo downpour and the Frenchman spun off at the first corner, hitting the Minardi of Christian Fittipaldi, who had just gone off in the same place.

That brought out the safety car, which negated the big lead Hill had built up over Senna, who passed the Englishman shortly after the re-start and sent the crowd wild with a win that put him into the lead of the world championship.

The following year's race was equally eventful. It is remembered for two main things.

Firstly, Michael Schumacher laid down a marker for Benetton's domination of the season by outpacing Senna, who suffered the ignominy of spinning in the closing laps trying to keep pace

Secondly, there was a massive accident involving Martin Brundle, Olivier Panis, Jos Verstappen and Eddie Irvine, which resulted in Verstappen's Benetton somersaulting out of the race, his tyre leaving a black rubber mark on Brundle's helmet as he flew over the Englishman's McLaren.

Irvine, who had already made a name for himself as something of a bad boy after getting himself punched by Senna at his debut race in Japan the year before, was banned for three races for causing the crash.

Our final choice is last year's title-deciding race, which surely needs no introduction.

Lewis Hamilton, needing only to finish fifth to clinch the title even if his rival, Felipe Massa of Ferrari won, made heavy weather of his task.

In arguably the most exciting championship climax in F1 history, when Massa crossed the line to win the race, Hamilton was only in sixth place, and in the Ferrari pit they celebrated, thinking their man was the world champion.

But out on the track Hamilton was still striving, and as he exited the last real corner of the track, with only the long blast up the hill to the finish line to go, fifth placed man Timo Glock of Toyota was struggling to find grip on the wet track with his dry-weather tyres.

Hamilton accelerated past him, and into the fifth place he needed to clinch the title.

As ever, we are asking you to give us your views on which race we should feature in the run-up to the race next week. We will pick one race to highlight - a decision that will be informed by your responses to this blog, but not based solely on them.

If that race is from the era when the BBC had the rights to F1 - which in this case means all the choices apart from 2008 - then we will show the full 'Grand Prix' highlights programme that was broadcast at the time.

We'd also welcome your views on the selection itself - by all means point out other races you think we should have included. We can always include these next year.