Briatore bows out in unsavoury style

Flavio Briatore's departure from his position as the boss of the Renault team in the wake of the Singapore race-fixing scandal robs Formula 1 of one of its most flamboyant and controversial characters.

The 59-year-old Italian, who has cultivated an image as a jet-setting playboy businessman, left his position as team principal after Renault decided not to contest charges that they had asked their driver Nelson Piquet Jr to deliberately crash in last year's Singapore Grand Prix to aid team-mate Fernando Alonso's chances of winning the race.

The allegation has rocked F1 to the core, the latest damaging episode for a sport that has recently suffered a number of cases that have brought its integrity into question.

There was the 'spy scandal' of 2007, when McLaren were found to illegally have possession of confidential technical information about the car of rivals Ferrari. McLaren were fined $100m (then £49m) and thrown out of the constructors' championship for that.

Shortly afterwards, Renault themselves escaped punishment after being found guilty of a similar charge.

Since then there has been 'lie-gate', when Lewis Hamilton, the world champion, was found to have misled stewards over his actions in this year's Australian Grand Prix, and numerous rows over rules and politics.

Earlier this year, F1 was in danger of being torn apart when a group of eight teams threatened to break away and set up a rival championship.

This one trumps the lot, though. 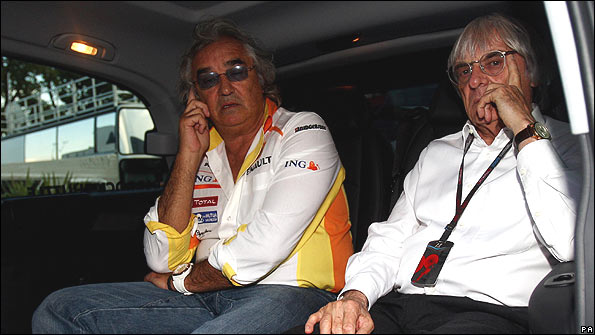 Some people inside F1 have attempted to play it down, suggesting that teams are always looking for the 'unfair advantage' in their attempt to win, and that it should just be accepted as part of the sport.

But F1 has long been notorious for its skewed sense of morality, and it appears that may be what has led to this latest scandal. For that is exactly what it is.

The attempt to gain an unfair advantage is only one aspect of what is so wrong about what appears to have happened in Singapore last September.

In essence, what we are talking about here - if they are found guilty at Monday's hearing of the FIA's world motorsport council - is a team that was prepared to put at risk their driver's safety - and that of his competitors, marshals and the spectators at the race - in an attempt to engineer a better result for another driver.

It smacks of desperation, which is odd because Alonso, at least, was competitive in Singapore that weekend. Renault had been having a dreadful year, but changes to their car had made it a front-runner by that late stage of the season, and he was down in 15th on the grid only because of a mechanical problem in qualifying. He went on to win the following race in Japan with a quite brilliant drive.

Whatever sparked the decision for Piquet to crash on purpose in order to engineer a safety car period that would benefit Alonso - and who knows whether the truth will ever come out - two of F1's most prominent and brilliant figures have lost their jobs over it. Engineer and strategist Pat Symonds has also been forced out of Renault along with Briatore.

As it happens, Briatore's downfall may not be entirely unconnected with the political battles that have scarred much of this season. Certainly most people within F1 believe the one has come out of the other.

The Formula 1 Teams' Association (Fota) ultimately won its battle with Max Mosley, president of governing body the FIA, over the future direction of F1. But Mosley, forced to agree that he would not run again for president in October's elections in order to get Fota back on board, has never been one to take defeat lightly.

There are plenty of people in F1 who believe he has taken his opportunity to exact revenge for his defeat. After all, Briatore was one of the hawks in that battle - to the point that Mosley was moved to describe him as a "loony".

Briatore's business career first took off when he established Benetton in North America in the 1980s - a move which made him a very rich man. His first involvement in F1 came in 1988, when he was employed to run the commercial side of the company's racing team, quickly being promoted to team boss.

It was there that he first met Symonds.

Along with the brilliant technical director Ross Brawn, the designer Rory Byrne and the hard-nosed manager Tom Walkinshaw, Briatore set about turning the team into a major contender for wins and championships.

Briatore's genius as a team boss was his ability to realise his limitations - he understood nothing of the technical or strategic side of F1 and didn't want to - and instead focus on the commercial side of the sport.

In that sense, his presence in the sport for the last 20 years has been a valuable one. He constantly reminded his fellow team owners that F1's success - and their bank accounts - depended on the fans, not on obscure engineering excellence.

"Every meeting I go to," he would say, "people are talking about pistons and suspension. Nobody goes to a race to see that kind of thing. People come to see [Michael] Schumacher and [Ayrton] Senna racing each other."

Ironically, Mosley himself would use similar sentiments when railing against what he perceived as the short-sightedness of the teams this year.

In other ways, though, many will take a more equivocal view of Briatore's involvement in F1.

His ruthlessness was in evidence when he stole Schumacher from under Eddie Jordan's nose in 1991 and parachuted the German into one of Benetton's cars.

And the mystery surrounding his origins was heightened when a bomb went off outside his London home in 1993, something which has never been satisfactorily explained.

With Schumacher at the wheel, Benetton finally achieved their first world title in 1994, but it was a triumph overshadowed by a year of quite extraordinary controversy.

Benetton were accused of running illegal traction control, but got away with it. The FIA found the device in the Benetton cars but could not prove it had been used in races.

There were also rows over the team's official fuel rig, which had been tampered with - Walkinshaw lost his job as a result - while Schumacher was excluded from a total of four races for various transgressions by either him or the team.

After winning another world title in 1995, Schumacher left, taking Brawn and Byrne with him to Ferrari, after which Benetton entered a slow cycle of decline. Briatore was eventually replaced as boss by David Richards.

By this time, Briatore's keen eye for F1's commercial value, allied to his maverick approach, had led to a close friendship with the sport's tsar, Bernie Ecclestone. They both have a stake in Queen's Park Rangers, a club in the English Football League.

Briatore took something of a back seat for a while, running Renault's customer engine supply business for a couple of years. But a string of high-profile liaisons with supermodels, among them Naomi Campbell and Heidi Klum, kept him in the public eye and enhanced his glamorous image. He has also established his own 'Billionaire' clothing brand and set up a nightclub in Sardinia, a restaurant in London, a beach club in Tuscany and a holiday resort in Kenya. 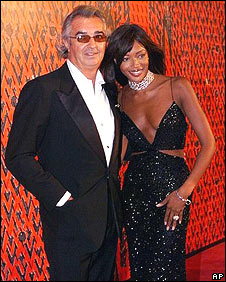 Then, when Renault bought the Benetton team in 2000, the French automotive giant re-installed him as boss and he began turning the team around again.

Just as he had done the first time, he built it around an outstanding young driver, Alonso, who had impressed Briatore with his performances in the Formula 3000 feeder series.

The Spaniard became the youngest race-winner in F1 history in 2003 - a status he lost to the German Sebastian Vettel last year - and, by 2005, was in a position to challenge for the world title. Alonso and Renault delivered in style, clinching it with two races still to go.

They followed that up with an even more impressive victory in 2006, keeping their nerve and beating Schumacher and Ferrari in a straight fight.

Alonso then left for an ill-fated year at McLaren before returning after falling out with McLaren chief Ron Dennis. But not even Alonso's return could arrest Renault's decline.

All year there has been speculation - fuelled by Mosley, who is uncomfortable about the power wielded by the manufacturers - that Renault would quit F1 at the end of this season as a result of their lack of success and declining road-car sales.

Briatore has always shrugged those allegations off, but this latest development can surely only increase the chances of Renault not being on the grid next season. On the other hand, Renault's decision to jettison Briatore and Symonds could be seen as a signal that they wish to carry on.

By the end of the year, it may not be just Briatore and Symonds who have left F1 in the wake of this latest unsavoury turn of events.