Fernando Alonso's move to Ferrari, which was finally announced on Wednesday, is the most exciting shift in the Formula 1 fabric for years.

Assuming F1's traditional giants can both get back to the front, with Alonso at Ferrari going up against Lewis Hamilton at McLaren it sets the best two drivers in the world against each other in the two most famous teams.

Think of James Hunt against Niki Lauda, Alain Prost versus Ayrton Senna, Michael Schumacher taking on Mika Hakkinen. This is the historical lineage in which Alonso and Hamilton are taking their places, and they have all the qualities required to live up to those expectations.

Alonso's year as Hamilton's team-mate at McLaren in 2007 may have been tempestuous in the extreme, but there is not the personal animosity between the two that there was for a long time between Senna and Prost.

Nor, though, are they exactly the partners in playboy excess that were Hunt and Lauda. Instead, their relationship is based on a deep respect for each other's abilities and a similarly powerful will to win. 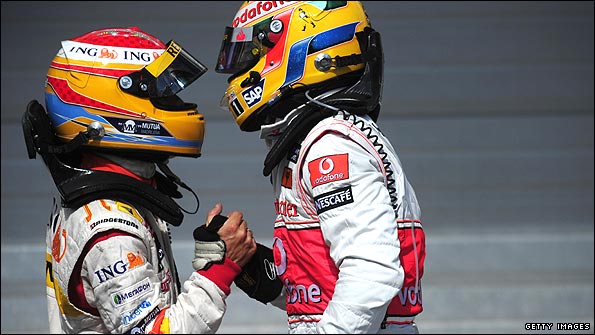 Alonso and Hamilton have deep respect for each other's abilities

When they were racing, many people believed that, on a single lap, Hakkinen was actually slightly faster than Schumacher. Equally, few had any doubts that, overall, Schumacher was the more complete driver.

It is not stretching the point to see Alonso in the Schumacher role and Hamilton as Hakkinen - and that's not just because of the cars they will be driving in 2010.

Alonso and Hamilton staged a fascinating battle in 2007. Sometimes Hamilton had the edge on Alonso, sometimes it was the other way around. And they finished the season tied on points, with Hamilton edging second place in the championship behind Ferrari's Kimi Raikkonen on results count-back.

On the evidence of that one season, it is incredibly difficult to judge who is the better driver.

There was rarely more than a hair's breadth between them on pace. But, on balance, in the races where it was possible to make a direct comparison, Hamilton was faster than Alonso slightly more often than it was the other way around.

For a guy in his first season going toe-to-toe with a double world champion, that is incredibly impressive. But weighing against that, Alonso was never comfortable at McLaren.

By mid-season, the relationship between driver and team was already breaking down and after the watershed of the Hungarian Grand Prix weekend - when Hamilton and Alonso tried to double-cross each other in qualifying, after which Alonso had two massive rows with then-team boss Ron Dennis and threatened to expose the team to the FIA in the now-notorious 'spy scandal' - it was clear he was on his way out.

Even so, Alonso beat Hamilton fair and square at the next two races and a significant discrepancy in speed between the two men only emerged at the final two races, when it was clear there was a real danger of Alonso beating Hamilton to the title. And Alonso was not the only person to be suspicious about that.

Many people in F1 believe Alonso, 28, is the most complete driver in the sport - and the evidence of his career so far makes it hard to dispute that. Equally, though, it is clear that Hamilton, 24, has the potential to usurp him, just as he replaced Alonso as the youngest champion in F1 history.

Certainly, the evidence of this season is that the Englishman is beginning to show signs of the wider awareness and racing intelligence that Alonso has displayed for so long.

Now, that battle is going to be staged with the drivers in different cars and teams, with the restrictions that were imposed on them by the requirements of racing for the same organisation removed. It should be a case of sit back and watch the sparks fly.

At the same time, there are a series of intriguing sub-plots to savour.

It is looking increasingly likely that Raikkonen, who has been elbowed out of Ferrari to make way for Alonso, will move back to McLaren as team-mate to Hamilton.

If that happens, it is in itself a fascinating prospect for, on his day, Raikkonen is a match for anybody. It would be a surprise if the Finn beat Hamilton over a season, but there may well be times when the Englishman cannot live with him. And how Hamilton handles that will be a major test for him.

The intra-team fight at Ferrari will also be interesting. When Raikkonen went there in 2007, he was expected to easily beat Felipe Massa, but it didn't quite work out that way. So people will be less willing to make the same assumption about Alonso.

Nevertheless, while Raikkonen regards his job as being to turn up and drive, spending as little time doing anything else as he can get away with, Alonso has more strings to his bow and I, and many others I suspect, expect him to prove too much for the Brazilian.

Finally, there is Robert Kubica's move to Renault to replace Alonso. The Pole is highly regarded in F1, and Ferrari, for one, are known to have their eye on him for the future.

Kubica was a tough rival of Hamilton in karting, and Alonso once described him as the best driver on the grid. So if Renault can regain the form that won them two world titles in 2005-6, Kubica's presence at the front would add another dimension.

There's also the prospect of watching the progress of world champion-elect Jenson Button - arguably the leader of the second string of drivers behind Hamilton, Alonso and Raikkonen - and rising star Sebastian Vettel in a major fight with F1's heavy hitters, if their Brawn and Red Bull teams can maintain the form that has made them front-runners this season.

All in all, the future of F1 looks rosy indeed. On the track, at least.