Formula 1 returns from its summer break this weekend to start a busy climax to the season. That means this blog asking for your views on the next event in our classic races series comes before the race preceding it - Sunday's European race in Valencia - rather than after it.

While attention is focused on the matters of Valencia - whether Brawn GP can get Jenson Button's season back on track, McLaren's return to form, Ferrari's decision to pick Luca Badoer as a replacement for the injured Felipe Massa, and so on - hopefully you will find some time to consider which great Belgian Grand Prix you would like to see again.

As ever, we will use your views to inform our decision of which event to highlight on the BBC Sport F1 website in the run-up to the race at Spa-Francorchamps, which is just a week after Valencia on 30 August.

Short-ish highlights clips (between five and nine minutes long) will be shown for all the races. But if the selected event dates from the years when the BBC had the rights to F1 (ie, before 1997) we will also broadcast the full Grand Prix highlights programme of the time.

Spa is almost everyone's favourite circuit - a dramatic roller-coaster ride through the verdant Ardennes mountains - and its extensive history means there have been some absolutely stonking races there.

For this selection we have focused on the last quarter of a century, even though the track's history can be traced right back to the 1920s.

Nor have we included any races from the era when Spa lost the race and it passed through the unloved Nivelles and Zolder race tracks. Perhaps next year we will try to delve a little deeper into the past, although as we have discovered at other historic events this season the archive is not what one might wish for from some of those years.

Our selection starts with 1985 with what I believe was a race uniquely rescheduled from its original May date to what has become the now-traditional early autumn date for the Belgian GP. 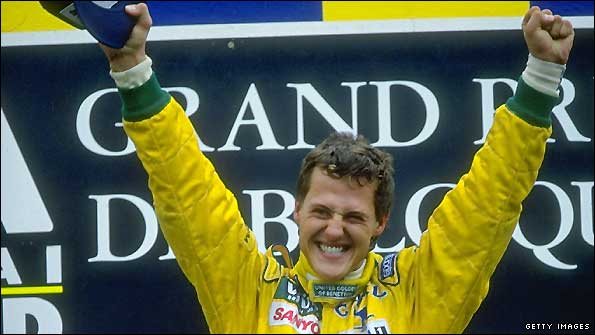 Spa was resurfaced shortly before the original date of the 1985 Belgian GP, and when the weather on the original weekend in May was unseasonably hot, the asphalt broke up badly - so badly, in fact, that it was impossible to hold a race on it.

When the teams reconvened at Spa in September, McLaren driver Alain Prost was within touching distance of the first of his four world titles. Although the Frenchman was on good form that weekend, his cautious approach - he had already missed out on three world titles in agonising circumstances - contributed to the fact that he did not win a fascinating race in the wet-dry conditions seen so often at Spa over the years. Instead, victory went to Ayrton Senna, who was then coming to the end of his first season in a top team.

Senna's had been a season marked by blistering speed - he seemed to be on pole virtually everywhere - but equally poor reliability.

That weekend in Spa, though, his Lotus-Renault held together, and in a fascinating race the Brazilian was imperious in conditions that already he was making his own.

Our next choice is 1992, another race in mixed conditions and another win for a rapidly rising star, this one going by the name of Michael Schumacher.

This was the German's first grand prix victory and it came exactly a year after he had made a spectacular F1 debut for Jordan. Now at Benetton, who had poached him from Jordan in the two weeks between the 1991 Belgian Grand Prix and the next race in Italy, Schumacher's performances through 1992 had already marked him out as a future superstar.

In another intriguing race, the turning point came shortly before the first pit stops. The field were on wets on a track that was slowly drying, and Schumacher briefly slid off the road. After a brief excursion, he rejoined right behind team-mate Martin Brundle - and Schumacher immediately noticed the Englishman's rear tyres were going off.

Realising a) that this had probably contributed to his 'moment' and b) that it was now time to come in and change to dry tyres, Schumacher did exactly that at the end of that lap. The decision won him the race.

Schumacher features heavily in our next two selections as well. In 1995, he and title rival Damon Hill qualified well down the grid after qualifying was hit by rain. As they set about making their way up through the field, Hill's Williams team-mate David Coulthard ran away with the race in the early laps and seemed certain to take a first victory, only for his car to fail at just after quarter-distance. 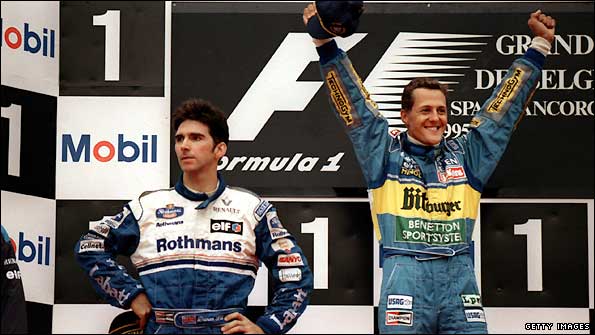 Now in contention for victory, Schumacher and Hill staged what was one of many entertaining but bad-tempered on-track battles that year. Hill was incensed by his rival's wheel-banging tactics.

Observers were more impressed by Schumacher's ability to hold off Hill through the fast chicane at Les Combes in damp conditions while the Williams driver was on the racing line using wet tyres and Schumacher on the wetter part of the track on dry-weather slicks.

Schumacher went on to record another in the series of brilliant victories that clinched him a second consecutive world title. He should also have won in 1998, our next choice, but fate conspired against him in an incident-packed race.

The drama started on the opening lap, when in the limited visibility caused by pouring rain, a mass pile-up on the hill down from the La Source hairpin involved 13 cars. The race had to be stopped so the track could be cleared.

When it was restarted an hour or so later, Schumacher, now at Ferrari and battling McLaren's Mika Hakkinen for the title, wasted no time in speeding into the lead and building a massive advantage.

Unlike in our first three selections, though, there was no let-up in conditions, and the rain was still pelting down when Schumacher came up to lap Hakkinen's team-mate David Coulthard in terrible visibility halfway through the race.

On the downhill straight to the fifth-gear 150mph Pouhon left-hander, Coulthard backed off to let Schumacher by, but caught unawares, the German's car piled into the back of the McLaren, ripping off the Ferrari's right front wheel.

It was an innocent misunderstanding, but Schumacher - perhaps transposing his own morals onto another - smelled foul and immediately jumped to the incorrect conclusion that Coulthard had done it deliberately to help the title challenge of Hakkinen, who had retired early in the race.

Schumacher had not calmed down by the time both men had dragged their terminally damaged cars back to the pits, and he marched stern-faced to the McLaren pit, where the two men had to be pulled apart, in an echo of an incident between Senna and Nigel Mansell in 1987.

The two, in a much calmer frame of mind, discussed the incident in a recent interview with the BBC.

Out on the track, Schumacher's retirement had left the Jordans of Damon Hill and Ralf Schumacher running one-two.

The team had had a terrible start to the year, but diligent work had transformed the car and it was now a contender.

Hill had driven superbly in the first half of the race to build a lead over his team-mate and get himself up into second place, but now Ralf was gaining.

Concerned that they would end up losing Jordan's first ever F1 win - and a one-two at that - with two drivers battling in terrible conditions, Hill radioed the team to say they could continue to race if they liked but that it might make more sense to tell them to back off and cruise to the finish.

Eddie Jordan needed no second invitation and issued the order - which did not go down well with either Ralf or his brother.

It meant that Jordan, in the midst of celebrating a breakthrough moment for his team, had to contend with a lecture from a still-angry Michael Schumacher on how he had unfairly stitched up his brother. 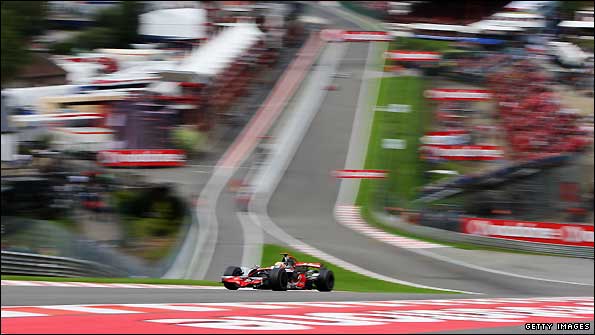 Our final selection, the 2008 race, also seems certain to go down in
F1 history for its controversial conclusion. For 41 laps, it was a boring Ferrari demonstration, with Kimi Raikkonen seemingly heading to a dominant victory. But rain with three laps to go changed everything.

Now the McLaren of Lewis Hamilton was the fastest car in the race, and the stage was set for a dramatic final couple of laps.

Hamilton won an energetic and brilliantly entertaining battle for the lead with Raikkonen, who then crashed out. But in the course of that fight, Hamilton was adjudged by the stewards to have cut the Bus Stop chicane and not sufficiently handed back his advantage.

The assessment was probably fair but the penalty was another matter - the vast majority of observers disagreed vehemently with the decision to dock Hamilton 25 seconds, demoting him to third, leaving the winner of the race as Felipe Massa, who had driven one of those anonymous races when you barely notice a driver is there.

It is, I hope you will agree, a superb selection of races. Doubtless, though, many readers will have other Belgian Grands Prix they feel should be there instead.

While debating which one of these races you'd like to see, please do tell us which others are your favourites and why, and we will look at including them in this series next season.