The 2007 Chinese Grand Prix is the event chosen to be highlighted in our classic races series this week.

There was some stiff competition, particularly from 2004 and 2006, but you just cannot look past the drama of Kimi Raikkonen's victory in 2007.

It was a race that should have been the final chapter in a golden debut year for Lewis Hamilton - but it was also the first race in which the world saw what have emerged as his major flaws.

After a masterful victory in the rain in Japan the preceding week, all Hamilton had to do was finish ahead of team-mate Fernando Alonso to become the first man to claim the drivers' title in his debut season.

And as he streaked away from the field in the opening laps, that destiny seemed assured.

As it happened, his fate was sealed to some degree by his pace on intermediate tyres on a damp track in those early laps.

As the track began to dry, Hamilton's tyres began to go off faster than those of the pursuing Ferrari of Kimi Raikkonen and Hamilton's team-mate Fernando Alonso in third place.

As Hamilton began fighting for grip, both men passed him. But even that should not have been a problem. 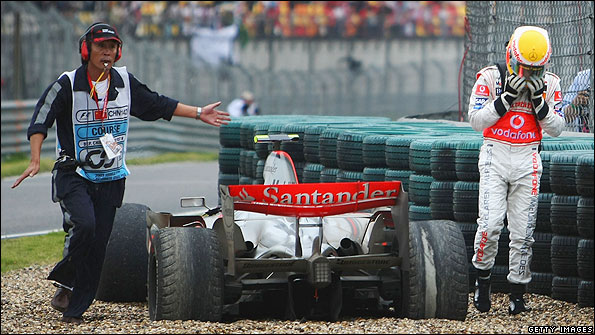 If Hamilton had finished third behind his two rivals, he would still have won the title.

But this was the year in which McLaren fell out with Alonso and the team allowed their fractured relationship with the double world champion to influence their thinking.

Instead of bringing Hamilton in to change his tyres and collecting six safe points, McLaren focused on trying to get the Englishman to beat Alonso.

They left him out too long on his deteriorating tyres, and Hamilton was too inexperienced to make the obvious call to come in to change them.

When he eventually did, his left rear was so badly worn that there was a white stripe around its circumference.

And when he tried to come into a slippery pit lane, he slid off embarrassingly at about 30mph.

It was a quite astonishing series of errors by driver and team - but it led to a fascinating race and a thrilling showdown in Brazil two weeks later, where Raikkonen emerged as champion.

As we are heading into another one of those lovely back-to-back Grands Prix weeks, it makes sense to get your thoughts on the best races in Bahrain.

It doesn't take a genius to work out which five we will be offering up for selection, considering the Kingdom has hosted five Grands Prix.

So we would like to know which one of the five races from 2004 onwards you would select as the best ever Bahrain Grand Prix?