The problem with winner takes all

When Bernie Ecclestone first proposed his idea to settle the Formula 1 drivers' title by number of wins, the immediate response was not favourable.

The sport had just delivered two sensational championship showdowns in a row, in 2007 and 2008, so why fix what was clearly not broken?

Now Ecclestone has got his way, following Tuesday's decision by governing body the FIA, but the idea does not appear to be any more satisfactory than when F1's impresario first made his idea public in November last year.

The best justification for the new system is that, had it been in place for the entire history of F1, it would have left a list of champions that is more satisfying to the purist than the actual list. 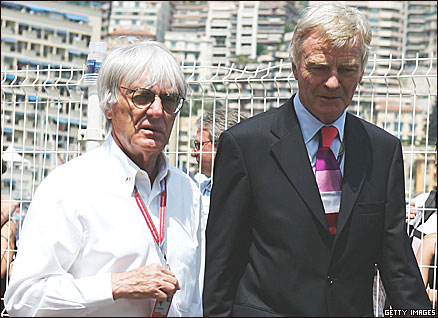 Britain's first world champion, for example, would have been Stirling Moss, not Mike Hawthorn.

It's difficult to argue against the basic rightness of that given that a) Moss won four races in 1958 to Hawthorn's one; and b) Moss has no championship to his name despite being regarded as one of the greatest racing drivers of all time - a status to which Hawthorn has no claim.

Among other changes, Alain Prost - second in the list of race winners behind Michael Schumacher - would have won five titles rather than four - which, given that the great Frenchman lost titles in agonising circumstances in 1982, 1983 and 1984 seems fair enough.

Likewise, Nigel Mansell would be a three-time champion instead of simply having his single title in 1992 - probably a fairer reflection of his ability and status.

On the other side of the coin, three-time winner Nelson Piquet would not have won any titles, which seems fair enough given the men who would have won them instead (Prost twice and Mansell).

Worryingly for the future, there is the probability under the medal system that in a season of dominance - such as that enjoyed by Michael Schumacher and Ferrari in 2004 - the championship would be decided far earlier than under the current points system, with a consequent decline in TV audiences.

Equally, the different winners dry up after 1991, when the number of points for a win changed from nine to 10 - which suggests that tweak did its job.

The only time a different driver would have won the title since then was last year - when, as every media report has pointed out, Lewis Hamilton would have lost out to Felipe Massa.

And that's where the problems begin with the new system - as well as the other changes made by the FIA World Council on Tuesday.

Hamilton would have lost out because Massa won six races to his five - but those tallies would have been reversed had it not been for the controversial decision to demote Hamilton to third in the Belgian Grand Prix.

Few people in F1 have absolute faith in the decisions made by the FIA and its stewards - and the idea of extending the areas vulnerable to them will fill many with disquiet.

Within F1, though, the new points system is being seen as a smokescreen deflecting attention from something far more controversial - the decision to implement a split-level championship in 2010.

There will be an optional budget cap of £30m - and teams operating within it will have more technical freedom to develop their cars and engines. Those that choose to spend what they like will be forced to operate within the current more restrictive rules.

Would a poorer, smaller team with a more powerful engine and freer play with aerodynamics produce a faster car than a big-budget manufacturer operating within constraints but with a better driver?

It's an intriguing question - but there will not be an answer, because FIA president Max Mosley says his organisation "will balance the median performances by adjusting the cost-capped cars should this prove necessary".

The idea of the FIA fiddling about with the performance of all the cars so the championship remains competitive will fill the teams with horror.

Through bitter experience - and whether they are right or wrong, this writer is not in a position to say - the teams do not trust the FIA to do this impartially.

What makes it worse are the factors that lie behind these decisions.

F1 has so far emerged relatively unscathed from the global economic crisis - but fears that one or more of the major car manufacturers will pull out of the sport this year remain, and I'm told by someone who knows both men well that Mosley and Ecclestone are "paranoid" there will not be enough cars on the grid in 2010.

Mosley is undoubtedly right to worry about the impact of the global meltdown on F1 - the commercial departments of the various teams are finding it extremely difficult to tie up new deals as they stare at the looming end of current sponsorship contracts - and his £30m proposal means that teams could compete solely on the prize money and television income provided by Ecclestone's companies.

But that does not necessarily make Mosley's plan the right one.

For a start, there are significant doubts about the FIA's ability to police a budget cap.

Mosley insists his "forensic accountants" can divine how much money a team is spending. But one insider told BBC Sport on Wednesday: "We don't publish our accounts until a year later - and even our own accounts department can't tell me how much we spend."

And then there's the lack of transparency inherent in the policing of the "equivalency" of the two types of cars.

It would have been far better to do what was done in 1987 and 1988, and create a temporary two-tier championship while - in that case - the big teams weaned themselves off turbo engines, but with a clear set of rules for each and a clear end in sight to the disparity.

It also has to be remembered that this is merely the latest salvo in the ongoing struggle for control of F1 between Mosley and Ecclestone on the one side, and the teams' organisation Fota on the other.

The visions of the two sides are completely separate.

Mosley and Ecclestone have made little secret that they want absolute control over a low-tech, low-budget category in which essentially similar cars are differentiated more or less only by different colour schemes.

The teams - all of them - want much more freedom as well as a greater share of Ecclestone's revenues.

The decisions announced yesterday are merely the latest salvo in an increasingly bloody war.

As one insider put it: "I think Max will win in the end - cutting costs is what he has to do. But there will be a watering down because there always is. That's how he works. He goes in ruthlessly, and then backtracks and backtracks."

The battle now is over how far the teams are able to push him back.