Mike Tindall's international career appears to be over following his sudden removal from England's elite player squad. He will not be taking part in the forthcoming Six Nations Championship, which begins in February, nor the tour to South Africa later in the year.

Perhaps the 33-year-old centre would not have been selected anyway. Still, it is a sorry way for a World Cup winner - seemingly - to bow out of international rugby.

Tindall has only himself to blame. A few drinks would have proved harmless but his infamous evening out in Queenstown during the first few days of the Rugby World Cup in New Zealand involved rather more than that.

The player's subsequent confusion in explaining his whereabouts did not help his cause, while England manager Martin Johnson was made to look foolish as he faced the media in the aftermath.

Tindall's apparent lack of contrition and his unwillingness to apologise did him no favours either. It is surprising that an intelligent man, so recently married into the Royal Family, should have so little awareness of the newsworthiness of his actions.

He was a senior figure, an experienced player, a captain. Call it naïvety, call it misguidedness, call it what you like - it landed the husband of Zara Phillips in big trouble.

There will be those who consider Tindall's £25,000 fine and exclusion from the England set-up heavy-handed. Some will argue the player has been made a scapegoat by the Rugby Football Union, desperate to make an authoritative statement after a poor World Cup and months of disarray in the boardroom. 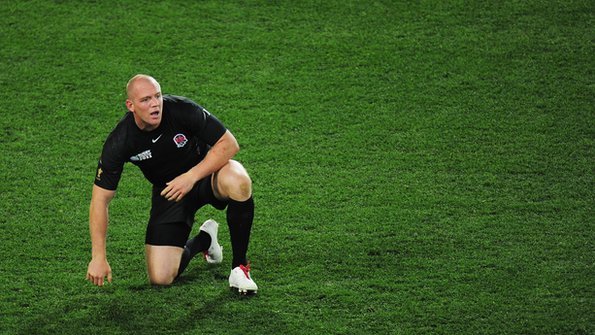 Despite becoming England's most capped centre, Tindall has been cast aside. Photo: Getty

Rob Andrew, the RFU's head of elite rugby, and Karena Vleck, the head of the RFU's legal department, have investigated each indiscretion committed by the England players on duty in New Zealand. They have interviewed the players "at length". Their ruling on Tindall is unprecedented. It is also far too late. The RFU could have avoided this situation if Johnson and his management team had disciplined Tindall on the spot.

They had several options available to them, the most extreme of which was to send the player home. They could have issued a fine or they could have suspended him for a number of matches. They chose to do nothing at all.

The circumstances were different but winger James O'Connor found himself in trouble with Australian rugby authorities a few months ago after being guilty of oversleeping. He missed his country's World Cup squad announcement and an important photo shoot. His punishment?

He was dropped immediately by Australia head coach Robbie Deans and missed the Tri-Nations decider against New Zealand. "He's less likely to take that jersey for granted in the future," said Deans at the time.

It is hard to argue that Tindall's escapades contributed directly to England's disappointing World Cup campaign. Collectively, England were off the pace and lacking in imagination. When they realised the need to fire a few shots of their own, France had already booked their place in the semi-final.

Nevertheless, the Tindall incident that night in Queenstown seemed to set the tone for an ill-fated trip. For better or worse, the perception at large was that England had adopted the wrong attitude. It all went downhill from there.

Tindall has been a terrific player for England. He has won 75 caps for his country and, in his prime, was among the best centres in the world, possessing both pace and power. As his pace has waned, he has relied more on the power and his ferocious defensive qualities.

We should not forget that he was a key figure in England's World Cup-winning team of 2003.

Tindall will continue to play for Gloucester and has been named in the starting XV for their opening Heineken Cup match against Toulouse on Sunday. He will no doubt have more successful days on the rugby pitch but it is hard to shake the feeling of disappointment when such a talented, committed and proud Englishman departs the international stage in this manner.

I'm Alastair Eykyn and I am a rugby commentator for BBC Radio and TV. My job also involves having my nose to the ground for all the interesting rugby stories. You can follow me on Twitter @5LiveRugby.

Here are some tips on taking part and our house rules

You can stay up to date with Alastair Eykyn's blog via these feeds.