After a stormy few months at Twickenham, the departure of Martyn Thomas represents a lifting of the clouds.

Ignore the official statement about "spending more time with the family", and the reference to the end of his contract. Thomas was forced out by the Rugby Football Union 12-man management board of which he was a part. Without doubt, they were under huge pressure from the clubs to remove him at the earliest opportunity.

He will remain in place until 16 December, by which date a new chief executive will have been appointed. The current chief financial officer Stephen Brown will step in as the interim CEO, until the new person takes charge.

Thomas will also relinquish his other high profile roles, as the RFU representative on the International Rugby Board, the Six Nations Committee, and the board of European Rugby Cup.

Most significantly of all, he will lose his post as the chairman of the 2015 Rugby World Cup, to be held in England. Thomas had worked hard to secure the hosting rights for the RFU. It will be a bitter pill for him to swallow.

The 67-year-old was at the top of English rugby for six turbulent years. In his previous role as chairman, he was the chief architect of the unsavoury dismissal of Brian Ashton as head coach in 2008. More recently he had become an all-powerful figure at the RFU, but his critics argued that his determination to cling onto power was rotting the system.

The number of his opponents grew alarmingly over the course of this summer, many of whom had once been his close colleagues. During this period he manufactured the sacking of John Steele, just nine months after appointing him as chief executive. 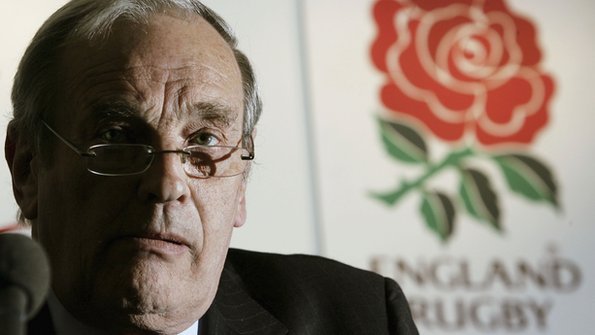 Chairman since 2005, Thomas had survived in his position in the past, but the axe finally came down on his head. Photo: Getty

He followed that with a breathtaking decision to threaten the RFU's chief disciplinary officer Judge Jeff Blackett with a defamation suit, following critical findings of his own role in the Steele episode.

Many believed that if Thomas had stayed in his post, it would have paralysed the RFU until well into the new year, at a time when they desperately need to be finding stability and direction. If the board had not demanded his departure, the clubs would have called a special general meeting, and forced through a vote of no confidence. He had survived two of them already.

Thomas was also the subject of an investigation to establish if he should face disrepute charges, following the Steele farce. England's poor World Cup campaign both on and off the field tarnished his reputation still further.

So what are the ramifications of his demise? The review into England coach Martin Johnson's three-and-a-half year tenure - a review that Thomas had personally commissioned from former international Fran Cotton - will now be scrapped. The proposal had attracted a number of vocal opponents. Cotton had already passed judgement on the Johnson regime in radio and television interviews, and the players were refusing to cooperate with it.

Now Rob Andrew's internal review will feed into the one done by the Professional Game Board (a body combining the RFU, the Premiership and Championship clubs, and the players' union, the PRA). It seems the findings of these two will form the basis of a decision to retain - or to dispense with - Martin Johnson and his coaching staff.

The RFU has also committed itself to another review - this one "an independent review to ensure the best performance systems are in place going towards RWC 2015". It will be convened after the conclusion of the Professional Game Board review. Its make-up and terms of reference will be confirmed at a later date.

So Johnson is no closer to knowing his fate as England manager, and neither are his coaching staff. But the overbearing figure of Thomas will be gone by Christmas.

And the landscape is different now.

I'm Alastair Eykyn and I am a rugby commentator for BBC Radio and TV. My job also involves having my nose to the ground for all the interesting rugby stories. You can follow me on Twitter @5LiveRugby.

Here are some tips on taking part and our house rules

You can stay up to date with Alastair Eykyn's blog via these feeds.