What is at stake in the Tunisian elections?

Tunisians will go to the polls on Sunday to vote in their first elections since the ousting of former President Zine el-Abedine Ben Ali in January. 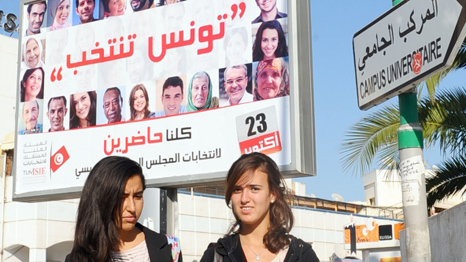 Tunisia is where the Arab Spring began and the vote for a constitutional assembly is being watched closely by other nations like Egypt and Libya.

Events in Tunisia also inspired protest movements across sub-Saharan Africa, including those in Uganda, Malawi and Senegal.

How did the toppling of one president change things for the rest of the continent?

What, if anything, can other countries learn from Tunisia's example?

If you would like to debate this topic LIVE on air on Wednesday 19 October at 1600 GMT, please include a telephone number.  It will not be published.