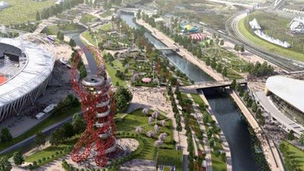 Have Olympic legacy chiefs done a massive U-turn - or maybe a screeching handbrake turn - on their goals under new boss Daniel Moylan?

Every time I have spoken to the London Legacy Development Corporation (previously known as the Olympic Park Legacy Company) in the last two years, I've been told that they are hoping to build a wonderful, environment for families to live in after the Games.

The talk has been of "terraced housing, mews housing and duplex apartments within tree-lined avenues, intimate streets and open squares."

There are plans for the Park to have an entertainment district near the Olympic Stadium, which will stage concerts as well as sport, and the Orbit Tower is likely to be a big tourist attraction.

But legacy officials have told me before that they want the entertainment part of the Park to have the relaxing atmosphere of London's South Bank with its theatres and cultural activities.

So, I'm very confused today as I read in a national newspaper about leaked plans for Formula One motor racing in the Park.

One of the bids for the stadium is said to involve a company keen to run a world championship race through the Park.

Chief executive Andrew Altman didn't mention this to me when I took a boat with him the other day through the Park. The talk was of a calm, green environment for east Londoners.

And, of course, I asked him about the stadium plans and Formula One wasn't mentioned.

So, I can only assume it's all part of the new regime under Boris Johnson-appointed Moylan, who has taken over from Baroness Ford as LLDC chair in the last few weeks.

Altman has also just announced he is leaving in August so it's all change at the Corporation, which is run by the Mayor.

On the surface it sounds like an ambitious, exciting project and a good idea to grab newspaper headlines.

But how practical is it to run an annual F1 race through an area where they want to build more apartments and houses after the Games?

It works in Monaco, the motor racing fans will say. But of course, Monte Carlo is a different kind of place.

The last time I was in Monaco when the world athletics championships were awarded to London, a British tax exile told me that anybody who wanted to live there had to prove that they could pay all of their bills WITHOUT working.

So, if they don't like the Formula One week, most of them can jump on a flight to their second, third or fourth, residence near a beach somewhere.

The last time I looked, very few people in Stratford could afford to do that.

Anybody wanting to buy a flat or house on the Park may also think twice when they find out that every year, their peace is going to be upset by noisy motor racing cars.

And there's plenty to homes to sell yet.

Now, this could all be just headline-making. Under new leadership, the Corporation is maybe keen to show it is cracking on with the legacy as we get close to the Games.

But that would also be a change of policy.

Baroness Ford's tactic was always to keep commercial confidentiality while she was negotiating deals and not to make a lot of public noise about bidders until contracts were signed.

The Olympic Park Legacy Company was always very careful not to talk about bidders.