Velodrome set to steal the show in 2012

A couple of years ago I stood in the middle of a big, muddy hole in the ground at the Olympic Park for a live broadcast and attempted to persuade viewers that it was exciting.

It wasn't really. The rain poured down and I'm not sure people watching appreciated that I was standing in the middle of the site where British cyclists will bid for medals in the 2012 Velodrome.

There's no need for imagination now. The Velodrome opened officially today and I think it is going to be the Olympic venue which the world remembers the most when the Games are over.

That's because of its curved roof outside and its fantastic design inside where spectators will be close to the action.

It's funny how the "Pringle" nickname for the building has stuck. People will start rewriting history and claiming they came up with it but this is how it really started.

It was the Press Association reporter Helen William who first said the roof was like a Pringle when the design was first unveiled at a news conference.

Sitting next to her - and ever keen to borrow a decent line for a story - I immediately stole it and mentioned it in a live broadcast an hour or so later. Helen also mentioned it in her report that day.

And now everybody talks about "The Pringle" and I gather the architects have even accepted it - reluctantly. But it all began with Helen's comments.

This is going to be a venue where Britain is hoping to win plenty of medals and I would advise you to get in the ballot for tickets for the action.

The seats go all around the track, which is unusual for cycing venues. And they are going to sell tickets so the fans (and not the media or VIPS) are really close to the action and able to cheer on the riders.

The atmosphere in the Beijing Velodrome wasn't great and London 2012 want to make their venue much better.

And what about the Aquatic Centre? Wasn't it supposed to be the iconic venue? 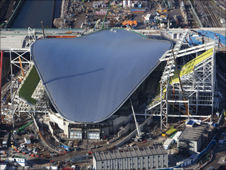 Well, with respect to the architect Zaha Hadid, I don't think the swimming venue looks as spectacular as the Velodrome because of the added seating stands on both sides.

It is supposed to look like a super-smooth stingray with its curved roof but, to me, it looks like a fish with blow-up armbands at the moment.

It may not be until after the Games, when the stands are removed, that we see the beauty of the Aquatics Centre.

My feeling is the Velodrome will grab all the glory in 2012.