The gloves are off for "The Payback Series"

The first thing I noticed when I opened my copy of the Hyderabad Times this morning was a full page advert promoting the forthcoming one-day series with England. The headline was "Time for Vengeance - The war between India and England resumes from 14 October."

This was accompanied by a picture of several members of the India side dressed in army combat gear holding bats and stumps as if they were guns and other weapons. The sponsors of the ODIs are describing the forthcoming matches as "the Payback Series".

I think you can safely say that the Indian public were hurt by what took place in England over the summer - and they are looking for revenge. 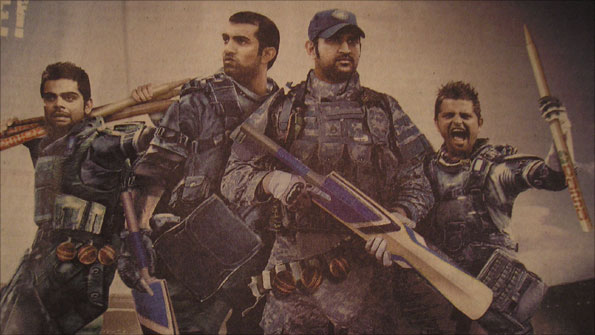 Last night on one of the numerous Indian television channels dedicated to cricket, a discussion was taking place with the headline "the Grudge Matches". Former India captain Sourav Ganguly was the special guest and he was in typically combative form.

The topic of discussion was whether current captain Mahendra Dhoni should have been allowed to miss the England series after reportedly asking the selectors for a break from the game. Dhoni has apparently played 112 days of cricket over the last 12 months - all of them as captain, wicketkeeper and batsman. This does not include all the days he has been practising or training.

Anyway, the presenter asked Ganguly for his thoughts, arguing that perhaps England look after their players better by pointing out that James Anderson had been rested for this tour.

But Ganguly came straight back at the presenter. "I would say that Anderson has not been rested," he said, "more likely dropped. Did you see how badly he bowled in the World Cup over here? He's OK at the start if the innings when the ball is swinging, but during the death overs he goes all over the park. That is the real reason he is not here!"

As he showed throughout his career as a player, Ganguly is not a man worried about ruffling a few feathers. But it is another example of how it appears India want to be up for the fight over the next few weeks to show England why they won the World Cup in such thrilling style only a few months ago.

Talking about ruffling feathers, the main topic of conversation amongst the press pack at England training today centred around the revelations expected in the forthcoming serialisation of Graeme Swann's autobiography, The Breaks Are Off. We expect excerpts to reveal that Swann did not believe that Kevin Pietersen was the right choice as England captain and, unlike Andrew Strauss, is not a "natural leader of men". We also believe Swann will be critical of Pietersen's tactics during his short reign in charge.

However, an England team spokesman played down talk of any possible rift in the camp caused by the book, saying that the England management received a copy of the manuscript before publication and had no problems with it.

He added that Swann and Pietersen had been laughing and joking all tour with no problems. It was said that Swann is merely expressing an opinion - and he is a man with plenty of those!

From what I have seen, there is no evidence of any disharmony in the England squad. Instead, there seems a steely determination to succeed in the 50-over form of the game.

I spoke to Ravi Bopara, who began his tour with a crucial knock of 73 in England's first warm-up match. He said that he was excited by the "fierce competition for places" and that the team were focusing on trying to build a World Cup winning side.

He added: "We've won the World Twenty20, we are the number one Test side but the one thing we really want to get right now is the 50-over game. We have a fantastic opportunity to win the World Cup in 2015... probably our best chance in years."

Well, a good start to showing that 50-over focus would be by beating the current world champions in their own back yard. I'll have updates on BBC Radio 5 live and via Twitter @tmsproducer from England's final warm-up match on Tuesday. Then we will start our winter Test Match Special coverage from 0945 BST on Friday for the first of five one-day internationals, with commentary on BBC 5 live sports extra, BBC Radio 4 Long Wave and via the BBC Sport website in the UK.