Dhaka is known as the "Rickshaw Capital of the World" with reportedly over 400,000 of the famous two wheeled carts making slow progress along the cities roads every day.

I say slow progress because so far the horrendous traffic here in the capital of Bangladesh is the only negative side of what has so far been an enjoyable start to this tour.

Dhaka is one of the densest populated cities on the planet with they say more than 40,000 people for every square kilometre, that is more than ten times the figure for London. And it can sometimes seem that virtually every one of those people here has some sort of vehicle out on the road at any one time.

But the secret, as I discovered on the first morning of the opening match of the tour, is to get to the roads early. I had been warned to allow up to two hours for the relatively short trip to Fatullah on the outskirts of Dhaka, so I arranged to leave my hotel at 6am so that I made the 9am start in good time. Needless to say, I actually arrived at the ground at 6.25am!

You are never quite sure what to expect when you turn up to a new ground for the match of a tour, so I was a little nervous when I arrived at the Narayangonj Osmani Stadium. At first, I wasn't sure I was in the right place as initially there was no sign of players, officials or anything resembling a crowd. But I was then strangely reassured to see a large bus pull up next to me full of soldiers and security men. Unfortunately, in the current climate this is an obvious sign that you have arrived at a international sporting event.

As I got out of the car, I was met by an official from the Bangladesh Cricket Board who announced that he was waiting to personally escort me to a commentary box. After a brief tour of the facilties he introduced me to one of his colleagues, Alam, who he informed me was to be my "BBC helper" for the day. Alam is a local cricketer who had been employed to provide any assistance I needed throughout the game.

While the broadcast lines were being fitted in the morning, Alam helped me find a suitable roof where I could set up the small satellite dish I was using to make contact with 5 live to bring early news on the game. The roof I found was also being used as a security base - and it was more than a little intimidating trying to describe Craig Kieswetter's fantastic batting surrounded by 15 soldiers all armed with large rifles. 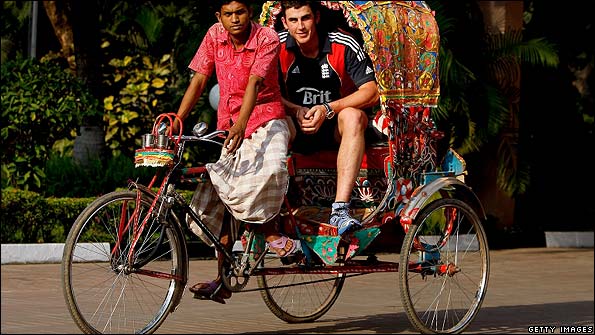 Disturbingly, one of the soldiers seemed to be taking extra interest in what I was saying and was getting more and more anxious as my report went on. As I finished he came over and I feared what might happen next. He then put his hand in his pocket to pull something out - but it turned out he had a small portable radio with him which, he showed me, he had tuned to the BBC World Service. The reason he was looking anxious was that I think he was expecting the report I was doing to be going out live on his radio. I'm not sure he understood my explanation of the different kind of BBC outlets, but he seemed happy enough and bid me farewell with the words "I see you for the next bulletin."

The opening warm-up game was an enjoyable affair thanks especially to the fantastic hitting of Kieswetter. There may be some debate about another South African-born player in the England set-up but he seems a impressive young man and potentially quite a player. The last few days have not been such a good experience for another South African-born batsman, Kevin Pietersen and he will be pleased to see the back of fast bowler Alauddin Babu who conjured up a genie from the lamp to dismiss him twice in two days for a total of six runs.

However, after his impressive batting in Dubai, there is no doubt about Pietersen's place - but there'll be plenty for England's selectors to ponder ahead of the one-day series. Matt Prior, despite being bizarrely reprieved when the umpire called a dead ball because of music playing in the ground, probably did enough to retain his place with an unbeaten 64 in the second game. Ryan Sidebottom looked fit and bowled with trademark aggression - but who will join him in the bowling attack with Shahzad, Plunkett and Tredwell all putting up good cases to join probably Broad and Bresnan.

Well, you won't have long to find out what England do because after the warm-up games the action starts in earnest on Sunday morning with the first one-day international.

I'm delighted to confirm that Test Match Special will have ball-by-ball commentary on the whole of the tour which consists of three ODI's and two Test matches on BBC 5 live sports extra and BBC Radio 4 Long Wave.

Leading our team will be Simon Mann, who is making his third visit to Bangladesh. He will be joined by "The Analyst" Simon Hughes who will be returning to the TMS commentary box following spells with us in Sri Lanka and India and during last summer's ICC World Twenty20. We will also be joined by top Bangladesh cricket commentator Shamim Chowdhury. Providing expert analysis will be the former England all-rounder Dominic Cork, Mark Butcher, who was part of the England side which last toured Bangladesh in 2003, and former Bangladesh player Athar Ali Khan.

There will be regular updates on BBC Radio 5 live throughout the tour - plus, here at bbc.co.uk/cricket , as well as the text commentary there will be Test Match Special podcasts and blogs. Also, keep checking the TMS Flickr page for photographs from behind the scenes.

So join us on Sunday morning from 0745 GMT on BBC 5 live sports extra and the BBC Sport website, and from 0800 on BBC Radio 4 Long Wave.