TMS has a wizard time in Ashes finale

It must have been a special afternoon at The Oval as it even brought together Harry Potter and his arch-rival Draco Malfoy.

Actors Daniel Radcliffe and Tom Felton took time out from filming the next instalment of the Potter films to join TMS at The Oval and they witnessed a thrilling day's cricket.

Of course most people weren't as fortunate as Daniel and Tom to see the Ashes regained live - but hopefully we were able to convey the drama on Test Match Special. 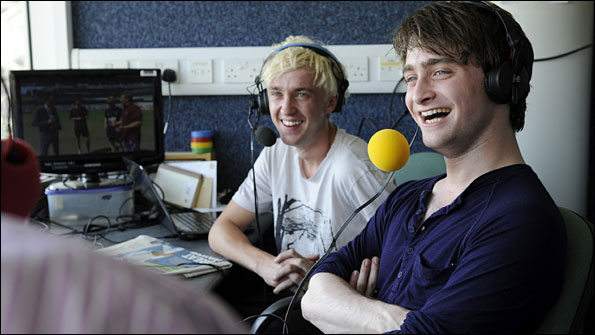 Dave e-mailed the programme to say: "I'm listening by satellite phone with a confused German, a disinterested Austrian and, best of all, a despondent Australian at Everest Base Camp. Watching the sun go down after a day's acclimatisation before beginning a four-man ascent of Everest tomorrow. So need England to wrap it up today!"

That was followed by Ewan and Jose, two seal and penguin scientists from the British Antarctic Survey who were listening on the Bird Island Research station on South Georgia on the icy Southern Ocean. They e-mailed to thank TMS for bringing "a little taste of summer in the depths of our winter".

Peter Edgerton e-mailed us to say he was "listening from the rock face of Gimmer Crag high above the Langdale Valley. I have been able to update other parties from time to time on the progress of the game!"

We had a text from one listener tuning to TMS via his mobile phone on a beach in Ghana. His message was that his wife had forgotten to pack a phone charger and he was desperately searching for a listener who would just happen to be also on the same beach and could help.

A few seconds later, Josh Grainger contacted the programme to say: "Hello, I heard the e-mail you've just read out, and i have got two spare phone chargers, i'm in Halloway beach in Ghana, hope it helps. I'm wearing a fluorescent yellow top, so I'll be easy to see!"

I hope the two were able to make contact especially in time for what was unsurprisingly voted the TMS Champagne Moment - the run-out of Ricky Ponting by that man Andrew Flintoff.

The dramatic dismissal led to an e-mail discussion about "where were you when Freddie ran out Ricky?". One listener told us: "I was dealing with water pouring through my ceiling from a burst pipe as Ponting was run out. I'd put a screw through my own pipe so Freddie cheered me right up."

Another e-mailer, JD, was also suffering at the key moment. He told us "I was being dumped by my girlfriend at the exact moment Ponting was run out. At least I had Freddie's heroics to make me smile", while a listener in Phoenix, Arizona told us he was listening via wireless speakers lying on a sun bed floating on a swimming pool - "Unfortunately the excitement of the wicket led me to capsize and lose transmission."

Wherever in the world you were listening to us, I'd like to thank you for tuning in and for getting in touch. If you would like to hear a full review of the Test, or hear some of our special interviews with Lily Allen or the Harry Potter actors, check out the Test Match Special podcasts at bbc.co.uk/tms.

We will be back on air at 1400 on Sunday, 30 August for the start of the limited-overs series between England and Australia, getting underway with the first Twenty20 game at Old Trafford.

Joining the normal TMS team at his new home ground will be former England and now Lancashire coach Peter Moores. Plus we have a variety of Australian's joining us for the one day matches including TMS regular Jeff Thomson plus Stuart Law and Rodney Hogg.

That is because Matthew Hayden is returning home to Australia after a very successful debut on TMS. It has been great fun having Matthew as part of our team and hopefully the quality of the cakes he was able to sample in the TMS box helped make us for the disappointment of the Australians' defeat. Haydos just happened to be on air when both Ricky Ponting and Michael Clarke were run out and for once it was the cricket which left him speechless rather than a mouthful of chocolate brownies.

Finally - I have mentioned a few times that you must take a listen to the Test Match Special Ashes Archive at bbc.co.uk/ashesarchive. I am just really pleased that although the 2009 vintage may not have had the same quality as 2005, it certainly had plenty of twists and turns and moments of great drama which I am sure you will want to listen to again for years to come.