I am researching the extraordinary history of the West's relationship to Afghanistan over the past 200 years. It is a very complex, and sometimes weird, story. These are notes on some of the characters and episodes involved.

There are many individuals and fragmentary events that have led to the present situation in Afghanistan. But there was a moment in 1971 when four separate things happened in and around Kabul that in their different ways reached back into the past and forward into the future.

That year the BBC sent a film crew to Kabul to recreate the first great military disaster of the British Empire - the retreat from Kabul in 1841. The BBC began by gathering Afghan tribesmen together to be extras. They acted out being taught cricket by the British. The Afghans then pretended to be fierce rebels storming out of the Kabul Bazaar to attack the British camp outside the city.

The BBC's adviser was Louis Dupree.

He was an American who had lived in Kabul since 1955. He will appear in many different ways in this story. But for the moment all you need to know is that he had once walked the route of the British retreat alone in winter, and also that he knew everyone in power in Kabul.

Dupree had noticed that the demonstrations by the students at Kabul University were increasing, and often degenerating into fights. At the end of 1970 he took a photograph of one. It is grainy and indistinct, but he had caught a moment which was to have immense consequences for everyone in Afghanistan, and around the world. 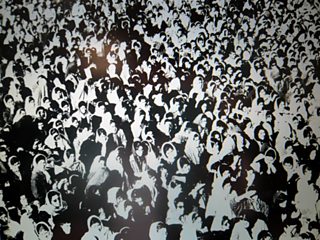 Kabul university had been created by the West, in particular by America and West Germany.

Then the Soviet Union decided they had to pour money in too. So they built the enormous Kabul Polytechnic.

Both were seedbeds for western ideas, Foreign students and teachers from the west had flooded in and with them came the modern revolutionary ideas from the campuses in Europe and America. And very quickly the Kabul students set up a wide range of Leninist and Maoist groups.

Dupree had captured the moment when those groups had begun to confront a new group of revolutionaries on campus. They were the Islamists. The Islamists too had taken revolutionary ideas from the West but they had fused them with Islam. One of the Islamist groups had found a poem written by a Leninist student that praised Lenin using a term reserved only for the prophet Mohammed. 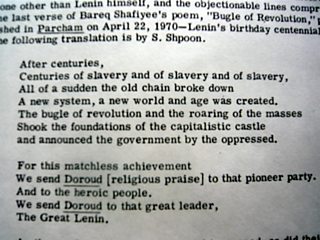 They sneakily showed it to a group of conservative mullahs in Kabul and all hell broke loose.

All sorts of people were in and around the demonstrations and battles that followed and many of them will appear later in this story.

Kabul was trying to imitate the West in other ways. Abdul Habib Aziz had recently opened the only supermarket in Afghanistan.

Then in the spring of 1971 one of Italy's leading conceptual artists turned up in Kabul and decided to buy the building above Mr Aziz's supermarket and turn it into a hotel.

The artist was called Alighiero e Boetti. Boetti is a fascinating and mysterious figure. He was part of the artistic avant-garde that emerged from 1960s radicalism in Italy.

Boetti was fascinated by chance and randomness. He would post letters to other artists he knew with the wrong address and then show the ones that were returned. His works often had secret codes built into them. Some of the codes have been cracked, others remain mysterious. No-one knows if the hotel was a conceptual art-work in itself or just somewhere for him and his friends to stay. But what is certain is that Boetti saw in Afghanistan a way of solving what he saw as the central crisis in the West, the overwhelming belief in the individual as an inspired creator.

Boetti had started as a member of the Arte Povera group. Like many avant-garde groups at that time they wanted to challenge the 'system', and to do that they attacked the notion of self-expression and the creation of things and objects - which they believed was central to consumer capitalism. Boetti said that what he saw in Afghanistan was the opposite. It was a country empty of created things.

"Afghan homes, for example, are empty: no furniture therefore no objects commonly placed on furniture. There are only a few carpets and mattresses on which people lie down, drink, smoke and eat. I also like the fact that Afghans wear the same clothes at day and at night. Nothing has been added to the landscape. Rocks are moved and used to build cube houses. The resistance with which Afghans oppose our civilisation has always amazed me."

Following his principles Boetti found Abib and Fatima. They were embroiderers, and he gave them maps of the world as it was then in 1971 with all its borders. It was, he said, a given diagram of power in the world. He asked the two women to create a series of embroidered maps where each country would be coloured by its own flag. After that Boetti said, I did nothing. And 500 women started making the maps overseen by Abib and Fatima. 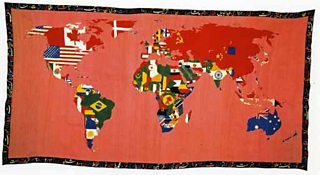 Just as the Afghan student revolutionaries had strange dreams of the west which they were going to try and impose on Afghanistan, so Boetti was trying to use a strange fantasy version of Afghanistan to free himself from the conventions of the west.

Meanwhile the BBC crew had moved location along the road to Jalalabad. They were retracing the terrible retreat of British soldiers when out of 16,000 only one man made it the 115 miles. Again the BBC used local tribesmen to act out the massacre - showing how their ancestors had poured fire down on the terrified British soldiers.

The tone of the BBC programme is of its time. It is determined also to show the dark side of the British Empire, the horrific acts of cruelty ordered by the British high command. It is saying - we may have lost an empire but we have become better people, and such horrors will never happen again.

At the end of the film is a scene showing how the British would tie Indian rebels to cannon muzzles and blow them to pieces. But a few years ago that section was edited out and you have to get special permission to show it. Things had changed again.

It is very horrific and absolutely not for the squeamish, but if you want to have a look at it - here it is.

As the BBC were filming a group of students from Nottingham University drove past. They were a group of mountaineers who were on their way to their first expedition outside Europe. They were going to climb a peak in the Hindu Kush called Koh-i-Khaaik. Their leader was called Peter Boardman. He would become one of the world's most famous climbers, but this particular trip was going to go terribly wrong.

In 1977 Boardman recorded a description to camera of what happened both literally, and inside his own mind during his terrifying ordeal. And how Afghanistan had haunted him ever since.