THE BABY AND THE BAATH WATER 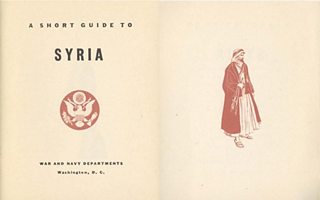 Much of the debate about whether to intervene in Syria or not is taking place in a strange ahistorical vacuum. As with so much debate about humanitarian intervention the underlying world view is of a simplified story of bad dictators and good, well intentioned westerners who must somehow intervene to stop him.

But the truth is that America has a very complicated relationship with Syria which stretches back over sixty years.

Back in the 1950s America set out to intervene in Syria, liberate the people from a corrupt elite, and bring about a new democracy. They did this with the best of intentions, but it led to disaster. And out of that disaster the Assad regime rose to power.

America's actions were by no means the only factor that led to the violence and horror. But their unforeseen consequences played an important role in shaping a feverish paranoia in Syria in the late 1950s - which helped Assad, and his Baath Party, come to power.

A while ago I wrote the story of America's strange relationship with Syria and the dark and bloody twists and turns that resulted - from 1947 onwards. I thought it would be good to link to it again because so much of what happened is relevant to today's debate.

You can find the original post on Syria here.