In early 1970s the Italian conceptual artist, Alighiero e Boetti often visited the hotel he had bought in Kabul, Number One Hotel. By 1972 it was being used not just by Boetti's friends but by more and more western travellers.

All around them in Kabul revolutionary forces were emerging who wanted to overthrow the King. One of these forces was Islamism. The westerners heard odd stories about a man called The Engineer on the university campus. He was supposed to be going round throwing acid in the faces of girls who didn't cover their heads.

Two hundred years before, the first modern Islamist had emerged to the north of Afghanistan, in the Caucasus. He was called Sheikh Mansur. Mansur fused ideas of nationalism and anti-colonial struggle with Islam and used them to lead a struggle against the Russian forces that were trying to occupy Chechnya and Daghestan. 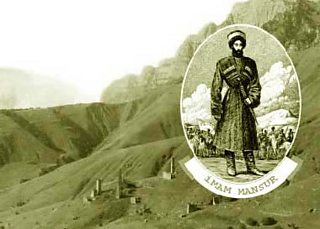 In 1876 a professor in Turin discovered a collection of letters written by Sheikh Mansur to the professor's father. In them Sheikh Mansur reveals that he was in reality an Italian from Turin called Giovanni Battista Boetti.

He was a direct ancestor of Alighiero e Boetti.

The letters tell an amazing story. Giovanni Boetti had been born near Turin. In the early 1770s he had run away from home and become a monk for the Dominican order. He then travelled as a missionary in Asia Minor and had all sorts of adventures and scandalous intrigues and love affairs. Then at some point Boetti converted to Islam and became a "Mussulman Prophet" with the power to raise and lead an army of thousands of Muslims.

From other accounts of Sheikh Mansur it is clear that this power came from the fact that he had fused what were modern western ideas of nationalism and anti-imperialism with Islamic ideas. Up to that point the resistance to the growing Russian empire had been from secular leaders in Chechnya. And they had failed.

Mansur-Boetti was something new and mysterious.

Then the Russians noticed Boetti. In 1785 General Potemkin wrote to Catherine the Great:

"On the opposite bank of the river Sunja in the village of Aldy a prophet has appeared and started to preach. He has submitted superstitious and ignorant people to his will by claiming to have had a revelation"

The Russians decided to send an army of three thousand men to destroy this prophet. They marched though the mountains and the farmland where Grozny now stands and across the river into the village of Aldy. But when they arrived they found no-one there. It was as if Boetti and all his army had disappeared. "As though they were ghosts" wrote one Russian.

The Russians destroyed the village completely and then set off on the return march. But Boetti had hidden his army in the forest covered mountains and he had set up an ambush. The Islamists slaughtered over half the Russian force and most of the survivors drowned trying to flee across the Sunja River. It was the start of what the Chechens today see as a 200 year war to remove the Russian occupation.

Here are photos of Giovanni Battista Boetti and his descendant Alighiero e Boetti. Both were cultural warriors - the fake Sheikh struggling against the Russian attempt to destroy Chechen national identity, the later Boetti struggling against the culture of individual self expression which he believed was corroding the west. The Sheikh used armed struggle, his descendent used the possibly less effective weapon of performance art. 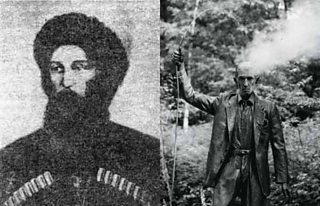 But maybe its not true. Over the last 100 years scholars have argued about the authenticity of the letters.

Possibly they were extraordinary fantasy? An elaborate fiction about Islam and the west written by the older Boetti. Or possibly forged and planted in the archive by someone else? Noone knows for sure.

By the mid 20th century the force of Islamism had disappeared from the western mind. In the simple world of the cold war it seemed as if the dangerous complexities of nationalism and politicised religion had virtually disappeared. Here is part of a film made for the BBC in 1961 by Fitzroy Maclean. He was an upper class British adventurer who had links to the Secret Service. He was also reputed to be one of the models for James Bond.

Maclean's film is about Khruschev's attempt to wipe out all national identity in the Soviet Empire. Maclean is suspicious, he travels to the Caucusus and sees another possible unified future. A world where everyone will become American.

But he also adds a warning. He points out that throughout Asia and Africa the Soviets are doing precisely the opposite - encouraging nationalism as a weapon in their cold-war struggle with America. Might this not have unforeseen consequences for the Soviet Union in the future?

Last week six Italian soldiers died in a suicide truck bomb-blast in Kabul. The deaths shocked Italy and a state funeral was held in Rome. At the funeral Prime Minister Berlusconi became the first western leader to call for the western troops to withdraw from Afghanistan.

But Roberto Saviano the expert on the Neapolitan mafia - the Camorra - pointed out that Italy's relationship to Afghanistan was far more complicated. The soldiers who died, he said, came from the south of Italy, an area where their life chances have been blunted by corruption and organised crime. Their only option out of the trap was the army - which had then taken them to Afghanstan. The country that produces 90% of the heroin in Italy and the rest of Europe.

And it is that heroin that fuels the power and corruption of organised crime in Southern Italy.

But back in 1972 that trade with Afghanistan did not exist. Until the westerners began taking heroin. In his hotel in Kabul Boetti was one of the first, but many, many more would follow.

At the same time he was still pursueing his project of using Afghanistan to attack the western belief in the artist as individual creator. He got the Afghan women embroiderers he was working with to embroider another coded piece. But this time the code numbers referred to the anniversary of his birth and his predicted date of death - he was still trapped by individualism 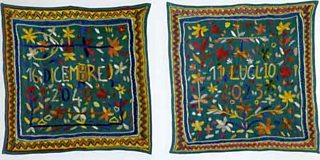 This is a section of a BBC film shot in the summer of 1977 on the Afghan - Iran border. The customs officers are searching the line of travellers coming back from Afghanistan towards Europe. Then their eye is caught by the VW bus of an Italian lawyer and his wife.

The film returns to the Italian lawyer few days later in Mashhad prison. It is a brief but very moving interview. 18 months later the revolution in Iran was going to begin, and Mashhad prison would become one of the places where the revolutionary regime locked up its prisoners. It then became a place of mass execution as the Islamists around Khomeini hi-jacked the revolution.

I have tried to find out what happened to the lawyer - Roberto Sagressi (?). There is no "programme-as-completed" form for the film in the BBC archives. He just simply disappeared. It would be good to know what did happen to him.

In the face of Berlusconi's demand for withdrawal the other western leaders have asserted that they must continue the fight against the Taliban.

But who are the Taliban? They - like everything else in this story - remain a mystery. We never see them on the TV. They are always just out of sight behind the trees in the shots. 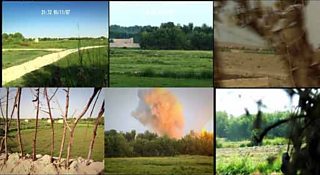 And again and again journalists who accompany the troops report that when they enter a village from which they have been attacked, which they have then bombed and shelled, there is no-one there. There are no bodies, not even blood on the ground. But they know the fighters have been there. The Taliban have disappeared the soldiers say "like ghosts"

Here's a fascinating report - both written and filmed - by Sean Smith of the Guardian. It was filmed during Operation Panther's Claw this year.

There are also growing reports that the Taliban are no longer a fundamentalist group. That those politics and ideas have been destroyed by greed for the power and profits that the drugs trade brings. They too have become the victims of heroin. They are gradually becoming are an eastern version of the Camorra. Both groups shaped and supported by the insatiable consumer demand in the West.

We aren't fighting what we are told we are fighting.

Here is a bit from a really good report by Stephen Grey which Newsnight broadcast. The troops enter a Taliban town. All "the ghosts" have disappeared - but they have left behind 11 tons of heroin.

In 1791 Giovani Batista Boetti was captured. He was taken to Catherine the Great who wanted to see the man who had used Islam to defeat the Russian mighty army. He was then locked up in St Petersburg fortress. he wrote one last letter to Professor Ottino's father. Posted from St Petersburg. Then he died in 1794.

But maybe the letter was a fantasy written by Boetti. And really Sheikh Mansur came from the village of Aldy outside Grozny. No-one knows

Almost exactly 200 years later his relative Alighiero e Boetti died - of cancer - but also weakened ,some believed, by his addiction. It was 1994. The day he died the Taliban began their march from the south to take over Kabul and they promised they would destroy the drugs trade. They were supported by the west.

At the same time the Russian army invaded Chechnya to suppress the insurgent nationalism and Islamism. Here is one of the earliest photos - a Russian helicopter downed in the same forests that Boetti - aka Mansur - had destroyed the Russians in 1785. Alighiero e Boetti had asked that his ashes be scattered in the seven coloured lakes of Afghanistan called Bandi A Mir. But because of the fighting between the Taliban and the warlords it couldn't happen. His ashes still remain in Italy.

He had missed the predicted date of his death by 29 years. 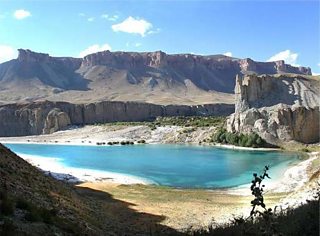