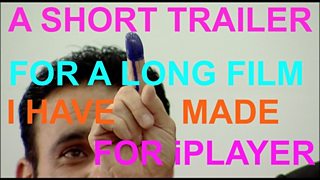 Politicians used to have the confidence to tell us stories that made sense of the chaos of world events.

But now there are no big stories and politicians react randomly to every new crisis - leaving us bewildered and disorientated.

Events come and go like waves of a fever. We - and the journalists - live in a state of continual delirium, constantly waiting for the next news event to loom out of the fog - and then disappear again, unexplained.

And the formats - in news and documentaries - have become so rigid and repetitive that the audiences never really look at them.

In the face of this people retreat from journalism and politics. They turn away into their own worlds, and the stories they and their friends tell each other.

I think this is wrong, sad, and bad for democracy - because it means the politicians become more and more unaccountable.

I have made a film that tries to respond to this in two ways.

It tells a big story about why the stories we are told today have stopped making sense.

But it is also an experiment in a new way of reporting the world. To do this I’ve used techniques that you wouldn’t normally associate with TV journalism. My aim is to make something more emotional and involving - so it reconnects and feels more real.

BBC iPlayer has given me the opportunity to do this - because it isn’t restrained by the rigid formats and schedules of network television. It's a place you can go to experiment and try out new ideas.

It is also liberating - both because things can be any length, and also because it allows the audience to watch the films in different ways.

The film is called Bitter Lake. It is a bit of an epic - it’s two hours twenty minutes long.

It tells a big historical narrative that interweaves America, Britain, Russia and Saudi Arabia. It shows how politicians in the west lost confidence - and began to simplify the stories they told. It explains why this happened - because they increasingly gave their power away to other forces, above all global finance.

But there is one other country at the centre of the film.

This is because Afghanistan is the place that has repeatedly confronted politicians, as their power declines, with the terrible truth - that they cannot understand what is going on any longer. Let alone control it.

The film shows in detail how all the foreigners who went to Afghanistan created an almost totally fictional version of the country in their minds.

They couldn’t see the complex reality that was in front of them - because the stories they had been told about the world had become so simplified that they lacked the perceptual apparatus to see reality any longer.

And this blindness led to a terrible disaster - support for a blatantly undemocratic government, wholesale financial corruption and thousands of needless deaths.

A horrific scandal that we, in our disconnected bubble here in Britain, seem hardly aware of. And even if we are - it is dismissed as being just too complex to understand.

But it is important to try and understand what happened. And the way to do that is to try and tell a new kind of story. One that doesn’t deny the complexity and reduce it to a meaningless fable of good battling evil - but instead really tries to makes sense of it.

I have got hold of the unedited rushes of almost everything the BBC has ever shot in Afghanistan. It is thousands of hours - some of it is very dull, but large parts of it are extraordinary. Shots that record amazing moments, but also others that are touching, funny and sometimes very odd.

These complicated, fragmentary and emotional images evoke the chaos of real experience. And out of them i have tried to build a different and more emotional way of depicting what really happened in Afghanistan.

A counterpoint to the thin, narrow and increasingly destructive stories told by those in power today.