21 Miles Off The Coast of Palestine

Here is a strange echo from history.

It is a documentary made by the BBC in 1973 about the story of the ship, the Exodus.

It was the ship full of Jewish refugees - many of them survivors of the Holocaust - that tried to break the British blockade of Palestine in 1947. The participants from both sides appear and describe in detail how British soldiers boarded the ship 21 miles off the coast of Palestine killing 3 of the refugees and wounding others.

It caused an international scandal and was a PR disaster for the British government. It is seen in Israel today as one of the most significant events that led to the founding of the modern Israeli state.

The shock was compounded when the British took most of the refugees back to Germany and put them on trains and sent them to internment camps.

Here is a still of the ship after it was captured by the British. 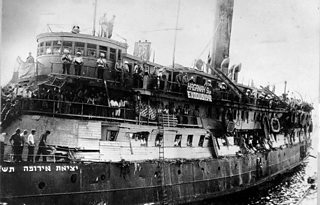 As you watch the film - it raises complex reactions and thoughts in your mind. But it is ironic that, although the two events are in many ways completely different, the Israelis are now preventing Palestinians and supporters of Hamas from doing what the Israeli defence organisation - the Haganah - tried to do over 60 years ago. From 1945 the Haganah, along with the Irgun, had been carrying out a terror campaign against British soldiers in Palestine. Then in 1947 they organised the Exodus operation as an attempt to break the British blockade.

It is full of all the central characters in the story - including the captain of the Exodus, and the commander of the British warship. He uses little models of ships to demonstrate how he came alongside and British soldiers jumped from special platforms onto the roof of the Exodus - and took over the wheelhouse.

For some unknown reason the film starts in colour - then goes to black and white and finally comes back into colour. I'm sorry about this - but it is fascinating.