Very few people in the west saw the present revolutions in the Arab world coming.

I think one of the main reasons is that we are still locked into a simplified way of looking at the Arab countries - above all Egypt - that began in the 1970s.

I wanted to go back and look at the roots of that powerful but distorted vision.

It dates back to the moment in 1977 when Anwar Sadat went to Israel to open the way to a peace treaty - that was then signed in Washington in 1979. 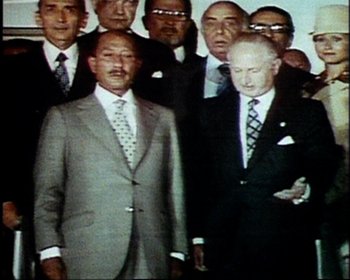 Ever since then we have tended to report on events on the Arab world through the prism of how it will affect the peace with Israel. At the same time western politicians have assumed it was safer to have the strong old men in power to prevent disruption of the peace accords.

These things are important - but by concentrating on them we have ignored a lot of other things and, to an extent, have created an imaginary Arab world.

I have found a fascinating documentary made in 1982 called "Why Was Cairo Calm?"  And I thought I would put it up because it shows very clearly and dramatically how that skewed vision began.

It begins in the days after Sadat's assassination in 1981 by an islamist cell of army officers. The American media had led an outpouring of shock and grief in the United States at the death of the heroic president. All the western leaders then travelled to Cairo to say goodbye to the man who had courageously changed the course of history.

But then they found that practically no Egyptians turned up to the funeral. And the western politicians and the American TV reporters couldn't understand why.

The documentary tries to find the answer.

It tells the story of Sadat's presidency - and how the American TV networks created a fantasy vision of him as a wise democratic leader who had opened up the Egyptian economy to the free market, and was loved by his people for making peace for Israel.

As the film shows - this was a complete illusion. And that when that image was played back to the Egyptian people they were angered and shocked. And the film makes a strong case that it was that anger that contributed to the decision to assassinate the president.

It has a great piece of footage from inside the court where the assassins are being tried. At the end of the trial one of them addresses the western media through the bars of his cage - desperately trying to tell them that they have a fantasy vision of Sadat.

The documentary argues that Sadat became an imaginary American hero - an illusion that he then came to believe. Or as one of the young Egyptians says in the film.