THE HELLS ANGELS TAKE A MINI-BREAK

Everyone goes on holiday in Britain. Even Hells Angels.

I've just found a wonderful, very funny documentary made in 1973 about a group of British Hells Angels.

It's about their daily life and culminates in them going on a weekend mini-break on a derelict barge in the pouring rain near Aylesbury.

They're obviously not very nice people (especially as they tend to go on about Nazis). And the film has a disapproving commentary that talks about their "psychotic tendencies" and their "empty daily existence". But as you watch the film you begin to realise that the director (or possibly the editor) was making a completely different film.

It uses the Hells Angels as a comic and exaggerated parody of the emptiness of the daily life for everyone in Britain.

The film is full of wonderful moments. The lead character - Mad John - goes round to see his wife, but completely ignores her because he finds a letter to him from the fountainhead of Angeldom - the California Angels chapter.

His wife stomps off leaving Mad John with his suitcase of memorabilia. Inside the suitcase is a magazine called "Big Chopper" and a real chopper. He sits with his only real friend - his alsatian dog called Hitler.

And the Hells Angels' holiday ends with all them all sitting together on the barge in the rain watching Dr Who on television drinking cans of lager.

Not much change there then.

Here are the stars of the film: 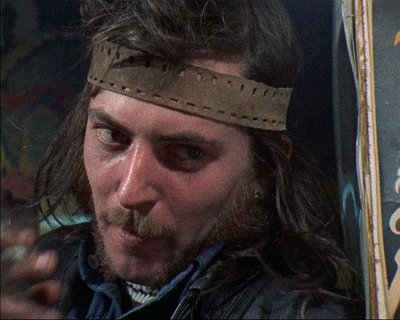 "Mad John" the Vice President of the Chapter. He was named "Mad John" by "Buttons" who was the first official Hells Angel's leader in Britain. (You can see Buttons' legendary autobiography - Buttons, The Making of a President - briefly in Mad John's suitcase.) 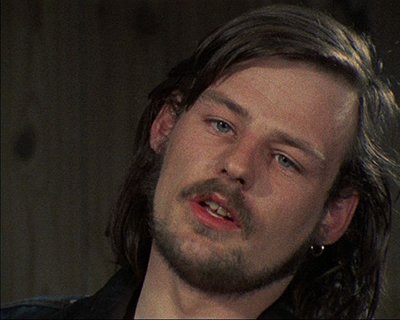 Karl - the Sergeant at Arms of the Chapter. He has been cross-eyed ever since his eyes were knocked out of their sockets in a fight. 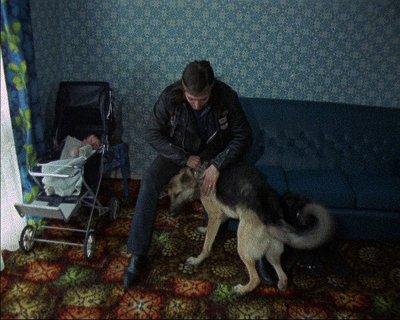 Mad John's dog called Hitler plus a great carpet and some fantastic wallpaper. 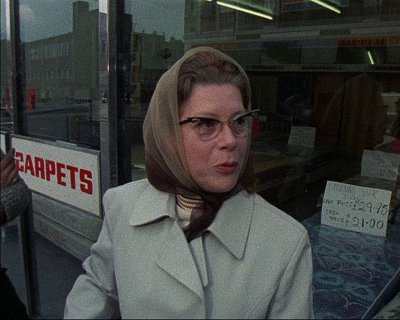 And Angel member Mick's mum who comes round to lend them a portable TV for the weekend.

She is asked what she thinks about her son being a Hells Angel - and she gives one of the best quotes I have ever heard. It is brilliantly comic.