BP is accused of destroying the wildlife and coastline of America, but if you look back into history you find that BP did something even worse to America.

They gave the world Ayatollah Khomeini.

Of course there are many factors that led to the Iranian revolution, but back in 1951 the Anglo-Iranian Oil Company - which would later become BP - and its principal owner the British government, conspired to destroy democracy and install a western-controlled regime in Iran. The resulting anger and the repression that followed was one of the principal causes of the Iranian revolution in 1978/79 - out of which came the Islamist regime of Ayatollah Khomeini.

And what's more, BP and the British government were so arrogant and bumblingly inept at handling the crisis that they had to persuade the Americans help them. They did this by pretending there was a communist threat to Iran. The American government, led by President Eisenhower, believed them and the CIA were instructed to engineer a coup which removed the Iranian prime minister Mohamed Mossadegh.

And the resulting anger at the coup among Iranians went very deep. It is the root of why America is now known as "The Great Satan" in Iran, and why the American embassy in 1979 was hated as "the nest of spies" by the revolutionaries.

Here is part of a Timewatch programme made in 1984 about the crisis that led to the coup.

It tells the story of how Mossadegh decided to nationalise the Anglo Iranian Oil Company - and the subsequent behaviour of both the company and the Labour government of the time - especially the Foreign Secretary, Herbert Morrison, who wanted to invade Iran.

Just as a background to The Anglo Iranian Oil Company. It had been created in 1901 and held a monopoly on Persian oil. The contract was grossly unequal. The company paid Iran only 16% of the money it earned from selling the country's oil. But it was probably even less than that. In 1950 alone the British company earned more in profit than it had paid Iran in royalties since 1901.

The company promised to build facilities - schools and hospitals - for the Iranian workers. But it didn't. The workers lived in a fly-blown hell, a shanty town called Kaghazabad, or Paper City. The workers were paid minimal wages and, as the film points out, the company decided to cut their hardship allowances in the middle of the crisis.

I very much like the archive that argues that only the British oil company has the skill to deal with disasters - in particular blow-outs and explosions at oil wells. The Iranians wouldn't know how to put them out, it says. But the British do and so should be allowed to stay in Iran because then it would be safe in British hands.

As the film makes clear, the British persuaded the Americans to mount a coup by telling them that Mossadegh was leading Iran towards communism - represented in Iran by the communist Tudeh party. This was not true. One of the leading Iranian historians, Maziar Behrooz, has stated simply

"The perceived Tudeh - communist - threat, as feared by the perpetrators of the coup, was not real."

But the CIA, led by Allen Dulles, believed it. Dulles sent the CIA's top Middle East agent - called Kermit Roosevelt - to run Operation Ajax. The plan, drawn up by the British and the Americans, was to bribe the street gangs of Tehran to create chaos, and then install an army general, General Zahedi, as prime minister.

The only problem was that the Shah of Iran - Mohammed Reza Shah - didn't want to join in the plot. But then the Americans sent General Norman Schwarzkopf to the Shah's palace. (Schwarzkopf's son led Operation Desert Storm). He bluntly told the Shah that he had no choice as Britain and America had already decided to go ahead.

Here is a picture of Schwarzkopf senior. He is a fascinating character. He set up a motorcycle task force to smash the mafia in America in the 1930s. Then he narrated the radio series Gang Busters. And he ended up helping create and train the Shah's notorious secret police - the SAVAK. Next to him is a picture of the young Kermit Roosevelt - before he got involved in regime change - sitting on his grandfather's knee. His grandfather was ex-President Theodore Roosevelt. 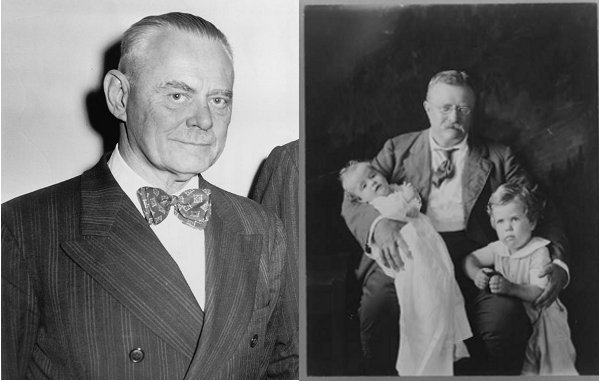 The coup succeeded and Mossadegh was overthrown.

But the price for the British was high. The Anglo-Iranian Oil Company now had to share the oil - with the Americans. A new consortium was formed. The leading American oil companies took a 40% share, while AIOC also had a 40% share. And in 1954 it changed its name to British Petroleum.

But the price for the Americans was also high. They had got the oil, and they had installed a pliable dictator in Iran. But the anger against their ruthless conspiracy was still seething - not just among the left but also among the conservative merchant class. These two groups would come together under the leadership of Ayatollah Khomeini in 1978 - their persistent anger at America and Britain being the force that bound them together.

But British Petroleum didn't give up on trying to subvert and avoid the decisions of democratic governments. In particular its own, British, government.

In 1965 the white minority Rhodesian government declared Independence from Britain to stop the imposition of what was called "majority rule". The Labour government imposed sanctions to try and topple the regime. A number of countries broke the sanctions - including Iran. But so did some British companies - notably two of the big oil companies - Shell and BP.

Here is a news report from 1978 where Frank Bough explains the very devious things that Shell and BP have been doing for ten years to break the sanctions. He uses a big 3D map to explain how they got the oil in.

But at the very same time the BBC had decided to make an epic 9-part documentary series about British Petroleum. And in 1980 the films were shown at prime time on BBC-2. They were presented by Trevor Philpott

The films were pretty sycophantic. At that time BP was still owned by the British government - and what you see is one large state-run organisation paying its respects to another.

But one of the films is fascinating in the light of the present BP crisis. It is about how the new intake of BP managers is selected, the kinds of training they get, and how they will progress up the company.

It was filmed in 1980, two years before Tony Hayward joined BP. And it gives a very clear picture of the culture that shaped him and many of the others that today run the company. I particularly like the executive role-playing game - played in an old country mansion - using staplers.

But listen to the voices of the executives - and their tone. In them you can hear the echoes of both the post-imperial arrogance and the lazy diffidence that led to the inept and cruel handling of the Abadan crisis back in 1951. And maybe to the inept and arrogant response to the crisis in America today.