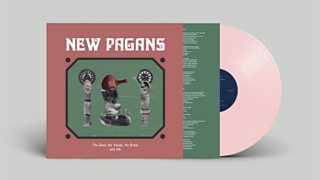 New year, new music! Belfast’s award winning New Pagans have just announced the release of their debut album ‘The Seed, The Vessel, The Roots and All’ due out on the 19th of March via the label Big Scary Monsters.

Not only have they announced an album release but to celebrate they’ve just delivered a brand new single ‘Christian Boys’ which is out now! Think fierce rock attitude meets driving rhythms, memorable hooks and lush guitar lines.

The band have stated that the song ‘calls out the people who blame others for their mistakes and don’t take responsibility for their own actions’. And although some of the lyrics may be controversial, Lyndsey from the band believes conversations like this need to happen, and shouldn’t be ‘off limits’.

After winning the best live act at the NI Music prize 2020, gaining the support from Steve Lamacq and others on 6muisc , Radio 1 , BBC Introducing, Radio X and Kerrang. The release of their debut album is the perfect next step. We’re so excited here at ATL for this next chapter of New Pagans!