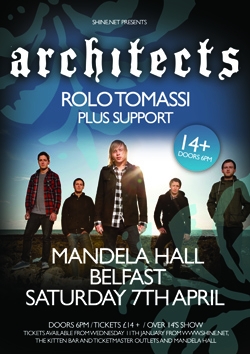 Brighton-based metalcore heroes, Architects, are on the road supporting the release of their fifth album, Daybreaker. This early evening affair gives Belfast's under-agers a rare chance to get in on the action; from the girl being sick outside to the testosterone-fuelled pit-bravado - it's safe to say the kids are a little too excited.

New York's Stray From The Path don't mess around getting the crowd fired up. Complex riffs, visceral screams and thundering breakdowns make for a brutal assault but Stray From The Path have enough melody that it's controlled chaos, but only just. The crowd respond in kind; a sea of bodies slamming into each other, swinging fists with reckless abandon. Vocalist, Drew York has the swarming masses in the palm of his hands; getting them to jump on demand and raise their middle fingers while orchestrating circle pits like a hardcore conductor. The brutality is only halted when a shirt flies out of a fist-wielder's back-pack as he scuttles off to reclaim his school uniform. This evening, Stray From The Path taught a lesson in NYHC.

Rolo Tomassi are the main support, and we sort of know what to expect but that doesn't stop them blowing us away. Front-lady, Eva Spence goes from fragile lullabies to blood-curdling scowls; bi-polar vocals accompanied by off-kilter rhythms and complex guitar lines, tightly-woven with synths and pounding drums to deliver a cacophony of sound.

Rolo Tomassi combine moments of serenity with ferocious technicality to create the soundtrack to a futuristic B-movie. A small section of the crowd embarrass themselves with a sexist chant as testosterone levels reach fever pitch. In such a male-dominated genre, it can't be easy doing what Eva does but she shrugs it off - "not tonight boys". Sheer class.

When the vocals are more restrained, front-man Sam Carter sounds a lot like Glassjaw's Daryl Palumbo while musically, Architects' are reminiscent of Dillinger Escape Plan but with a distinctly polished feel.

Carter scales the speaker stack before throwing himself into the heaving crowd of bodies; there's a bit of a struggle as he tries to get back out and he's obviously reluctant to get too close to the crowd again. Later, a fight breaks out - it's been waiting to happen all night. Carter is quick to denounce violence from the stage which is met with roars of approval. He also repeatedly thanks everyone for coming out to see them - they're obviously very appreciative of their fans - it’s nice to see.

Carter is joined on stage for a dual vocal attack with RoloTomassi’s Eva before Architect’s make their final hurrah as two band members scale opposite speaker stacks before hurling themselves into the sea of sweaty bodies.

In a similar way to Enter Shikari, Architects are building bridges to crossover to the mainstream but with a more straight-forward metalcore blueprint. After eight years honing their craft, they've perfected a sound with gigantic breakdowns, catchy riffs and choruses which, combined with the stunning lights show, on-stage theatrics and meticulous musicality, marks them out as the leading lights in the UK metalcore scene.