The Maccabees, We Cut Corners 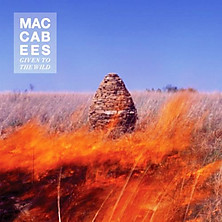 On a mild night that almost signals the beginnings of Spring, we are treated to a night of excellent indie-rock in the appropriately named Spring & Airbrake. The Maccabees are currently touring on the back of their critically acclaimed third album Given to the Wild and given tonight’s performance, it’s no surprise to see how far this group’s star has risen.

Before The Maccabees take center stage, We Cut Corners provide the support for tonight’s main event. This two piece from Dublin, who provide a big sound with just a set of drums and a guitar, play a short set that sets up the evening nicely. Songs like ‘Dumb Blonde’ ‘Toll Free’ and ‘A Pirate’s Life’ tell lovely bittersweet stories, filled with wit.

After We Cut Corners finish their set, The Maccabees open with ‘Child’, a dreamy song that signals the newer, bolder musical direction prevalent in the new album. This has no ill effects with the crowd, who are already enamoured with the six piece from Brighton. You might be forgiven for thinking that hits from Colour It In and Wall Of Arms would be ignored, but this is not the case. Songs such as ‘No Kind Words’ ‘X-Ray’ and the anthemic ‘Love You Better’ recieve a rapturous reception. Orlando Week’s voice carries a spectral quality to it, seperating the band from the swathes of indie rock groups currently in circulation.

The set itself leans towards the new record, but this is to be expected. and songs such as ‘Feel to Follow’ and ‘Pelican’ have the audience bouncing. The band disappears to a chorus of “One more tune!” from the audience, and after a few minutes they reappear to play a few more songs, finishing with the epic ‘Grew Up At Midnight’.

A brilliant performance indeed, and we can only hope the Maccabees take this on board, and return sooner rather than later.