Describe in a tweet: Dramatic wouldnt be in it. 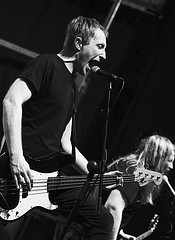 What happened?: Everything happened. Not even halfway into this headline performance, Johnny Black announces that bassist Herb is leaving the band. There had been a palpable sense of 'something' going on from the opening bars of the set and clearly this had been playing its part. As always, Lafaro are an awesome machine to watch. Every member of the band is a draw, from Alan's frenetic drumming, Dave's hair (which seems to have become a living, independently headbanging entity atop his head), Johnny's laconic snarl and of course the dervish-like Herb at the head of a rhythm section pincer movement, flanked by guitars. Once the departure is announced it seems to have chased an elephant from the room and they open up, rattling through new material like 'Easy Meat' as if they were setlist staples. Familiar tunes such as 'Mr. Heskey', ' Great Conversations Remembered..' and 'Leningrad' are all like being repeatedly pinned down by the ears and given a punishment kiss.  While some gripe at, and some adore the corny stage banter, musically, there is no flab. Its all essential. 'The Ballad of Burnt Dave' and especially 'Tupenny Nudger' are now simply something akin to national anthems. This band are special, their chemistry is unique and there is going to be one hell of a sizeable pair of shoes to fill for Lafaro over the summer.

Sow's Ear: The fact that the Lafaro juggernaut needs to be halted - albeit temporarily - is a frustration, given the immense sound of the new material that has been showcased in recent gigs. Simultaneously more riffage and more punk attitude bodes well. Herb, take a while, think about it and come back home.

Pigstock Rating: 9/10 (and thats because we dont want to have THAT argument again).