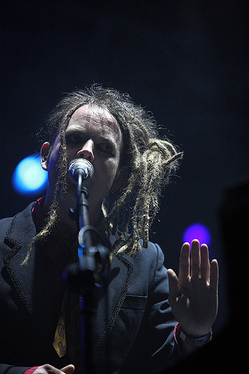 What went down: In the context of Belsonic as a three day event,  'Dukebox' was pretty low key. For a start, when compared to Dizzee and 2manydjs, Saturday night's turn out is distinctly average. And Duke Special's fanbase are notably older. They're also notably polite and pretty sober. Such a novelty, given what we've witnessed at this venue in the previous 24 hours.

However, in the context of... well, what this actual is - a day of mostly Irish performers selected by Belfast boy Peter Wilson - Dukebox is still an absolute treat and a total success.

As for Duke Specials headline set - apart from everything else, it's a pretty precise reminder that with two great records under his belt, Duke Special has more than enough tricks up his sleeve to justify a headline slot at the country's biggest music festival. Opening with the delicate 'Slip of a Girl', performed without a band, is quite brave - but it totally sets the tone. Peter Wilson owns this crowd. 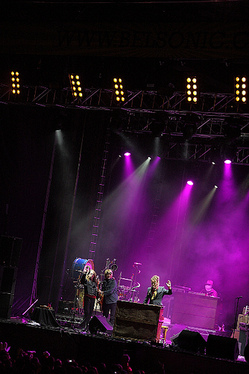 He also has the respect of his peers - Katie Richardson from Katie & The Carnival is the first of a handful of local musicians to wander onstage - helping out with both vocals and dance moves on 'Sweet Sweet Kisses', which now incorporates two huge umbrellas.  'Brixton Leaves' works particularly well in the open air, soaring across the cold night sky - the first of a few epic and memorable moments. 'No Cover Up' is along shortly to remind us that Duke Special is at his best not with the theatrics, but when quiet and reflective.

'The Jockey Club (A B*tch called Wanda)' encourages the kind of vaguely daft ragtime jiving we may require to stay alive during such weather (seriously, it was freezing!!) while the dark, messed up Jazz of 'Nothing Comes Easy' is the highlight of the entire set/day - making great use of both Duke's saxophonist and the invisible keyboardist (you had to be there) at the back of the stage.

The highlight: Apart from 'Nothing Comes Easy', Duke playing 'the hits' at the end and finally riling up a very reserved gathering.

'Freewheel' is performed solo and allowed to breathe, while 'Our Love Goes Deeper' and 'Last night I Nearly Died' force our hero into the crowd and among the people who have put him here.

In short - a triumph. It needed to be.