Diary of a ‘mojo diet’: My unplanned month of mobile-only filming

Dougal Shaw has ditched his normal camera to film exclusively with a mobile phone for a month, in what he’s calling his ‘mojo diet’. (#Mojo is the hashtag used by mobile journalists to describe their craft online.) Here he records some of the early ups and downs: 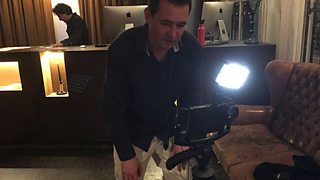 Filming mojo-style in an Amsterdam hotel lobby at 11.30pm after a delayed flight .

The diet began by accident. I turned up to film at a café, for a story about free wifi, and realised I’d left my camera on in the bag, draining my one and only battery. Rather than admit to this embarrassing fact, I casually switched to plan B: film with my phone instead.

I often use my phone as a second camera to give me a second shot in the edit, so I had a small tripod with me and a microphone for recording better audio. Afterwards when I reviewed the rushes and was satisfied with the results I had a revelation… Go full time on this. I was going to force myself onto a ‘mojo diet’.

I’ve done quite a bit of filming on my mobile before. In fact the most successful news report I’ve ever done was all filmed on a phone. And I find it very handy for interviews, to spice up an otherwise dull shot. I’ve even mounted it above my normal camera to get a dual wide shot. Today's editing software makes it easy to synchronise audio. It means one man can easily do a two-camera shoot these days.

Previously I’d done occasional binges of mobile-only filming as a video journalist who works solo. Now it was time to follow a strict diet. I was due to go to Amsterdam to cover The Next Web conference, providing a perfect opening challenge.

The first benefit to mobile filming is that you travel light, which means you can shed pounds quickly – financially speaking. Rather than take a cab to Heathrow, I was able to jump on the underground with my rucksack, which also contained my overnight essentials. The second significant saving came at check-in. There was no need to pay around £30 for a bag in the hold, where my tripod would normally go. Finally, I sailed through security. Usually my large camera kit (a Canon C100) gets pulled up for inspection. 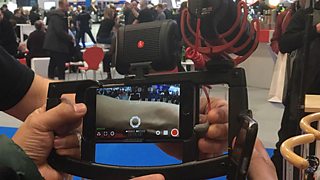 My mobile phone, an iPhone 6SPlus with the Filmic Pro app; an iOgrapher rig (above) to hold the phone, which also comes with screw-on lenses; a Manfrotto tripod that extends up to head height but collapses into a rucksack; Rode VideoMic Go and Rode clip mic; MacBook Pro with Final Cut X editing software; headphones; a long selfie stick. This has all been built up after a mixture of recommendations and random inheritances at work.

In lots of ways the mobile came in handy. Using an extendable selfie stick I was able to achieve aerial shots with my phone, which almost resemble drone footage. I couldn’t have done that with a normal broadcast camera.

But there were some moments when I missed my normal kit. When I filmed TaskRabbit CEO Stacy Brown-Philpot (below), who is dark-skinned, it was a very bright day with broken cloud. Lighting the interview was challenging and I missed the ND filters of my camera (which work like sunglasses) and also the viewfinder – it was very hard to see the shot on my phone’s screen in the light. 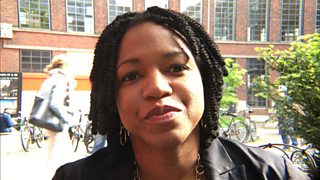 Luckily, I’m getting lots of practical advice about this sort of thing along the course of my diet. This is because I’m chronicling it on Twitter. My colleague and friend (and experienced cameraman) Christian Parkinson tweeted me to suggest putting a towel over my head to create a darkroom effect. Someone else tweeted me to recommend a phone app for fine control of exposure and focus.

My role in the BBC Business Unit is to create features rather than cover on-the-day news. This means there is less time pressure. Would I be comfortable to try a #mojodiet if I knew I was out creating content for the bulletins? Possibly not.

A six-hour train journey to Glasgow, via Edinburgh, once more made me appreciate the easily-packed mojo kit. I was in Glasgow to film an edition of another series I do, My Shop. To show off the shop I was at, TokyoToys, I was able to use the super wide angle lenses I can add to my phone’s rig. And again the selfie stick came in handy as I was able to film the dancing manga staff from above their heads. You can see some of those shots here.

All the contributors in this piece were quite nervous to be interviewed. I found that filming with the phone put them at ease – this was an object they were used to being filmed on (below). With a large camera I’ve seen people get intimidated and clam up. But this didn’t happen, even when we were discussing challenging subjects like autism and manga. On the other hand I’ve had middle-aged or older guests appear taken aback when a mobile is used to film them “for the BBC”. They’re not sure it’s quite right… 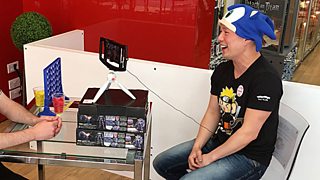 I was sent down to an exhibition in Pall Mall, London, to cover the auction of Pele’s memorabilia ahead of the sale. While there I was offered a surprise interview with the great man himself. To record an interview with Brazilian footballing legend Pele in the middle of a huge media ruck is nerve-racking enough. To do it on your mobile is even more daunting! (Definitely one for the scrapbook, that's me with Pele, below.)

This one had to be on mobile as we were doing a Snapchat on the BBC News account. Snapchat stories expire after about 24 hours but you can still watch it on YouTube.

Doing a Snapchat reminds you of a clear benefit of mobile filming. You can promote your story straight away by directly uploading the clips you’ve just shot onto Instagram, Twitter and Facebook. 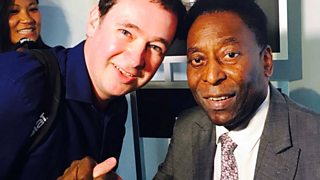 In my version of mojo I edit on my laptop. Some practitioners say you should also edit on your mobile for the full mojo experience. Although there are plenty of good apps, I personally find it too fiddly to edit on my phone. I spend quite a lot of editing time improving the shots and the audio.

After Pele came a very different assignment, but one that would test the mobile phone kit very well. It was a trip to Kensington Olympia for the InfoSecurity Europe conference. Busy events like this, with thousands of attendees, noisy stands vying for attention and multiple speaker events taking place, make for a challenging soundscape.

It was BBC World News who had asked me to go, to interview a cybersecurity expert, so the sound had to be good enough to run on television. What I found was that even on the floor of the exhibition, right in the middle of the bustle, I was able to record decent audio with the clip mic. I tested it before committing to film this way. 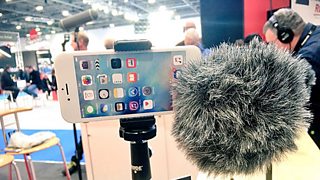 The Filmic Pro app has level meters, but also allows for auto gain correction and enhanced voiced recording, which helped. Not only did this piece run on World News TV, the audio was good too.

There was another benefit I noticed. Never mind cybercriminals, at any large conference I’m paranoid about taking my eye off my kit in case it gets stolen – not easy when you have a heavy tripod, large bag and contributors who want you to be in three places at once. The light mojo kit definitely offered peace of mind and also meant I didn’t have to fear bashing anyone in the head with a metal tripod – easily done in a heaving crowd.

However I did come to appreciate my normal tripod a little more in the edit. There were some shots where I had some camera shake, because I’d been standing on a plinth which shook when people walked nearby. Unfortunately, my light tripod quivered the phone with each step.

The Academy’s section on filming and recording, including on smartphone

Deadly realities for journalists in Libya, as attacks and kidnappings go unreported