Would it be possible to make a standard BBC News TV package for network television entirely filmed on a smartphone? Business correspondent Joe Lynam and I decided to find out: 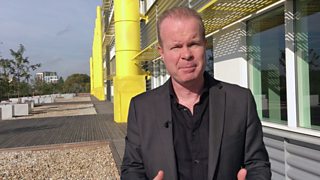 “The direction of travel is clear. The more mobile and the more independent a correspondent is, the more value he can offer the BBC.” That’s how Joe Lynam (above) explained to me his motivation for going mobile.

He sought me out because he knew I’d made plenty of features shot purely on mobile. From my point of view, it was a chance to work with an accomplished correspondent and produce a standard package for network television, rather than my normal fare of quirky, online features.

The story we settled on was a new hub for technology companies being unveiled at the site used for the Olympics in east London. With all the kit I needed in my rucksack, I met Joe at Stratford tube station.

It quickly became clear that he had already embraced mobile to a certain extent and appreciated its power: “I’ve been filing radio pieces and TV [audio] tracks from my iPhone from home and in the field for a few years already,” Joe told me. “People are amazed when you tell them you recorded it in your pyjamas under a towel!”

As usual, the PR officer and interviewees were a little surprised that the BBC had turned up with so little kit. But any sense of disappointment soon turned to intrigue and a host of questions. 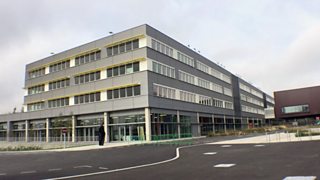 First I showed Joe how the smartphone, with its wide lens, was well suited to filming the huge technology hub building (above).

To show it off even more, we added a super-wide lens. Joe had lots of ideas about the shots he wanted and was impressed that the Filmic Pro app let you do ‘pull-focuses’ and control the aperture. 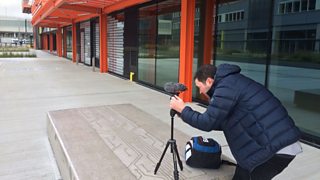 Next we had our appointment with the CEO of the project, Claire Cockerton. Getting some set-up shots was easy. In fact I got some great overhead ones of Joe being shown a model map (below), which didn’t make it into the final edit. But this is a good example of something you can’t do with a ‘normal’ camera - overhead shots achieved by lifting the light phone high up while it is safely attached to the extended tripod. 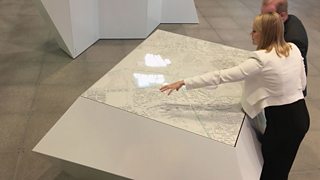 For the interview with the CEO we got a nice shot using natural light, that showed off the huge space that is being turned into the hub. With a smartphone you will struggle to get the pleasing ‘blurred out’ background effect that some crave. But often in news - and certainly in this case - we wanted to show off the background as it was relevant to the story. So we didn’t want a shallow depth of field. 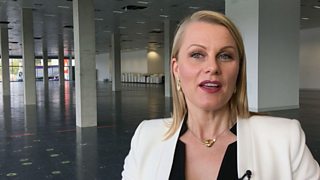 No blurred background: Mobile comes into its own when the environment is part of the story 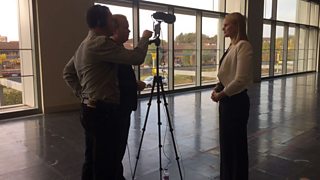 For the sound we plugged the i-XLR adaptor into a standard tie mic. This meant I could monitor it with headphones. However, the mic is a little sensitive in this arrangement, something I’m still working on.

Our second interviewee, software company boss Gary Hargraves (below), was more of a challenge. “The downside of this tripod is that we can’t get the eye line for our guest, who is six-and-a-half-feet tall,” Joe pointed out. Earlier I’d boasted about how small it was when stored in my bag…

Joe was right. My tripod is fine for people up to about six feet. So we had to set it on top of a table. And to get a good eye line, Joe had to perch awkwardly on the table while trying not to wriggle - which would wobble the lightweight tripod.

There are compromises like this when mobile filming and you just need to adapt. 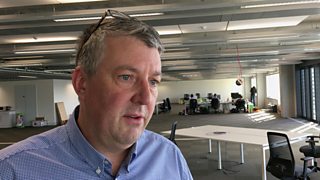 The last shot we needed was Joe’s piece to camera (top image), which we wanted to do outside on the building’s roof. Here’s how Joe later reflected on the problem:

“Because the aperture wasn’t nearly as good as a standard TV camera we couldn't get the shot we wanted, which had the actual Olympic stadium behind me. The sun was too bright and we couldn't see anything, so we had to reverse the shot and cut to separately taken pictures of the stadium.”

The cameras normally used by BBC Newsgathering would still have struggled to get this shot - but something might have been possible. I didn’t have any neutral density (ND) filters for my phone, so couldn’t control the light well enough to attempt it.

Another compromise was that we avoided doing a dynamic piece to camera - though I’ve since learned how to use radio mics with the phone, so that will be possible in future.

Once we’d found some of the archive video we needed, the edit on my Macbook using Final Cut X was straightforward enough. And Joe challenged me to try something new which I’ve now added to my workflow.

He files for BBC Radio 4 by speaking directly into his phone, he assured me. I assumed that method wouldn’t be good enough quality. I usually record voiceover track in a recording booth.

But in the spirit of adventure we followed Joe’s method and it worked fine. It was faster as we could email it directly from his phone to be downloaded on my laptop.

From start to finish the news package took six hours to make. It ran on BBC London’s Sunday teatime bulletin, so it reached network TV - our goal. You can also watch it on the BBC News website.

One regional newsroom tweeted us straight away to congratulate us and ask for tips on doing it themselves. Hopefully our trial will inspire more people to give it a go.

Other BBC Academy blogs on mobile journalism by Dougal Shaw

The Academy’s section on filming and recording, including on smartphone

Stephen Nolan on sensitive interviewing: Be human, be kind, be real