My Mojo Diet: Two years on 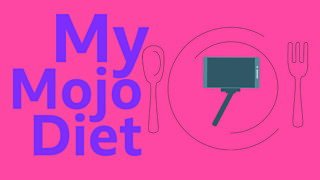 Two years ago video journalist Dougal Shaw went on a ‘mojo diet’ (mojo stands for mobile journalism). The diet involved ditching his normal, broadcast camera. Instead he used just his smartphone to film his online and TV features for BBC News. Now he’s taken his diet one step further:

My ‘mojo diet’ was so good I’ve stuck to it ever since. It’s made my journalism leaner and more practical.

Gone are the days of lugging around huge bags containing my camera kit and tripod. This is a big deal when you’re working on your own. Everything I need can be easily fitted into a small rucksack when I’m filming with my smartphone. I’m as nimble as a radio journalist.

But recently I decided to shed a few more pounds. I ditched my tripod, even though it’s light, it took up a lot of space in my bag. And I also decided to abandon my battery-powered LED light, which is about the size of my smartphone - and slightly heavier. 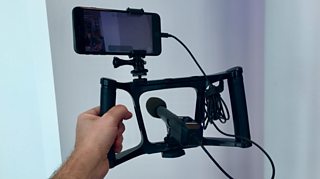 I wondered if this would free up my filmmaking. I was reminded of the ‘Dogme 95’ rules of cinema, which is followed by Scandinavian directors Lars von Trier and Thomas Vinterberg. They tried to make their films more naturalistic by banning tripods, artificial lights and music.

I decided to try this approach. I work for a programme called World Hacks where I conceive, shoot, edit and report short-form video features for a News audience.

My first chance to use the technique was a story about community volunteers who learn to use laser guns to catch speeding motorists. 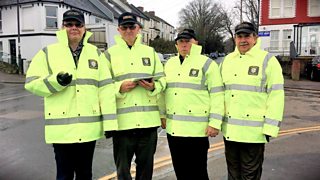 I filmed this piece entirely handheld, with my smartphone secured in a rig.

For GVs (general views, in this case atmospheric shots like passing vehicles), the lack of a tripod was no problem. The smartphone being light, it’s easy to hold steady - especially with a rig with handles.

I edit my videos on my Macbook, using Final Cut X. This has a very good stabilisation feature if required, which can fix shaky shots in a matter of seconds by cropping them slightly.

Filming interviews handheld was less convenient than with a tripod. But on the plus side, if you have a contributor who likes to move around, you can easily move with them. 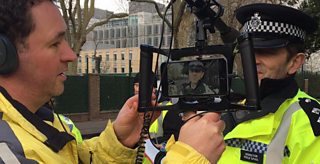 Not using a light was no problem. I was filming in the afternoon in classic British weather, which suits mojo: an overcast day where consistent cloud coverage acts as a kind of light diffuser.

You can see the film I made here. As well as a lighter feline sub-story I stumbled across.

I don’t think the average viewer would notice the lack of tripod and lights. I immediately found that having less kit makes life easier.

But I also realised something else. It made the filming process more fast-paced and natural. The simple handheld mojo rig meant less faffing around, fewer awkward pauses while you get things ready.

This is important because any moments when you leave the contributor waiting, interrupts the flow. It gives him or her a chance to reflect on the artificial nature of filming. Their contribution can become stilted. 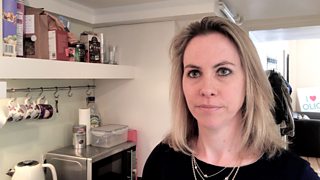 My second film using this method was about an app that allows strangers to meet up and share unwanted food that otherwise would have gone to waste.

Along with a World Hacks colleague, I arranged to follow a so-called ‘food waste hero’ as she went around north London one evening, collecting waste food from restaurants, then sharing it with people who visited her home.

On one hand, this was perfect for my new set up. My super-light mojo rig is well suited to fly-on-the-wall filming, as events unfold quickly.

As people met for the first time and went back and forth in the host’s house, I didn’t need to ask anyone to repeat their actions for the sake of television.

However, as this was filmed at night, the fact that I didn’t want to use my LED light panel was an issue.

In general I find that smartphones are very good at handling low light conditions. Filming outside, where streetlamps lit the scene, I was in fact able to get some nice, high-contrast, atmospheric shots.

But in one instance the available light I tried to use inside a shop for an interview was disappointing. It was only in the edit I could fully appreciate that these shots were a little soft and grainy. 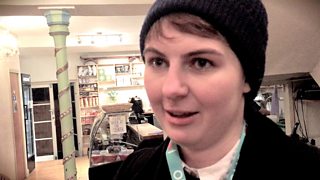 You can watch the film here.

I was also able to use this fly-on-the-wall approach to good effect in two pieces that involved filming with homeless people. 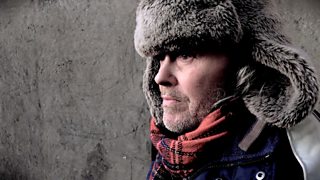 The first was about a charity that helps homeless people when they’re admitted to hospital. You can watch the film here.

The second was about a scheme in Oxford designed to let people donate money to homeless people using their smartphone. You can watch the film here.

In both these stories I encountered something that often happens in mojo assignments. People who are not used to being filmed and are obviously nervous, seem relieved and relaxed when they see you’re using a smartphone, a familiar object - indeed, all the homeless I filmed with owned their own smartphones. 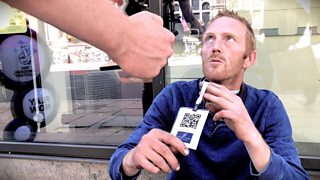 You can film discreetly with a mobile phone in public

The smartphone is something many people have used to film with themselves, with family and friends. If nothing else, it’s an icebreaker to talk about. Also, if people are happy to contribute, but are uncomfortable about being seen to be filmed in public, smartphone filming is perfect, because it’s so inconspicuous. 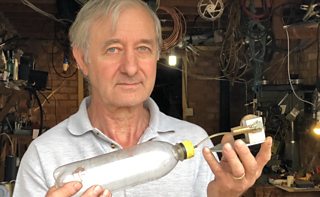 My final assignment during this modified mojo diet showed that filming dynamic action on a small and large scale can still be achieved without the tripod.

I was making a film about a part-time inventor who had developed a way to power refrigerated lorries with liquid nitrogen.

Using my handheld mojo rig, I filmed experiments with miniature pistons in his workshop. I captured trucks being loaded with pallets full of milk by forklift trucks. And I filmed cylinders being pumped with liquid nitrogen as white clouds poured out.

You can see all those moments here.

The lack of a tripod was not a problem. Being light, it’s easy to hold the phone for a steady shot. Or I could simply lean my small rig on a steady surface. 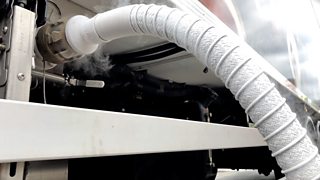 A lorry being filled up with liquid nitrogen

Does this method make for films with a more natural feel? I think so. When we experience our day-to-day lives, we don’t have completely steady tripod views. So a little movement in a film is arguably perfectly natural (as long as it isn’t so shaky as to be distracting).

Nor do we normally encounter people in real life who are perfectly studio-lit, with three-point lighting. So I would argue removing tripod and lights can add to the naturalism, as long as you take precautions.

Incidentally, one drawback people often point out about mojo is that there is no zoom. (You can swap lenses, but there is no adjustable zoom). Mojo practitioners will tell you “your legs are your zoom”.

If something is happening far away, you have to physically go there to film it. That’s why mojo is not suited to wildlife or wedding photography, for example.

But here again I would say, this is just like real life. Our eyes can’t zoom. Filming mojo isn’t just practical, convenient and a great way to keep your subjects relaxed, it’s inherently naturalistic.

You can get more mojo tips by following Dougal on Twitter: @dougalshawBBC

Progress in VR: when the content is more interesting than the technology

iOS 12: Plenty of potential for mobile journalists, but it may take time