Facebook down, online comedy up - and other Middle East social media trends that journalists should know about 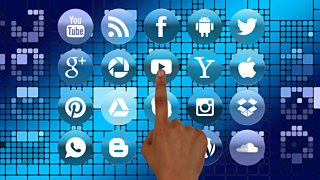 Here are four top trends that journalists and news organisations need to know about:

To reach out to MENA’s youth, you need to be aware of their apparently insatiable love for video.

YouTube is viewed daily by half of young Arabs, according to the 16 nation Arab Youth Survey. Meanwhile, the Dubai Press Club found that video is the most popular online activity for young Arabs. Those between the ages of 15 and 24 spend an average of 72 minutes a day watching videos online.

Back in 2015, I wrote about YouTube’s growing popularity and about the potential of online video to add “to the stickiness and understanding of news content”. Research by Northwestern University in Qatar (NUQ) suggests that news audiences are indeed migrating online: “the news-viewing TV audience declined by 20 percentage points since 2013 with a nearly identical rise in news-viewing online,” they note. TV news is still ahead of online news by 67% to 55% but it looks like only a matter of time before online overtakes TV. 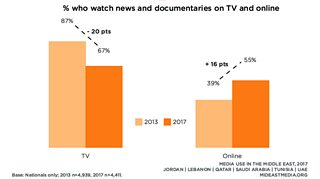 2. Social video is not broadcast

In 2014, I commented on the emergence of online comedy stars in the region. Since then, this genre has continued to grow (see below). Two popular comedy providers, EyshElly and Salute Sa7i, each have more than three million YouTube subscribers. 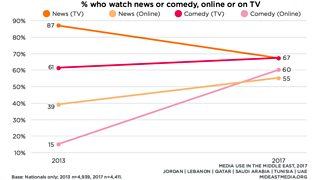 3.  Older social networks may have had their time in the sun

Five years ago, there was already talk of ‘Facebook fatigue’. Usage of the social network which, with Twitter, was identified by some as having played a pivotal role in the Arab Spring, was starting to wane in some markets.

Fast forward to today and it looks like these older, more established, social media platforms are being usurped by younger rivals. Although Facebook has grown its MENA user base by 264 percent since 2012, journalists might consider de-emphasising the importance that they attribute to this traditional platform. Reach among Arab nationals was down from 94 per cent in 2013 to 74 per cent in 2017. Since 2015, among nationals, Facebook usership dropped from 76 per cent to 55 per cent in Saudi Arabia, also dropping in UAE and Qatar, NUQ found. 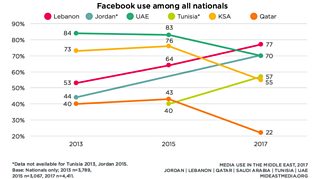 In the MENA region, there are currently 63 million Instagram users, accounting for ten per cent of total global users. That’s remarkable since MENA is home to just over three per cent of the global population.

Instagram is also growing fast among young people in the region, with daily usage up 20 per cent year-on-year according to the annual Arab Youth Survey.

Snapchat, another visually oriented social network has 33 million users in the Middle East, according to Snapchat’s own data, as reported by Wallaroo Media. It too has grown quickly in the region, with the result that last year, Snapchat opened its first Middle East office in Dubai in order to work more closely with advertisers and partners in the UAE and Saudi Arabia. 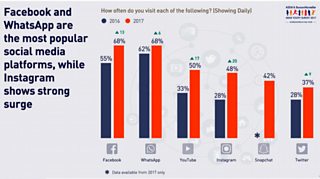 WhatsApp also continues to expand its reach in the MENA region. It was the most popular social channel in 2017, based on usage among Arab Nationals, NUQ data shows.

Messaging services are a growing source for finding and commenting on news, as well as other issues such as conversations around food, family and religion. And, of course they’re also a means for newsrooms to source important eyewitness media.

The popularity of group messaging, coupled with the wider usage of chat/messaging apps and newer social networks like Instagram and Snapchat cannot be overlooked. Their star is in the ascendancy, but whether that continues in 2018, we will have to wait and see.

How to improve your mojo skills by sacrificing a latte

How they make The Crown sparkle