From the Docklands to Dhaka: calling the midwife to Bangladesh 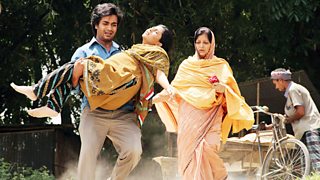 Terri Coates is the midwifery advisor on Call the Midwife. Earlier this year she went to Bangladesh to advise the BBC's international development charity BBC Media Action on their maternal and child health drama series Ujan Ganger Naiya.

In April, I found myself in a tent in rural Bangladesh, in 46 degree heat, teaching young Bangladeshi actresses how to breathe as if they were in labour. Not quite what you might expect from an NHS midwife and midwifery lecturer. But then I have an unusual job. For half the year, I’m also the advisor to the BBC One drama series, Call the Midwife, where I help the actors and production team depict pregnancy and births in the East End of London of the Fifties.

When I was invited by BBC Media Action to advise the cast and crew of a new TV drama in Bangladesh, I was intrigued. Bangladeshi TV had never shown a woman in labour. While the maternal death rate in the country has fallen dramatically in the last decade, pregnancy and childbirth still claim the lives of around 20 women a day, leaving plenty of material for the drama to highlight and explore.

Though there was a language barrier, being on the set of Ujan Ganger Naiya, (Sailing against the tide), was in many ways like watching the BBC crew on Call the Midwife. But there were some very marked differences. One arose when I produced one of my most reliable props.

On Call the Midwife I make sure the pregnant characters move and walk as if they are really pregnant and not just wearing a prosthetic tummy. I coach them to make the right noises and to breathe correctly. In midwifery, we often use dolls as props and I took one to Bangladesh to tie to the stomachs of the actresses to help them get used to moving around with an abdomen that wouldn’t bend. When I took the plastic baby doll out on set and put it on a table, it provoked an amazing reaction.  The cast and crew were completely enchanted. It was kidnapped for two days by the doctor on the set who took it home in his car. Over the course of my time there it was passed around among the cast and crew, and of course I left without it when I returned home.

Part of my role was to guide the recording of the first ever TV birth scene. The cast and crew of Ujan Ganger Naiya probably had less experience of childbirth than my colleagues in the UK.  Bangladesh is a conservative country and child bearing is not discussed very much.  The crew were all men and unlike their UK counterparts not one had experienced childbirth. They looked particularly uneasy during the rehearsal for a birth sequence! This was a first for all of us but I think we did it in an appropriate way and didn’t show anything that should not have been shown - the most you ever see is an ankle.

On Call the Midwife we’re very keen that portrayal of anything clinical or medical is as accurate as humanly possible. Likewise, in Bangladesh I was extremely impressed with the level of research and amount of preparation that had gone into the programme.

It was gratifying to be able to help the crew to show an accurate portrayal of childbirth on television for the first time. And with my lecturer hat on, I was extremely excited to put out health information to many millions of people at one time.

Switching between the reality of midwifery and the fictional world of drama means I have a unique perspective on childbirth. It can be a bit surreal though. Back at my normal job, when a woman has just given birth, I do sometimes feel tempted to say to her, “Well if that wasn’t quite right for you, perhaps we can just rerun it one more time!”

Terri Coates is midwifery advisor on Call the Midwife.

The BBC Proms on TV