It’s been a few months since we proposed to move BBC Three online and in that time there’s been a lot of speculation about what this means for fans of BBC Three and for the BBC in general.

We promised to come back to you by the end of the year with our thoughts and with this blog post I hope to allay some of the fears, explain our reasoning, give you an idea what new BBC Three could be and hopefully get you as excited as we are.

A selection of clips from popular and critically acclaimed BBC Three programmes.

So why reinvent BBC Three?

BBC Three launched in 2003. That’s before the iPhone, Facebook, SBTV, Netflix, Snapchat, driverless cars and a man jumping from space.  The world’s changed and what millennials and Generation Z want and expect from the BBC has changed. To meet their needs as licence fee payers we must offer them a service and content they want.

Our proposal is to re-invent BBC Three for the digital age and to take risks with ideas, talent and technology. We want to take what’s great about BBC Three and what’s great about digital and merge the two, to give audiences something of the digital world, not just in it. This isn’t moving a TV channel and putting it online. This is new. We are the first broadcaster in the world to propose something like this.

Scheduled TV will remain strong for the foreseeable but young audiences consume more on-demand content and watch less linear TV than they did four years ago. Put simply, people that watch BBC Three are more likely to be online and want new content and new forms of content, online.

And we haven’t just made this up. We’ve spent months asking thousands of people from all walks of life how they consume media and what they want. We’ve looked at research from both industry and academics. Our conclusion is that this is the direction of travel. It’s earlier than we might have liked, but it is what we would have done in the long term to give young audiences what they tell us they want.

And let’s be frank, it’s also down to money. The BBC will have less money in the future.

To maintain quality on BBC One and BBC Two – which are watched by young audiences in the millions - we needed a radical AND innovative approach. We simply can’t make the same amount of quality content with less money unless we start salami slicing programme budgets, and we know that’s not good for audiences. New BBC Three would allow us to do fewer shows but bigger, better and in greater depth.

What would be on new BBC Three?

This is where I think we can be truly innovative and meet the needs of young audiences. New BBC Three would be built around two pillars which our audiences have told us they value, Make Me Think and Make Me Laugh.

Make Me Think would be a mix of documentary, current affairs, news and drama that would cover topics that offer new perspectives and open people’s minds to new subjects or issues. Make Me Laugh would be centred around scripted comedy, like Uncle or Gavin & Stacey, plus personality-led entertainment that would be both provocative and edgy. Both pillars would cover topics audiences are passionate about. This is what audiences have told us they want from a public service, service like new BBC Three.

The other area we can innovate with is digital content. 80% of new BBC Three’s budget would be spent on long form shows like Murdered by My Boyfriend and Bad Education.

The other 20% would be devoted to new form digital content. This would include a range of content which we know young audiences consume and we want to innovate in - short form video, image led storytelling, votes on reactive topics or blog posts from contributors that will make people laugh and think and deliver a richer experience around our content. Imagine the Revolution guys being able to react to the 4p porridge story and getting something out on the day, or publishing an animated interview with the mother of a victim of a domestic abuse straight after Murdered By My Boyfriend. 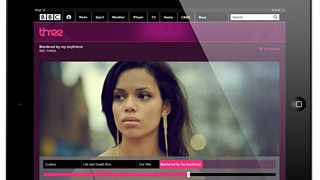 Murdered By My Boyfriend on new BBC Three

This 80/20 mix would extend and enhance the BBC Three experience and be of the moment, giving audiences more. It’s a radical change for a “TV channel” to propose committing such a significant amount of its budget to “non-TV” content but I believe this will lead to greater innovation and allow us to engage with audiences for longer and more depth than ever before.

This commitment to new forms and formats, of different durations, with interactive content is an opportunity to give more value to young audiences – to give them the content they have told us they want, when they want it, delivered to them how they want it. We could be innovative and responsive, reacting to events and producing content much more quickly than is possible at the moment, freed from the restraints of the linear schedule.

Our audience would also have a much bigger role to play in new BBC Three - shaping the editorial offer, reacting to it, being advocates for it, even creating it. By fostering a more open relationship through new platforms and social media our audience would become members of new BBC Three, not passive consumers. New BBC Three would give audiences a voice and give us the tools to showcase their opinions.

And collaboration wouldn’t end with audiences. New BBC Three could open up areas of collaboration across the BBC; with Radio 1 and Newsbeat as well as other areas like sport. You can see BBC Three working hand in hand with Radio 1 on subjects that matter to young audiences, on campaigns about disability, or crime or bullying.

Where could new BBC Three be?

It will be where young audiences are. At the centre would be a dedicated home online - available on multiple devices - that pulls all our long form and digital content together. Short form and digital content would be on social platforms like Tumblr, YouTube, Instagram, Facebook and Twitter and sites like Buzzfeed. A daily update from new BBC Three would offer a fresh immediate package of content that would make people think and laugh and would be shareable with peers. Long form would be on BBC One, BBC Two and BBC iPlayer and, subject to negotiations, via on-demand services on Sky, YouView, Freesat and Virgin platforms. We acknowledge some people don’t have broadband - which is why new long form content will be available on these platforms. It’s an interconnected world where each platform would be used to in a way that befits its nature.

Who will make stuff for new BBC Three?

And finally, another exciting element for me personally is who could make content for new BBC Three. New British talent will be the key - both on and off-screen but we know the BBC would need to develop our skill base to cultivate a better understanding of digital content and be resourced to deliver content like this on a daily basis. That means finding and nurturing a new generation of content makers who are of the digital world.

I believe new BBC Three could be the arrowhead for the whole industry - shaping and extending the “TV” market beyond linear and building demand for new forms of content. It could be a place that gives creative industries an avenue to test how audiences react to new forms of content at scale, content that builds new relationships with younger audiences. It could redefine public service broadcasting in the digital age. New BBC Three could do for digital content what BBC News Online did for take up of the internet, what BBC iPlayer did for the VOD market and what BBC Three did for digital TV a decade ago.

Moving BBC Three online is a response to a financially challenging climate, but that's not all it is. We think our proposal meets the requirements of our charter to innovate online, and along with the proposal to extend CBBC and launch a BBC One +1 channel, new BBC Three could be a pathfinder for the digital age and for the future of the BBC.

I'm excited by what we have proposed and I look forward to hearing what you have to say over the coming months and when the BBC Trust begin their consultation in January. This is the start. We don't have all the details yet and I'm sure things will come up along the way that we want to look at.

As Danny tells me, necessity is the mother of invention and I'm the mother…