'The best thing I ever did': the story of an Autumnwatch, Winterwatch and Countryfile apprentice 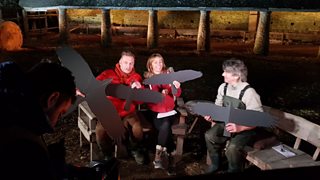 Working on Winterwatch as an apprentice in January

If you’d have told me last year that by now I’d have moved to Bristol and worked across some of the BBC’s flagship programmes, I’d have told you, politely, not to say such crazy things.

It took around a month into the apprenticeship scheme for me to get my head around the opportunity I’d been given. On leaving sixth form I think deep down I knew I didn’t want those university places but I definitely knew that I loved television, and when Twitter directed me to the BBC Apprenticeships page, this seemed like the best opportunity for me. Two unsuccessful applications, an online application, a video and group assessment day later, here I am.

I must have looked like a deer in the headlights during Autumnwatch, which we filmed just three weeks into my apprenticeship. I had no idea, really, what was going on, but I loved it – it’s hard not to as you couldn’t ask for a nicer team and there’s such a great atmosphere during the live show days.

Joining as an apprentice, I assumed that I’d be shadowing people and maybe doing some simple, non-crucial tasks. My first experience of a television show was standing in a live studio behind the cameraman holding the cable which broadcast the show to the world. If I’d have tripped, we’d have been off air. No pressure, then.

Winterwatch in January meant that I’d experienced the live shows so could really get stuck in as I knew what was going on. From cutting out life-sized corvid props, to sourcing a taxidermy woodcock, no two days are the same. The best feeling was sitting in the gallery with the director and producers while the show went live – to be honest I’m just in awe of everyone. They work hard and, at times, it can be pressured but all remain in good spirits.

My final placement took me onto the mighty Countryfile which is where I am still based. It’s perfectly normal on Countryfile to find yourself standing ankle-deep in mud holding expensive camera kit, and I was lucky enough to see a wild beaver too.

I’m often asked by non-telly people what we do when in the office – we organise shoots, complete risk assessments, and research programme content. It’s the less glamourous side of the job, but it’s interesting, and it’s really helped me to learn how television works.

I’ve also been fortunate enough to work on the Chelsea Flower Show and soon on the Antiques Roadshow thanks to my manager putting these opportunities my way. I think what I’ve enjoyed the most about this scheme is the people that I’ve been able to meet and talk to as they have countless interesting stories and fantastic advice for working your way through the industry.

Anyone thinking of applying to the scheme should go for it, as it really is the best thing I ever did. There have been many moments where I can’t believe that this is my job and that’s down to those who run the scheme and provide the opportunities for you.

I don’t have a degree, I’m just someone who really loves telly and talking to people. To have these opportunities so early on in my career is something for which I have to pinch myself on a daily basis.