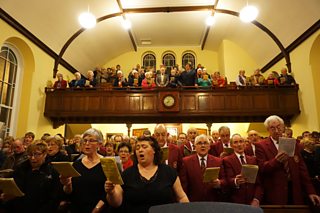 Radio 4’s Desert Island Discs celebrated its 75th anniversary by casting away a global star. Who then, is the David Beckham of Welsh language hymn singing? If you know the answer, let us know and we’ll be straight on the phone because at Radio Cymru, we have some celebrating to do this week. Caniadaeth y Cysegr, a hymn singing series first broadcast on the Home Service 75 years ago, is still going strong. 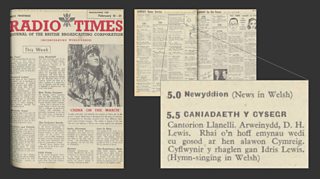 Look back at the Radio Times for February 15 - 21 1942 and you’ll find the Black-Out times noted prominently, alongside programmes such as Marching Songs of Britain and Sincerely Yours Vera Lynn. There too was Newyddion – a news bulletin in Welsh at 5pm, followed by the first ever edition of Caniadaeth y Cysegr, described rather bluntly as ‘Hymn Singing in Welsh’. Back then it did what it says on the tin and to this day and it’s proved to be a big hit across the UK, ‘in Welsh’ or not. Caniadaeth remains a ‘must listen’ programme on Sundays for those who enjoy and respect the tradition of Welsh language four part hymn singing and can surely claim to have played a part in keeping that tradition alive.

As a child, I remember standing next to my parents in chapel just about every Sunday struggling to keep the soprano line going, while listening to Mam and Dad singing alto and tenor. Mam used to sing, well, confidently and there was more than one Sunday my brother and I set off for the vestry with red faces, muttering that ‘everyone had turned round to look at our family!’

It was years later, when I joined a quite different kind of congregation supporting Wales at the Arms Park, that I realised singing ‘SATB’ wasn’t the norm everywhere. English fans just didn’t do it. It was then that it dawned on me that this was an inherent part of my Welsh heritage and that loud maternal altos aside (a mantle I suspect my daughter would say I’ve now adopted) it was a tradition to be appreciated.

And it is still appreciated. Chapel doors are closing, the number of Cymanfa Ganu festivals are waning and the tradition of four part choral hymn signing is weakening, there’s no doubt about that - but Caniadaeth y Cysegr remains a Radio Cymru favourite, not just a Radio Cymru stalwart. It was the success of Caniadaeth that led, nearly twenty years later, to the creation of a Welsh language hymn singing television series by BBC Wales in January 1961, Dechrau Canu Dechrau Canmol. In the same year, the format was adopted in English by the BBC in London, which in my hymn book makes Caniadaeth the ‘grandmother’ of Songs of Praise.

So we’ll celebrate. There’ll be no David Beckham. I doubt whether there’ll be much talked-about news lines or tattoos either but there will be pride that Caniadaeth y Cysegr continues to bring out the best in communities throughout Wales and more than anything, continues to inspire.

An uncertain future for listed events

My Notes on Notes on Blindness