A filming day in the life of Blue Peter

Thursdays are sacrosanct in the Blue Peter diary, they’re the day that the live programme is filmed and broadcast each and every week. The About the BBC team were invited by Editor Ewan Vinnicombe to Media City UK in Salford, to take a look around where the show is based, and to document a day in the life of the longest running children's magazine show in the world:

Upon arrival we clock this placard of the unmistakeable iconic Blue Peter logo. Along with bunting and barriers, it helps mark out the performance area in the piazza for the afternoon’s live outdoor show. The logo has stayed the same for the 57 years the show has been on air and is a constant in the lives of many a generation. 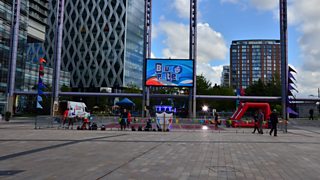 Onlookers are left in no doubt what is being filmed here today as a huge screen animates the show's title in front of the Blue Peter Garden. The weather looks a little undecided, but BBC Breakfast weather presenter Carol Kirkwood mentioned the show was outside today and thankfully forecast sunshine for the afternoon. 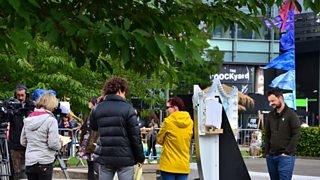 For the time being however, it's a bit chilly. Having been greeted by our host Ewan, we are then introduced to the show's presenters who are completely charming, explaining that they'll be in their 'proper clothes' after these rehearsals. For now though, it's definitely coats on weather.

Rehearsals with the production crew start at 2pm, but in the meantime a crowd of children start to take an interest in what's going on. 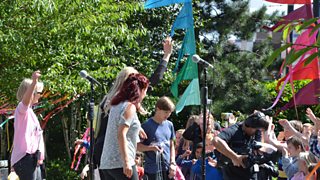 By the time the young audience is on set to film pre-recorded cutaways for the musical performance, the sun is out and everyone’s warmed up and ready to dance, with a little bit of helpful choreography from presenter Lindsey and Floor Manager Carmella and Researcher Portia..

Onlookers are invited to join the  audience members, as long as they will still be there when the show goes out live, and their parents are on-site to see their starring role. 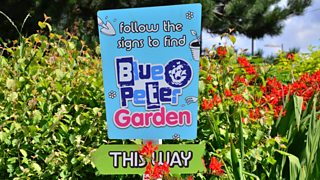 Tucked away behind the filming area there is an homage to the Italian sunken garden that stood in Television Centre from 1974-2012. Established by Percy Thrower who was the Blue Peter gardener from 1974-1987, our memory of that garden was of somewhere quite secret, with high walls. The Blue Peter garden in Salford has no such walls and is open to the public, meaning we could get a look at something we remembered, but never thought we'd see... 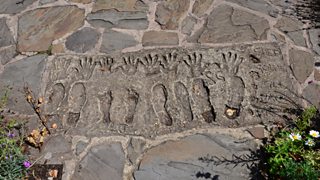 These hand and foot prints, made by presenters Peter Purves, John Noakes, Simon Groom and a shoeless Lesley Judd in 1978 when the garden was opened, were carefully transferred to the new garden in 2012. The paw prints are from the Blue Peter pets at the time, Shep, Goldie, Jack, Jill and Freda the tortoise. Blue Peter has featured had many pets on the show since 1962. 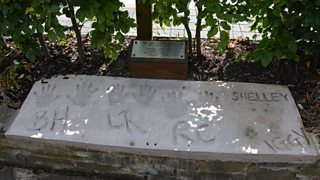 The current presenters also put their prints in the garden. Barney, Lindsey and Radzi are the 35th, 36th and 37th presenters of Blue Peter respectively. They have a way to go to catch up with the longest serving presenters Konnie Huq (female) and John Noakes (male). 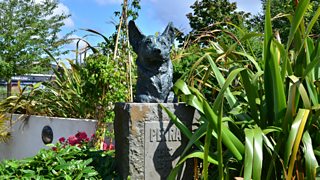 Petra was the first television pet, and this statue was outside TVC until being moved to the Blue Peter garden in 1984, and then on to Salford. Her moniker was recently given to Project Petra, a competition in collaboration with MI5, to search for three ‘CBBC Intelligence Officers’. 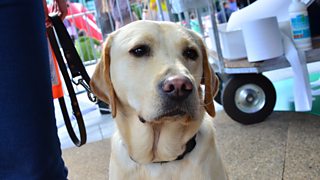 The current animals on the show, are Shelley the tortoise and Iggy (pictured) who is continuing a tradition of Blue Peter’s association of working with Guide Dogs UK, a tradition that began with Honey in 1964, whose training was paid for by viewers sending in foil wrappers and milk bottle tops. Iggy is going through her guide dog training at the moment and will graduate in early 2016. 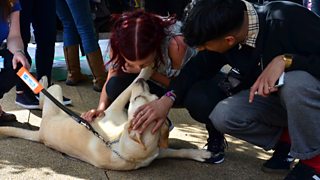 Today, however, is a day off from study and Iggy clearly loves the attention as Lindsey and CBBC presenter Karim (right) make lots of fuss of her. 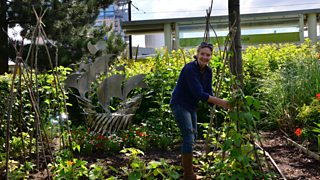 While nosing around the Blue Peter garden (and resisting the urge to nab some veg from the blooming Blue Peter allotment) we bumped into set designer Emma busy tending to it all.

On this day, the set she designed was empty (because they were filming outside) but we had a look around anyway. It’s a 360 degree design, something Ewan was keen to experiment with. 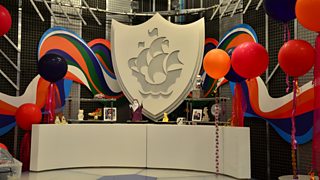 On entering the studio - aware we were experiencing something few had the chance to do - we immediately wanted to try our hand at standing in front of the desk and presenting. What also struck us was how much smaller and, well, greyer it appeared than on TV, a testament to the magic of cameras and lights, of which there are many. 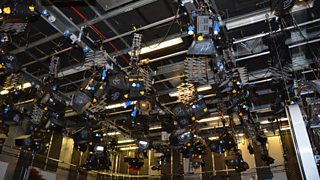 The ceiling is an extensive lighting rig that every week is tested by the variety of items featured on the show. Lee the lighting director creates a bespoke lighting arrangement for every programme. Over 100 lights including many energy saving LEDs help to make the Blue Peter set shine. The show is environmentally conscientious and uses the albert+ sustainable production rating system. 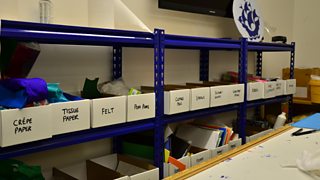 We were also shown round the ‘Make Room’, where the ‘here’s one I made earlier’ magic happens – sadly there was no sign of the sticky back plastic box. 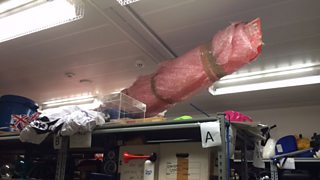 Then, in a room, usually only accessible by staff, we were shown some of the props from the show, including Blue Peter helmets from the many risky challenges presenters have done over the years, a huge box of Blue Peter badges (although this may have been empty) and Helen Skelton’s vessel with which she kayaked the entire length of the River Amazon for Sport Relief (that’s it in the red wrapping). 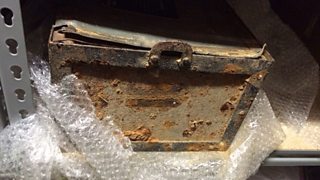 This store room is also home to a bit of Blue Peter treasure: Ewan guided us over bags of costumes and other props, and then pointed to something tucked away on a shelf -'do you know what that is?' We did, but were almost too scared to say, in case our hopes were dashed and it wasn't true. 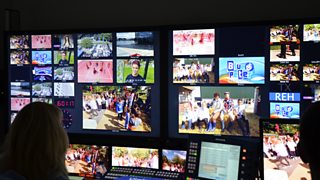 Nosing around complete we got back to the show: it’s broadcast live at 5pm and just one hour before that at 4pm, the cast and crew have a ‘dress rehearsal’ run through the episode. Here is a view of the gallery as it begins.

We got an insight into what the presenters hear in their earpieces, how intricate the timing of a live show with VT sections is and just how rhythmical filming a live music performance is as camera cues are called out in time to the song. 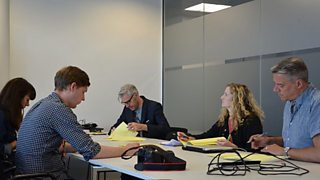 Following the dress rehearsal any last minute editorial changes are discussed amongst the team in a whirlwind notes session, including editor (and our host for the day) Ewan Vinnicombe (centre), digital producer Emma (first left), live producer Jamie (second left), series producer Zoe (next to Ewan) director Martin (next to Zoe). We're struck how calm and composed everyone is, even though we are just minutes away from live transmission. 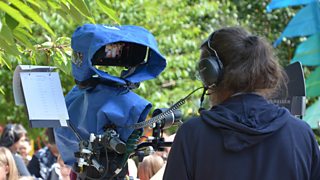 After these last minute tweaks the show goes live at 5pm. 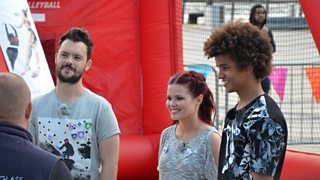 Here, in their 'proper clothes', Barney, Lindsey and Radzi get ready to introduce a section of the show about Seated Volleyball. 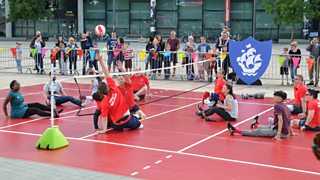 Presenters join the GB Seated Volleyball Team to learn how to play the sport. 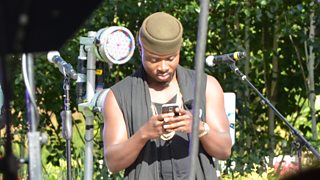 Musical guest Fuse ODG tweets followers that he is performing live in 10 minutes. 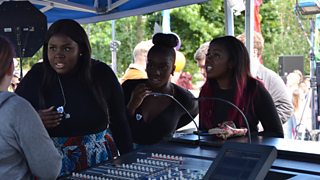 “Do we get to keep the badges?” Fuse ODG’s backing vocalists proudly display their Blue Peter badges and check on some technical details before they perform. 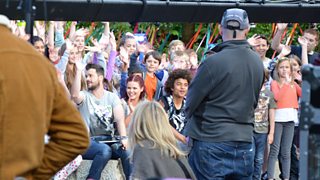 Then, all too soon it’s 5.30pm, and the end of show is already upon us. The boom camera swoops up as presenters and audience wave to the sky, and like the maritime flag that Blue Peter is named after, we realise 'this vessel is ready to leave'. 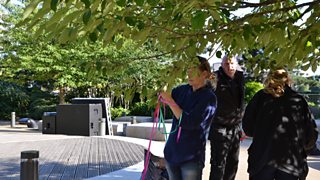 The show is over, for another week, the equipment is packed down and put away, Emma has to undress the trees. 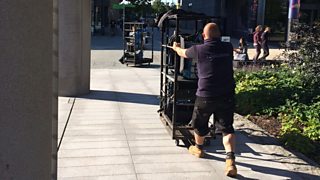 Everything is wheeled back inside and the Blue Peter placard makes its way back to the studio. It’s all over … until next week. 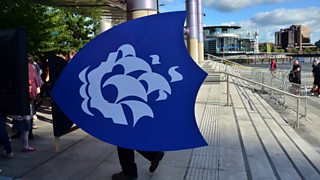 Blue Peter is broadcast at 5.30pm every Thursday, and repeated at 9am every Sunday, find out more about the show on the Blue Peter website.

The BBC and market success - is the licence fee a tax that grows the economy?