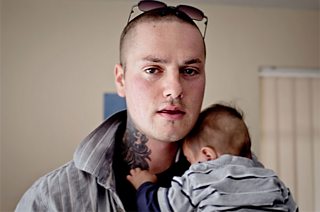 Shaun - one of the contributors in Protecting Our Children - with his baby.

Over on the BBC TV Blog series producer Sacha Mirzoeff tells how the new series of Protecting the Children came about and highlights some of the difficulties programme makers face when working in intensely sensitive subject areas:

It took months of hard work to try and persuade people to take part to show the real nitty gritty of the actual cases with families.

In the meantime all we could do was film the more straightforward parts that we knew would provide the 'glue' to make all the programmes piece together, like shots of the city, simple meetings amongst the social workers.

What was key was that everyone got used to us being around with our cameras, so when real action happened later we could film it, unhindered.

How do you even ask a family who are probably in the worst place of their lives whether they would like to consider taking part in a television programme?

Read the rest of Sacha's post on the BBC TV Blog

Whose job is it anyway?

A snapshot of age portrayal in the industry