World War One At Home is a project uncovering the stories of how the war affected places across the UK and Ireland. BBC broadcast teams are telling those stories on TV, radio and online, seeking to show the impact of the First World War on local communities across the country.

As well as releasing another 200 local stories, bringing the total now to 450, we’ve also created a special map on our WW1 At Home website, helping you to find the stories closest to you. Now, with a postcode, city or area name, you can find closest stories - or stories nearest to any given point - in the UK.

Being from Bristol – I discovered the following: that mustard gas was manufactured a mile away; that ANZAC troops played baseball on Bristol City’s ground at Ashton Gate; and Bristol Zoo provided much-needed R&R and a romantic rendez-vous for wounded soldiers.

What will you find? Give it a go. 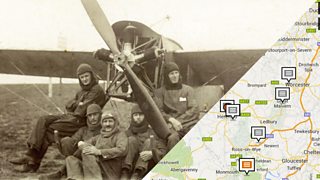 This project brought together the BBC’s Future Media team; Aerian, an agency with a strong track record of data-driven delivery; and the BBC’s Location Services department, whose mapping technology is already used on the local news sites, the BBC homepage and weather pages.

Presently a total of 450 stories are available stories online, there’ll be 900 by end of the year, and hundreds more by the end of 2015. As more stories are delivered, this straightforward way of discovering them will become more essential and rewarding.

The BBC’s Location Team also drives the services that underpin our weather and travel services – an essential ‘always-available’ source of information for our audiences. As BBC services become more personalised, location-relevant delivery will become more nuanced to our locations and interests. In this way, we now have the challenge of understanding what places our audience care about, and how the online experience can be tailored accordingly for individual users.

Over 40 teams across England, Northern Ireland, Cardiff and Scotland are delivering stories about places in their area, for radio, TV and online. My job in all of this has been to bring these teams together - to oversee the management of the data underpinning the project and to ensure our work integrates with the rest of the WW1 output. In this way, it’s been vital that the guides, social media, broadcast and downloads, are all findable on the World War One portal. Funded by BBC Learning, the project has given journalists from across the BBC a chance to work with historians in their area (provided via the inspired network of the Arts Humanities and Research Council) giving them a break from the usual short turn-around nature of their ‘day’ jobs, giving them a chance to delve into the history of their areas, and be part of a BBC-wide project.

For the audience, these stories reflect a turbulent and significant time in the UK’s history, but, with WW1’s usual focus skewed towards the bloodshed and battles of the Western Front, these untapped stories are ones ripe for exploration. The project highlights the momentous developments, technical advance and social changes of those years, which kick started the modern age. These stories show the individual experiences – how it actually felt to work in a factory, how local industry benefited from war, how it felt to be the first victims of air borne warfare, how the stately homes became hospitals and the pilots part of the wave of advances in aviation technology – the individual stories that scale up to the broader historical themes covered by broadcast and by the BBC iWonder guides.

As well as being findable by location, the stories are categorised by BBC radio station and theme. As numbers of the stories swell, new collections take shape – in the most recent update, we’ve brought together stories on the Real War Horses, Tanks, Zeppelin Raids and Children. To contrast how similar experiences across the country, and the common ground of this multi-faceted experiences.

The stories reveal the history of our streets, towns and fields. Some sites are still in use as they were, others have long since disappeared. It has also brought some amazing imagery online, brought to us from the archives and collections around the country. The people of WW1 gaze out at us from factories, commemorations, hospital wards and streets. Many of the journalists working on the project have collected then and now shots, that morph the present and the past, and appear like ghosts, making their stories feel even more relevant. See the gallery. 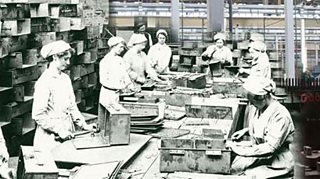 Historic image of workers at the Crittal factory. Braintree Museum

The journalists have found other ways to bring a modern twist to their storytelling. Letters from a Bristol family, written between a soldier and his wife waiting anxiously at home, have been turned into a haunting song – thanks to BBC Radio Bristol Producer Tom Ryan, and Sam Bonham from BBC Introducing. Daisy Chapman, a singer/songwriter, was approached and has written the song Last December. We’re hoping this can be released later in the year. Listen to this haunting song here.

Working on this project has meant working with amazing teams across the UK and uncovering little-known history, and I am delighted to be introducing the latest batch of stories. The project as a whole brings local relevance to the big stories. BY collecting these hundreds of stories together online, it will give you the chance - not only to get closer to your own WW1 stories where you live - but those from across the country. Where will you search?

Other ways to enjoy WW1 At Home

Find coverage of all aspects of the BBC’s WW1 season