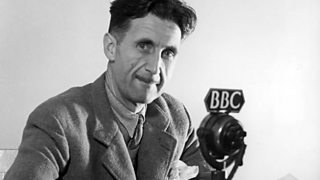 In a special post for the About the BBC Blog coinciding with a series of programmes of Radio 4, Front Row's Mark Lawson considers George Orwell's time at the BBC.

Although Eric Blair spent only a short part of his working life as a BBC employee – as Staff Number 9889 between 1941 and ’43 – his period as a Talks Producer in the Eastern Service crucially influenced the creation of two celebrated books that he subsequently wrote under the pen-name of George Orwell.

Biographers and critics have routinely seen the Ministry of Truth – a branch of government pushing out propaganda - in Nineteen Eighty Four (1948) as a disguised version of BBC Broadcasting House and surmised that “newspeak”, the euphemistic and deliberately confusing language used in his future society, was modelled on the BBC’s long tradition of bureaucratic jargon and rules about acceptable on-air language.

These connections are compelling to anyone who works in the BBC after reading the book. And, as the techniques and effects of propaganda are a central theme of the novel, it is obviously relevant and fascinating that the writer’s role at the BBC was directly involved  with the transmission of pro-British propaganda to India.

Revealingly, the documents from Blair’s staff file (now made available online by the BBC) make clear that his resignation from the Corporation resulted from dissatisfaction with this work: not the morality of it – his farewell letter insists that he never had to say anything on air that he didn’t believe – but with the efficiency of the tactics, believing that the Indian independence movement was impervious to the broadcasts. So it’s surely significant that one of the things the writer did with the spare time that he gained from leaving radio was to write a novel in which the central character is, for most of the book, resistant to the language of state persuasion. 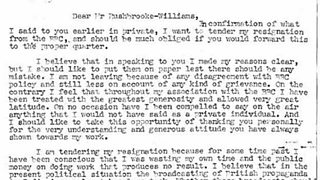 I would also, though, argue that the experiences of employee 9889  had a more positive effect on his two best works of fiction. The famous plainness and clarity of Orwell’s prose, although evident before he reached the BBC, were surely perfected by the time-limits imposed on Talks broadcasters and the encouragement to cut words or structures that might snag the reader’s eye or listener’s ear.

It’s also striking to me that  both Nineteen Eighty Four and Orwell’s other post-BBC fiction – Animal Farm (1945) - operate through euphemism or comparison; the former by imagining a future that commented on political trends at the time he was writing in the middle of the 20th century and the latter through an elaborate parallel world set on a farm.

Annoyingly, The Archers post-dated Orwell’s time at the BBC and the publication of these books and so we can’t claim broadcasting influence there. However, the use of fantasy or satirical exaggeration or the depiction of an imagined future for comparative effect are all literary techniques particularly associated with the radio talk from Orwell’s time up to the current A Point of View and Thought for Today. I am convinced that sustained exposure to metaphor and parable as rhetorical devices had an impact on his subsequent fiction.

So, as the BBC went into his writing to such a degree, it is fitting that his writing now goes into the BBC in this season of programmes.

Mark Lawson is a journalist, broadcaster and author.

The Real George Orwell season continues on Radio 4.Assistant Producer Lucy Collingwood writes about the season on the Radio Blog.

Digital Bristol Week: A model of collaboration for the future?